NEED SOMETHING FOR MONDAY NIGHT’S DINNER? GO TO THE MARKET AT CADENET…AND, WHILE YOU’RE THERE, POKE AROUND! 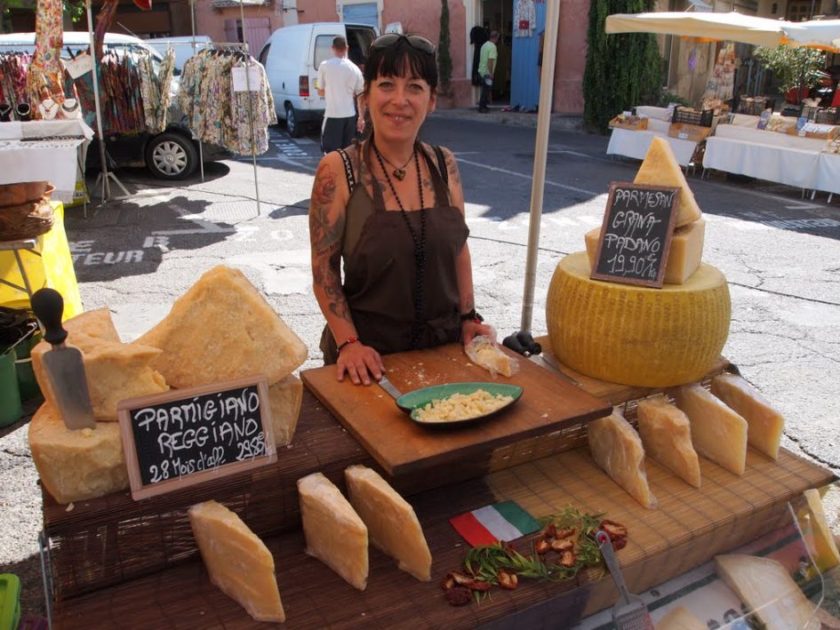 If you are a tourist planning your trip to Provence with the usual laundry list of places to go and things to see in a nano-second, neither Cadenet nor its market should be near the top—or even in the middle—of your list. But, if Monday has rolled around after a busy weekend and you forgot to plan for dinner or if you want to make Monday one of your days to putter, to discover, to experience life in the Luberon, make your way to Cadenet’s Monday morning market. You won’t find gaggles of tourists following tour guides or long lines of buses struggling to squeeze through tiny streets; but, you will find a decent market and an authentic Provençal town…and a lot more, if you poke around. 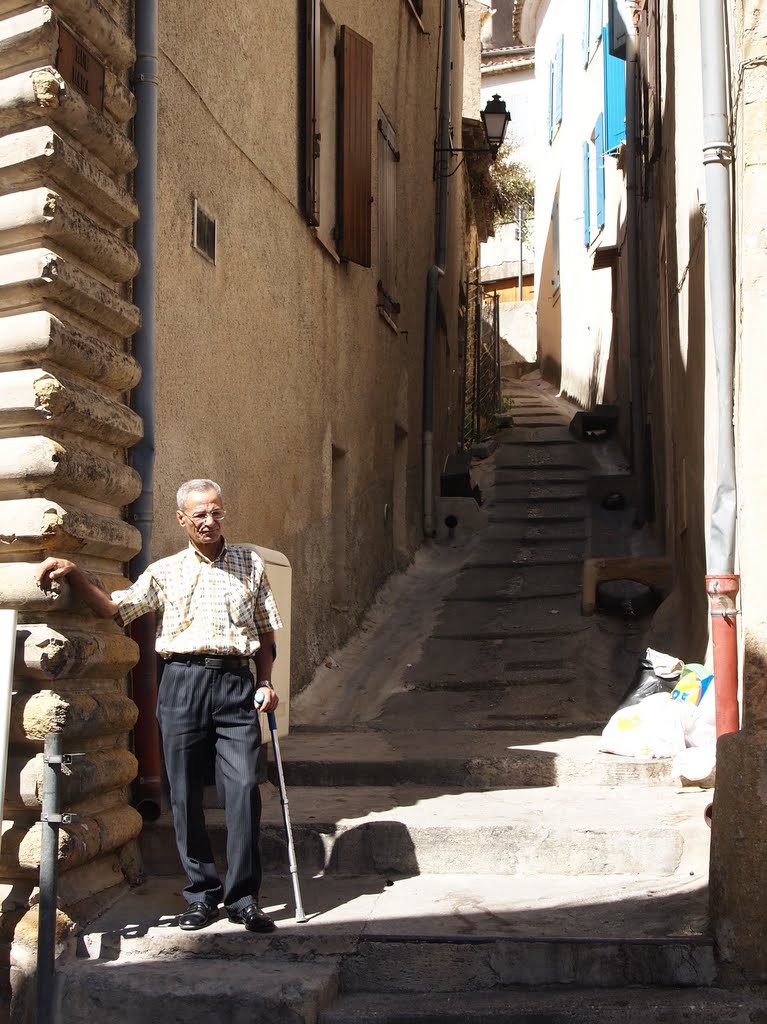 Cadenet, population around 4,000, has a long history. Strategically located above the Durance River, its expansive view of the comings and goings below were coveted by all those who wished to control the area. There is evidence of an oppidum—Latin word, loosely defined as a pre-Roman fortified settlement—that predates not just the Romans but also the Celts. The remains of oppidum walls and fortifications can still be seen just outside the center of town. The troglodytes—cave dwellings—in the cliffs were probably inhabited by this time, too. In the 8th century, the village was razed during Saracen invasions and, in the 11th century, it was rebuilt, including a fortified château at the top of the hill. The turbulence of the Middle Ages was more than the 11th century château could withstand: it was destroyed and rebuilt several times, leaving only ruins today. 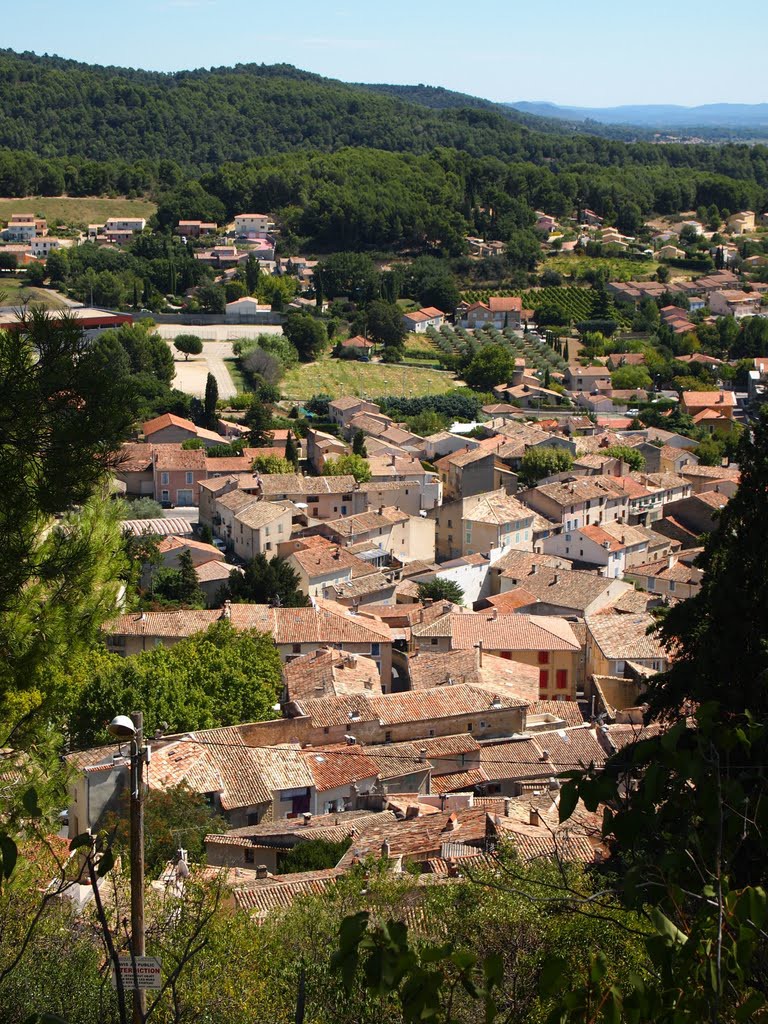 Even Cadenet’s Market has a long history: the edict that a Market was to be held every Monday dates back to 1566.

From Lourmarin (about 5 km away and the center of our universe when in Provence), you will approach Cadenet from the south, the direction from which either of the main roads will take you. You will see a cacophony of tiny homes—all topped with various patterns of terra cotta—climbing up the sides of a tree-studded hill toward the troglodyte dwellings and, at the very top, the remains of the aforementioned château. It’s an inviting sight, setting expectations that may need to be adjusted as you continue toward the center of town. 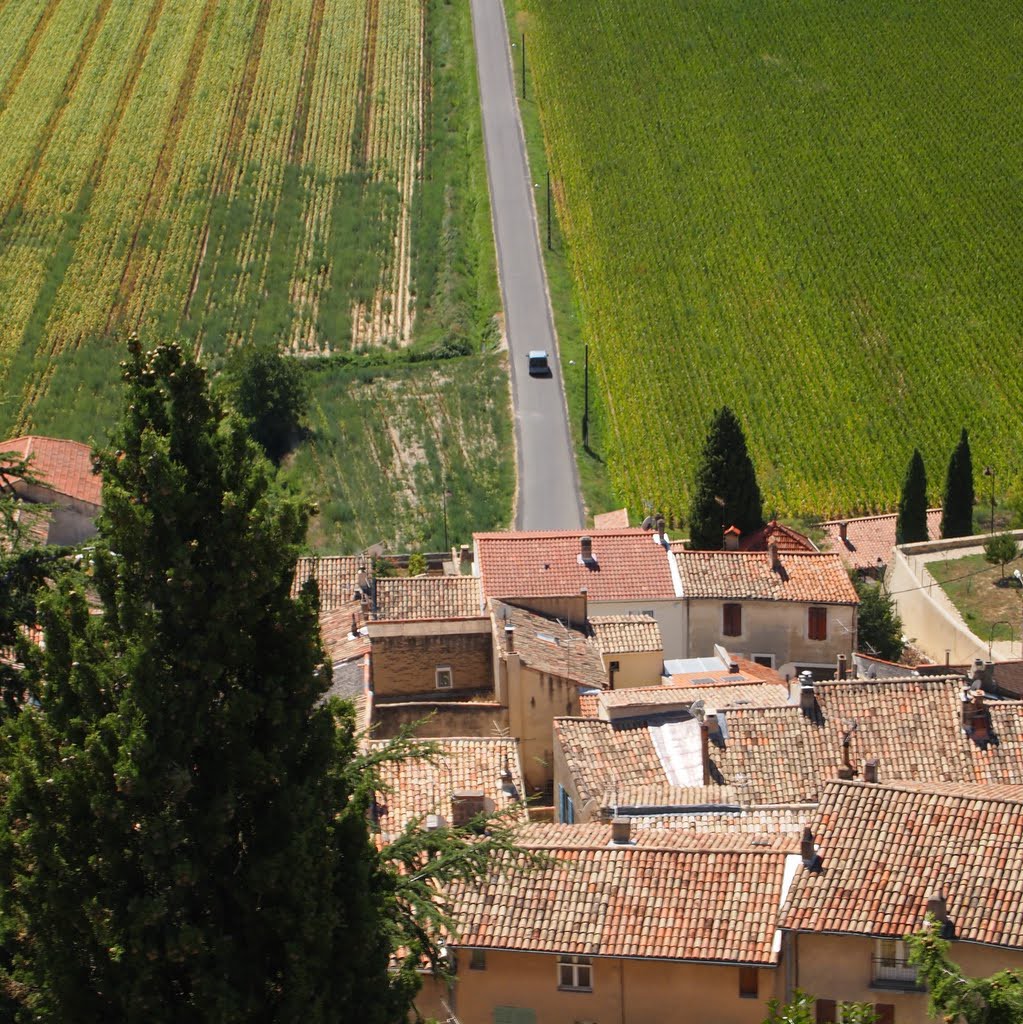 At the small (very small) traffic circle into which the D943 leads you, turn to the LEFT (away from the center). You will pass one of the main branches of Credit Agricole (which is closed on Mondays, but the ATM remains in service). Take the first LEFT, following signs for Cucuron, and continue along that road until you reach a t-intersection, with a church, Eglise St-Etienne, on your left (beyond the parking lot). Park around here, on the street or, in the busy summer months, turn right and follow the signs for parking in a nearby municipal lot (free). Walk toward the church (more on this church below) and pass it, as you walk toward centreville. You will see the Market in the distance. 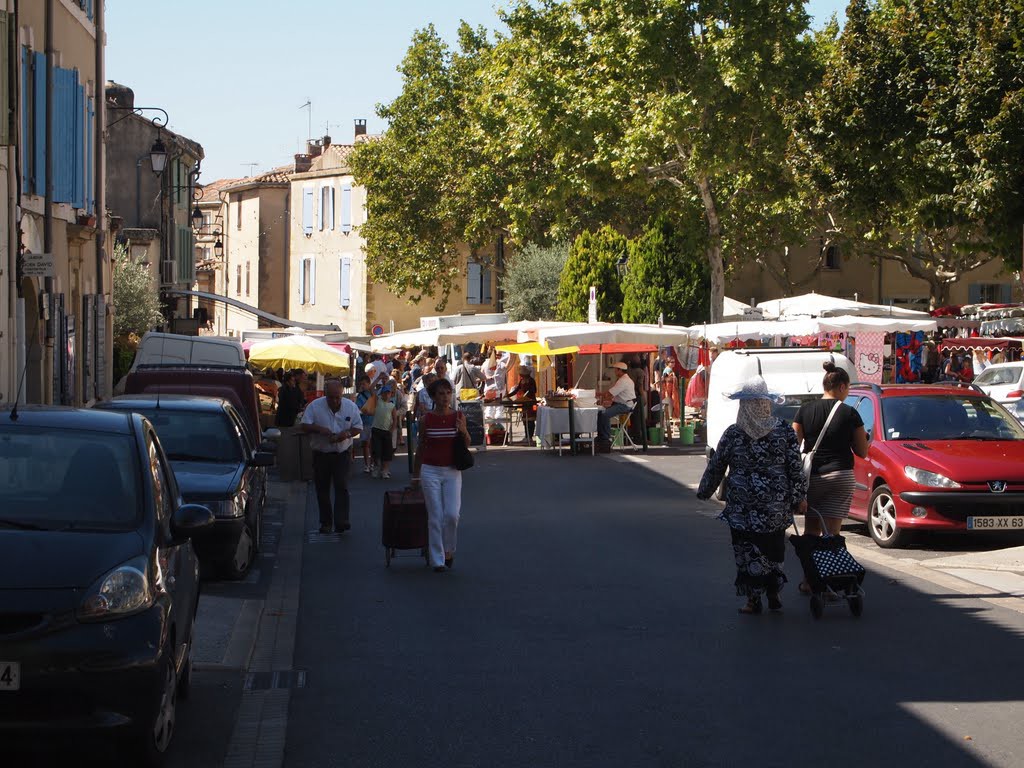 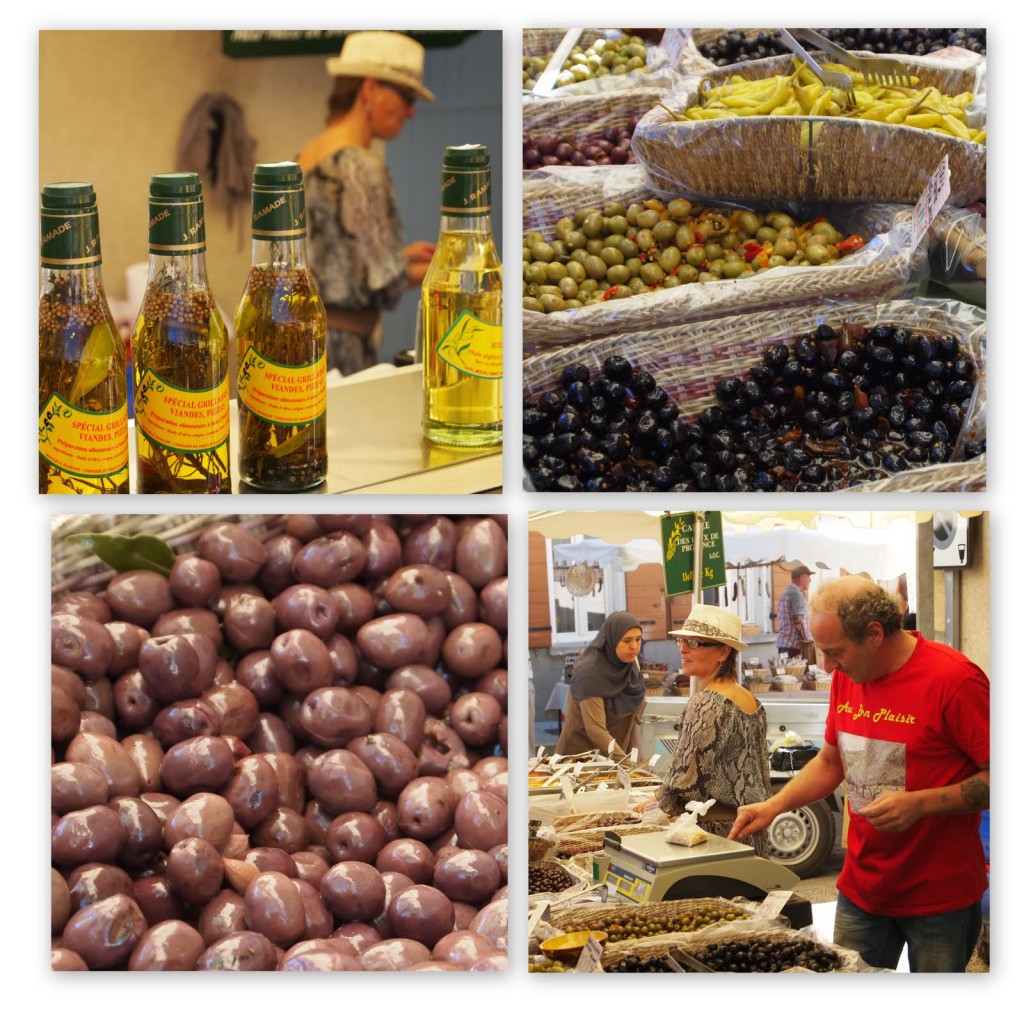 As you walk toward the center of town—designated by the “Drummer Boy” in his place du Tambour d’Arcole—you will find paella, pizza, Asian food, cheese, chicken roasting on a spit, soap, honey, and hardware. Interspersed among those items are an atypically large number of vendors selling clothes and accessories, ranging from the practical—underwear and socks featuring whoever are the currently popular cartoon characters—to the (arguably) fashionable sweaters and jeans, with headbands and flip flops in between. (In striking contrast to the Market in neighboring Lourmarin, there are very few scarves or linen blouses, dresses, jackets, and the like.) 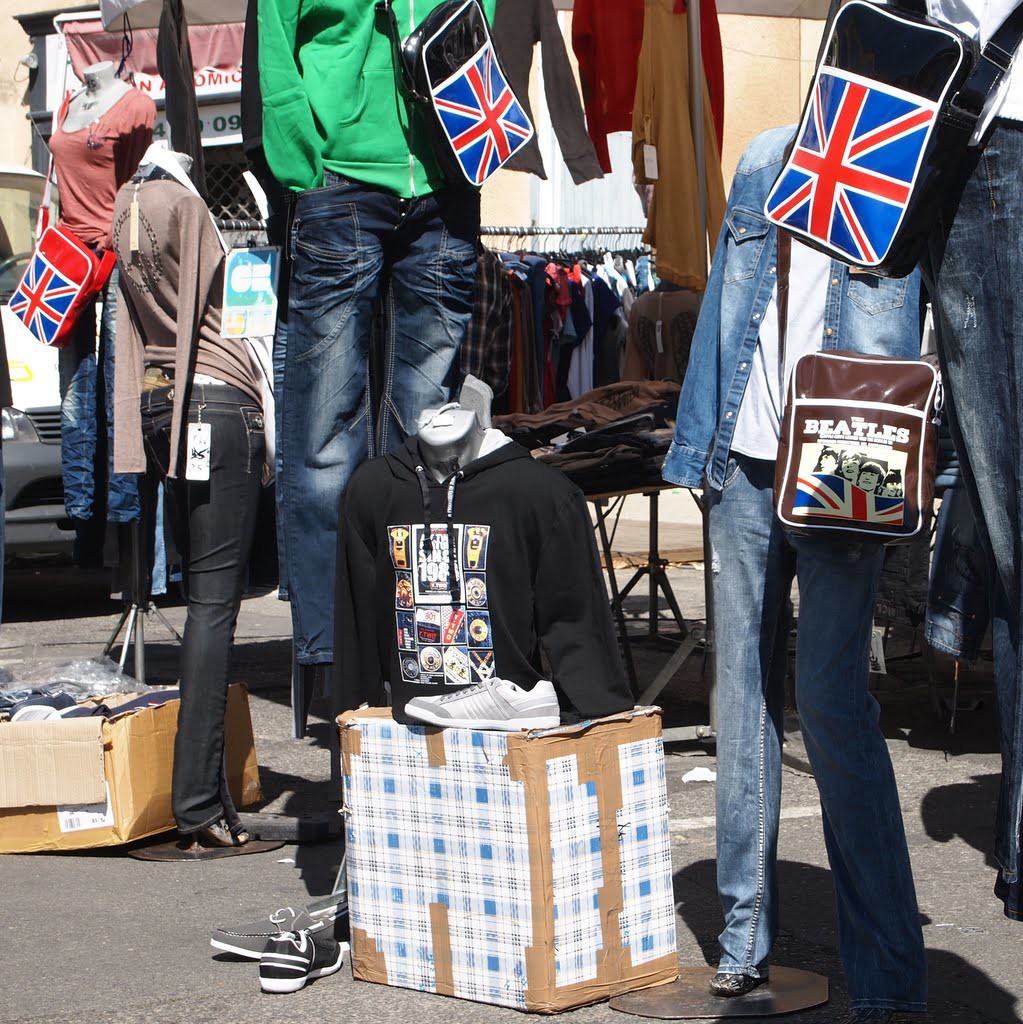 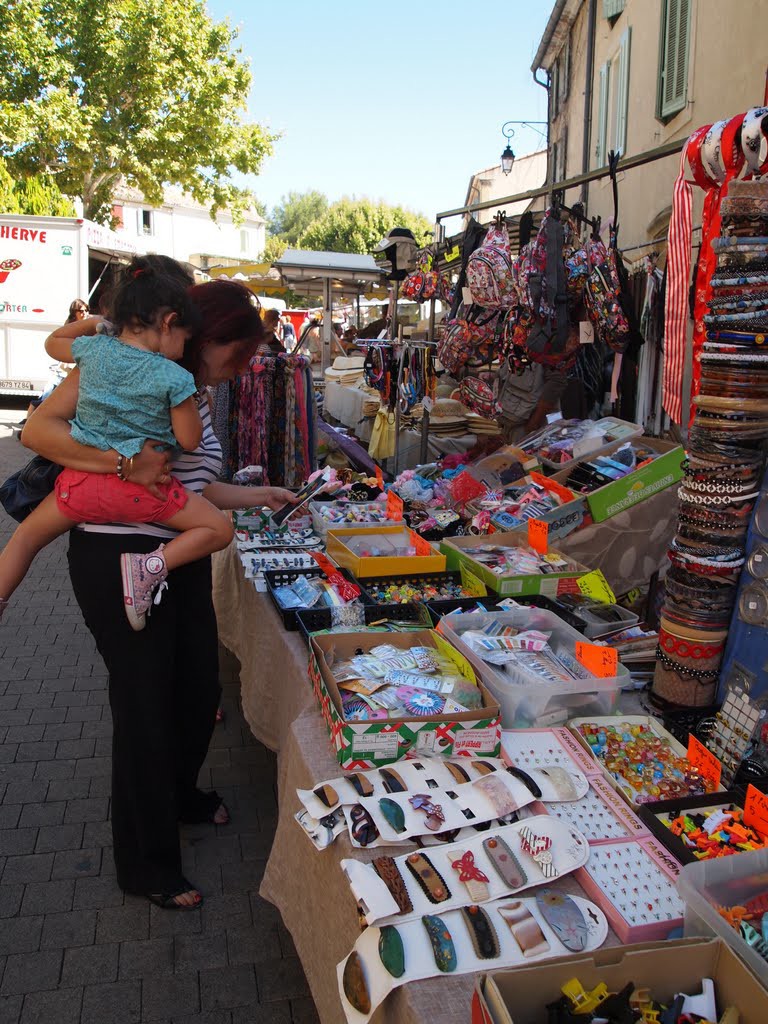 As always in the Markets in Provence, the aromas are so irresistible that my basket is quickly filled to the brim!

You will soon recognize the bronze statue, erected in 1894, of André Estienne. The name may not be familiar, but, if you have been reading those tour books, you have undoubtedly seen the statue of the “Drummer Boy” who joined the Luberon Regiment at the tender age of 14 and became a drummer in the Napoleonic army. During the battle of Arcole (Italy) on November 15, 1796, this young man swam across the Alpone River and, there, beat his drum so hard that the Austrians thought they were hearing the gun fire of the Republican Army from the rear, enabling Napoleon to charge and take control. The young drummer boy from Cadenet received the Legion of Honor at 26 years-old. It is a captivating statue—André appears frozen in motion! 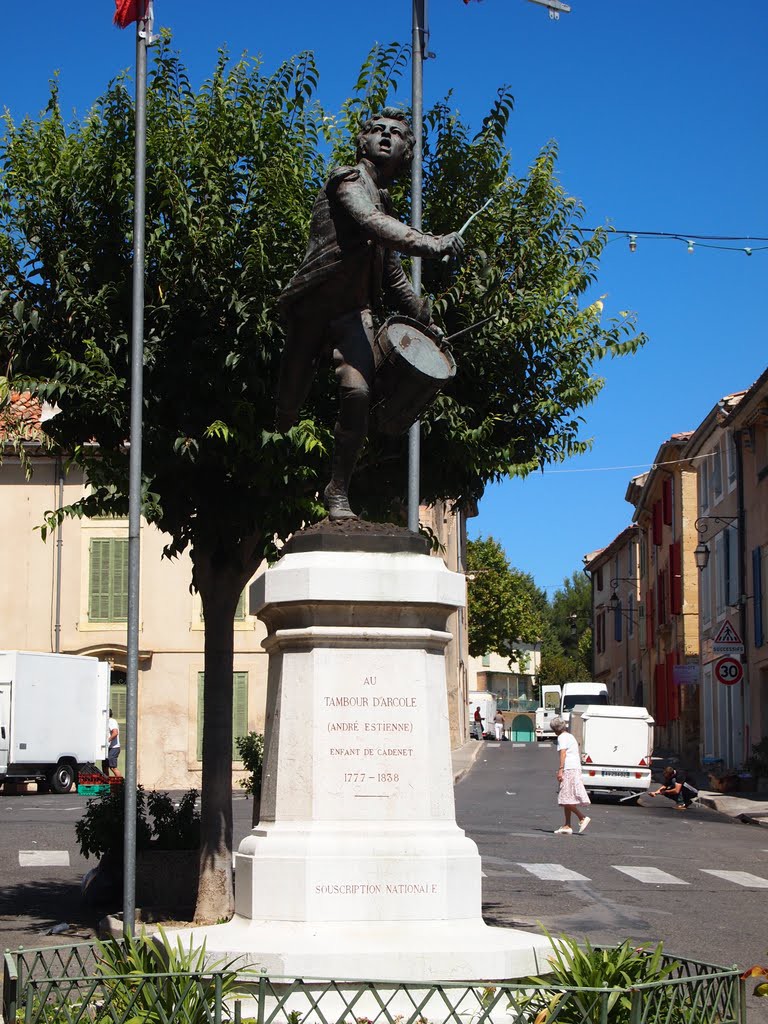 The Office de Tourisme is right there, on the place du Tambour d’Arcole, and Le Tabac is across the street. Guided tours are available through the tourist office during the summer.

As you begin to retrace your steps, pick up some bread from a very small patisserie, located just north of the place. The proprietor is an endearing woman with a warm smile who enjoys chatting with her customers. 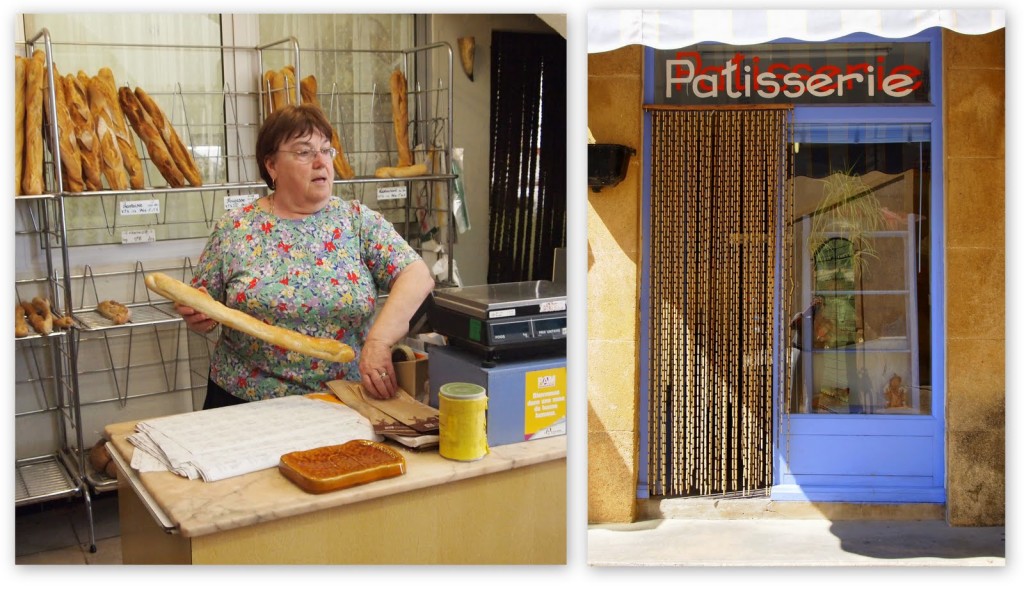 So, with your baguette in hand and your basket laden with goodies, what are a visitor’s options? Hmmm….picnic?

If it is a pleasant day—most are in Provence—we encourage you to go up to the top of the hill where what’s left of the château remains! The view is spectacular—that’s one thing the invaders could not destroy—and, on a clear day, you can easily see Montagne Sainte-Victoire and les Alpilles as well as the Durance River and the Luberon countryside. (This area has been turned into an open-air theatre—what a wonderful setting for a concert!) 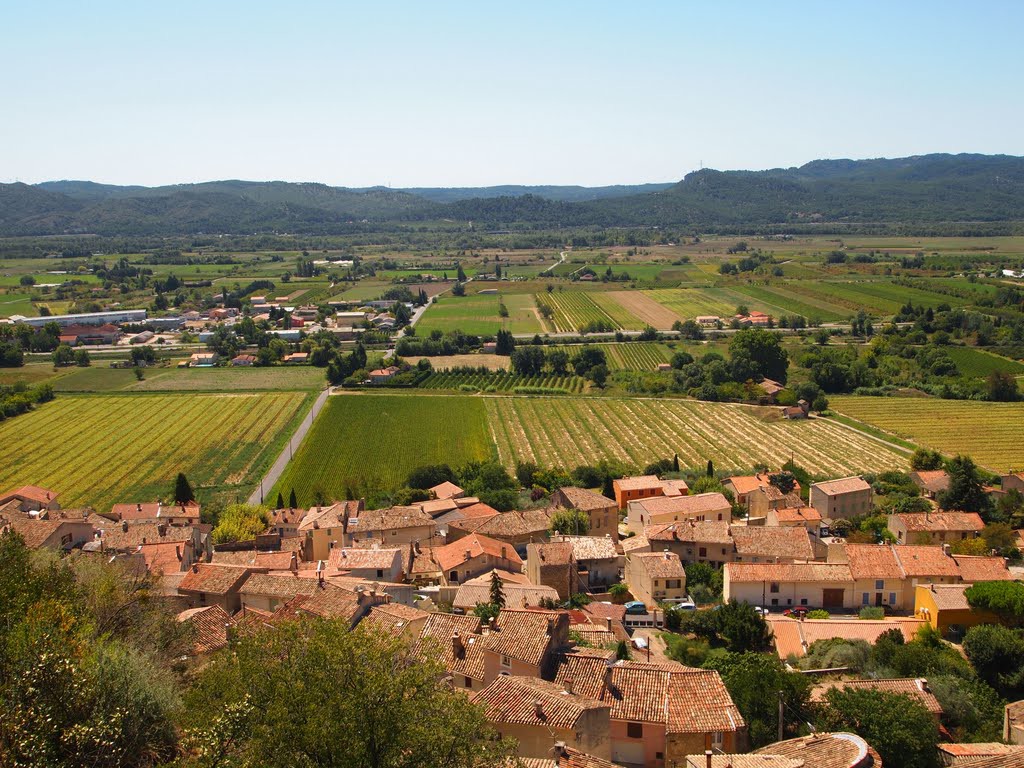 We suggest driving your car—the long and winding road is clearly marked—up to the parking lot atop the hill, although one can certainly walk. From the parking lot, the ambitious visitors can engage in the exercise circuit and the rest of us can walk around what remains of the medieval château that was destroyed during the Wars of Religion, replaced, and largely destroyed again during the Revolution. The troglodyte dwellings, as mentioned above, are thought to date back well over 2000 years. During the 16th century, the Waldensian Protestants sought refuge in these cave dwellings. Others continued to live in them until the 1960s. 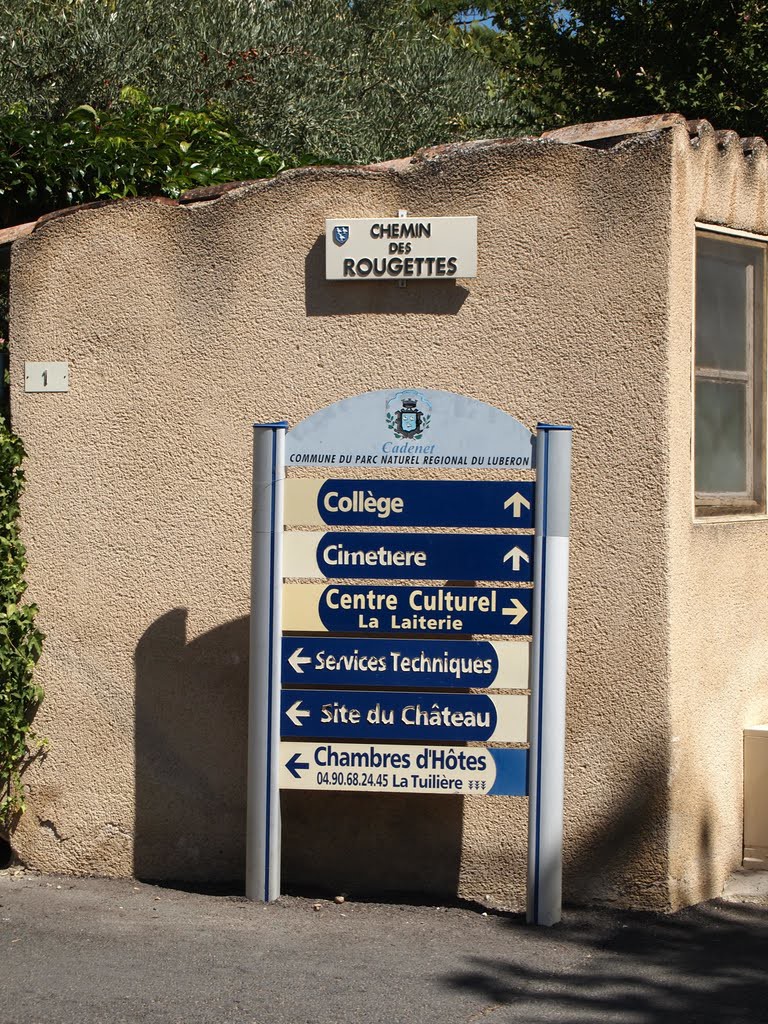 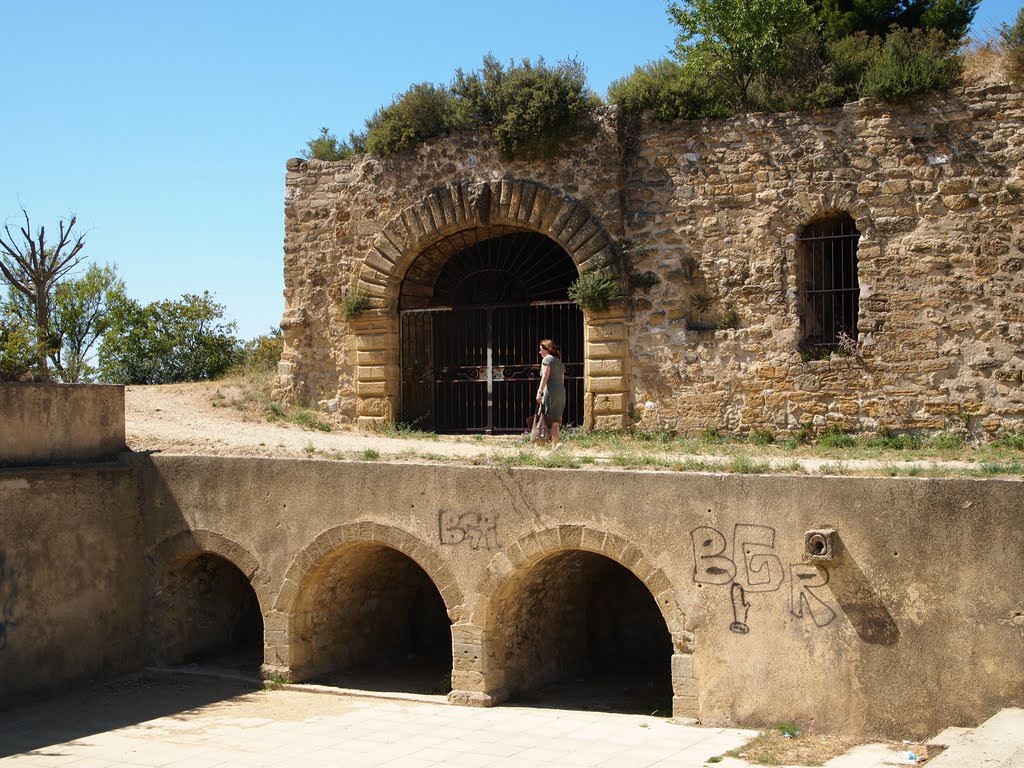 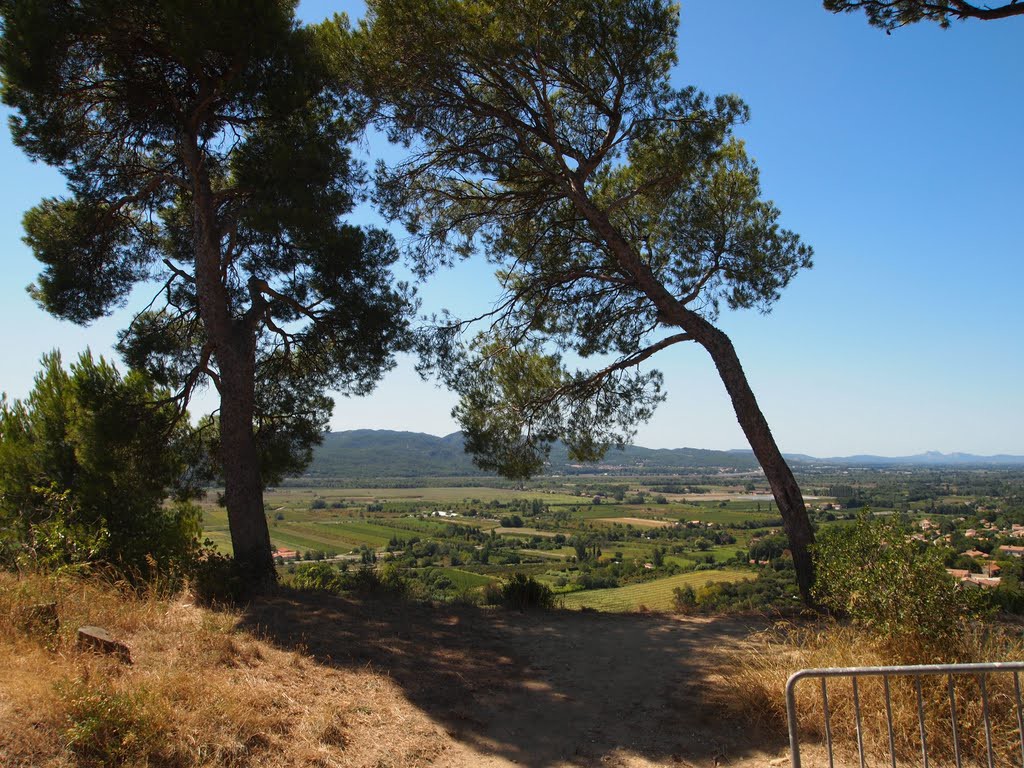 It is a wonderful spot to pause and take in the beauty of the area—even without a picnic!

Another popular destination—especially for kids on one of those really hot summer days—is a man-made lake, Étang de la Bonde.

If it is a chilly day—or you don’t have blankets and beach towels in the back of your car—I would suggest lunch at Saveurs Indochine. Located just north of la Patisserie—you could hold your breath and be there—this Chinese restaurant does a brisk à emporter (take-out) business as well as dine-in business. We ate there recently—we both ordered the 12.50 euro prix fixe menu—and had a marvelous lunch! The owner was delightfully friendly—he even showed us how to fold the napkins into little birds—and the food was very good. Did I say inexpensive, too?! 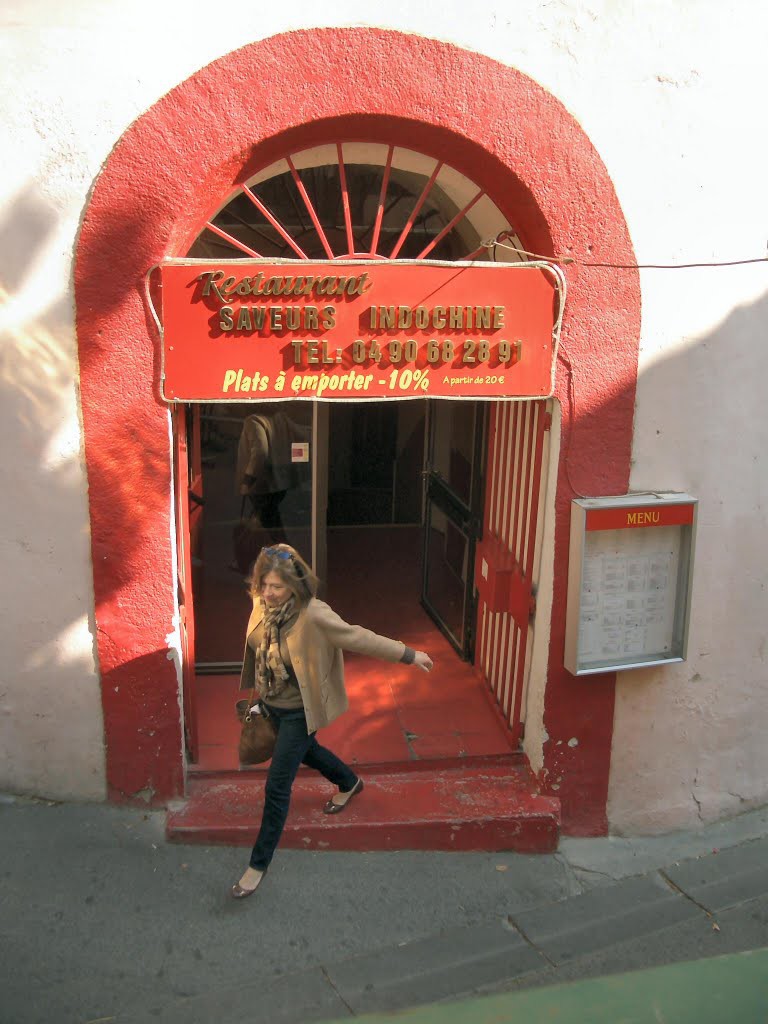 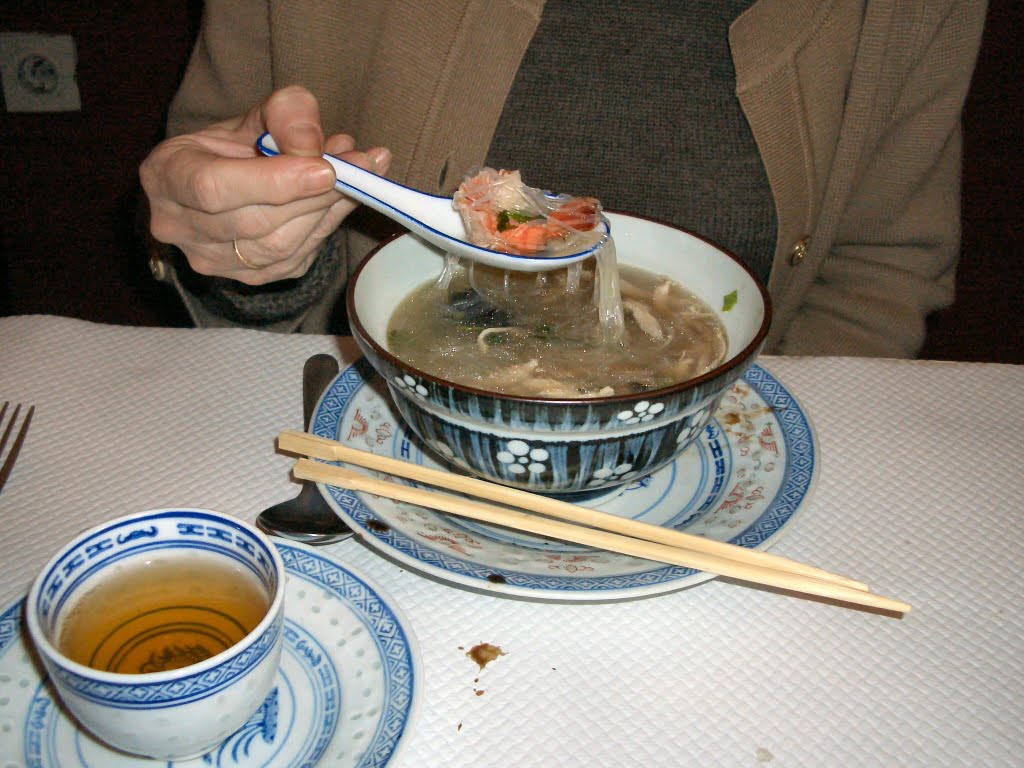 Or, you could visit the Musée de la Vannerie, just south of the center of town, on avenue Philippe de Girard. This is a basket museum, build where, in the late 18th century, a thriving wicker basket industry once stood. Using the branches of willow trees along the banks of the Durance River to make the baskets, Cadenet was famous for its basket weaving for many years. Now, most baskets hail from Northern Africa. 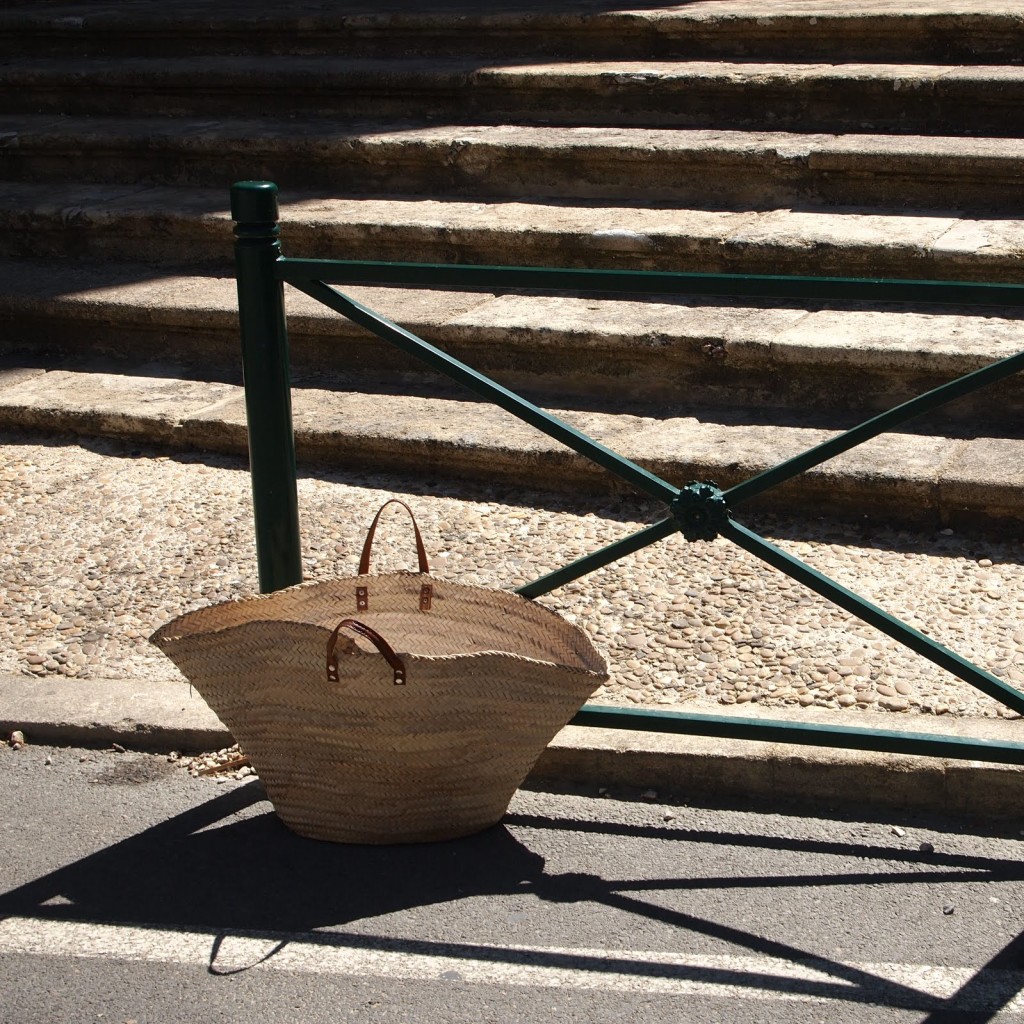 If an in-season vegetable or fruit eluded you at the market—or if you prefer organic— there is a wonderful bioligique produce store just south of town, on D943. We always stop here on the way into Lourmarin from the airport or TGV station.

On your way back to your car, stop at the church, Eglise St-Etienne (St. Stephen’s Church). Built between the 12 h and 16th centuries, atop the site of a chapel dating to the 7th century, the church is worth a stop. It is a peaceful place to rest after a morning at the Market. The lighting was striking. After our last visit to the church, I read that it has a 3rd century baptismal font with reliefs depicting a Bacchic orgy. The font is the subject of a disagreement among those who study these things: was it originally used as a sarcophagus or a bath tub? A reason to stop by again… 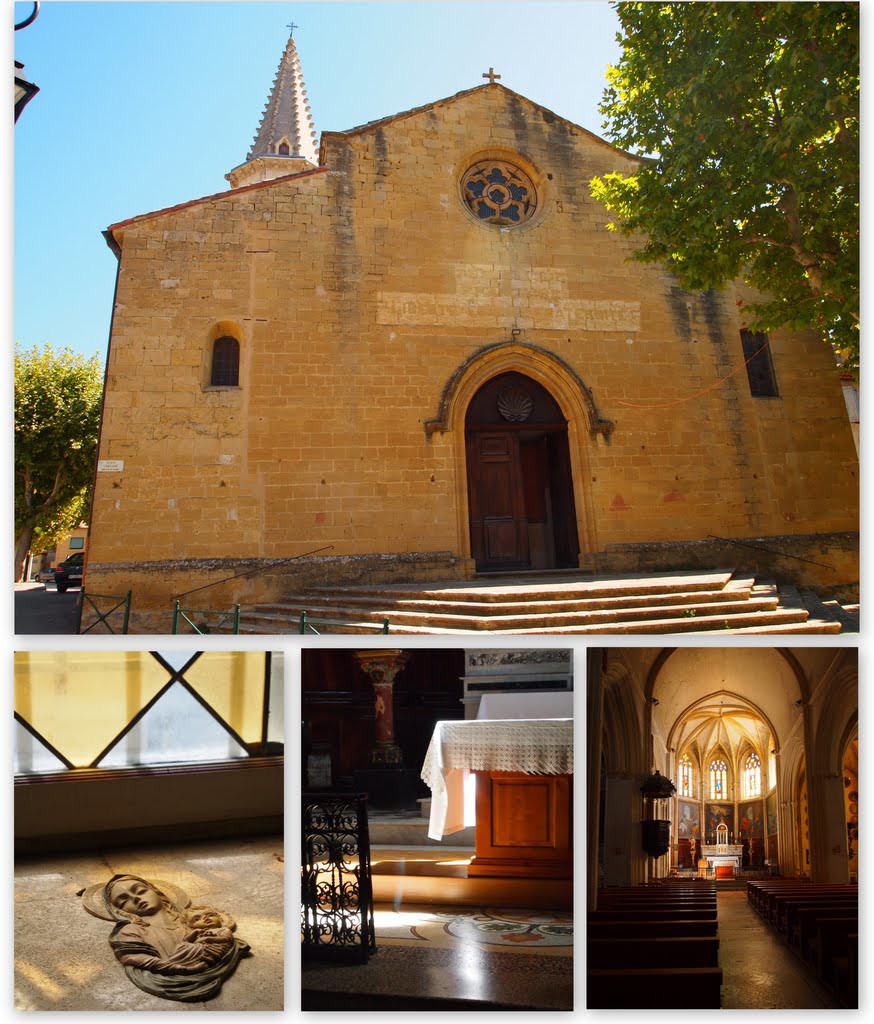 Nearby villages—those that are more likely to be on your tourist radar and some of our favorite places like Ansouis, Cucuron, Vaugines, Tour d’Aigues—might be interesting stops on a circuitous drive back to Lourmarin or wherever you are lucky enough to be staying. But, you may already have whiled away half the day in—gasp!—Cadenet. It may be time to start Monday night’s dinner…or at least time for an apéritif. Such is life in la belle Provence…. 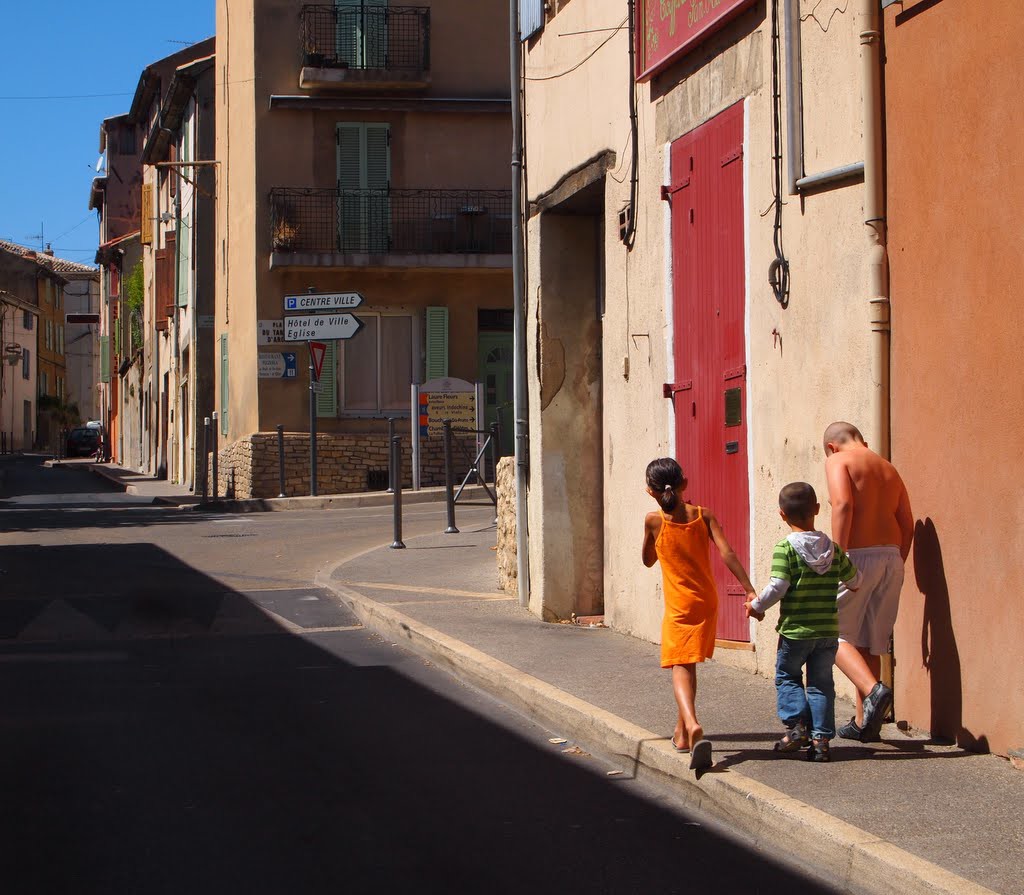