WHEN IN PROVENCE, DO AS THE ROMANS DID: ATTEND A PERFORMANCE IN ORANGE’S ROMAN THEATRE 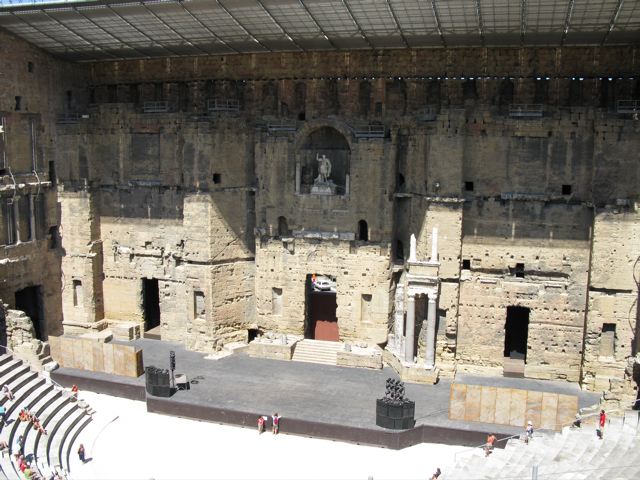 On June 17th, some 2,000 years after its construction, the Theatre Antique in Orange, will lift the curtain for its 142nd annual Les Chorégies d’Orange festival, the oldest festival in France.  If you are traveling in Provence, don’t miss the opportunity to attend one of the lyrical and musical performances in this extraordinary venue:  the performers world renown, the acoustics considered perfect, and the venue extraordinary.  You are guaranteed to be transported to another world.
If you know Provence, you know that the Romans, who hailed over the region from the 2nd century BC to 5th century AD, left much behind.  Besides its name–Provence comes from the Latin word, Provincia–the architectural ruins in Provence rival the “Roman ruins” in any other area of the world.  They are so ubiquitous that on an ordinary drive through the countryside near our apartment, one can see a perfectly intact Roman bridge, the remains of a Roman road, and several sets of pillars from Roman aqueducts that once graced the area.  (So ubiquitous are the aqueduct remains that we did not visit the famous Pont de Gard for many years because I harbored the ill-conceived idea that I’d already seen enough aqueducts and didn’t need to see another one…. Absolutely wrong, but more on that in another article.)
Orange is one of a dozen major cities in Provence that showcase the beautiful architectural remains of the Roman Empire. (Others at the top of the list would be Vaison-la-Romaine, St-Remy-de-Provence, Arles, Aix-en-Provence, Cavaillon, and Nîmes.)  Founded in 35BC on an earlier Celtic settlement, Orange was once the capital of a large section of Roman Provence and is said to have resembled a “miniature Rome” because the layout and buildings were so similar to those of Rome but for the reduced scale to match the smaller population.  Today, visitors can still see the Roman theater as well as the beautiful ornately decorated Triumphal Arch of Orange, a gateway to Roman Orange. Both are designated as UNESCO World Heritage sites.
Orange is about  80 kilometers (50 miles) from Lourmarin, where our apartment, La Bonbonnière, is located.  Enjoying dinner and a performance of Les Chorégies d’Orange and returning to Lourmarin the same night makes for a late night but is doable and well worth the effort.  It’s about an hour and a half drive and the roads are good.

The theatre is considered the best preserved Roman Theatre in all of Europe. Especially impressive is the stage wall. It was once richly decorated with intricate carvings and adorned with columns and statues, including a 12 foot tall Caesar Augustus which, until recently, graced the stage.  (If I recall correctly, it has been relocated to a safer environment.)  These adornments were apparently functional as well as decorative: they, along with the openings in the stage wall, helped to eliminate echoes to help enable the perfect acoustics.  At the top of the wall, visitors can see where a large awning (velum) would have been attached; the awning could have been stretched out over the audience to shelter them from inclement weather. 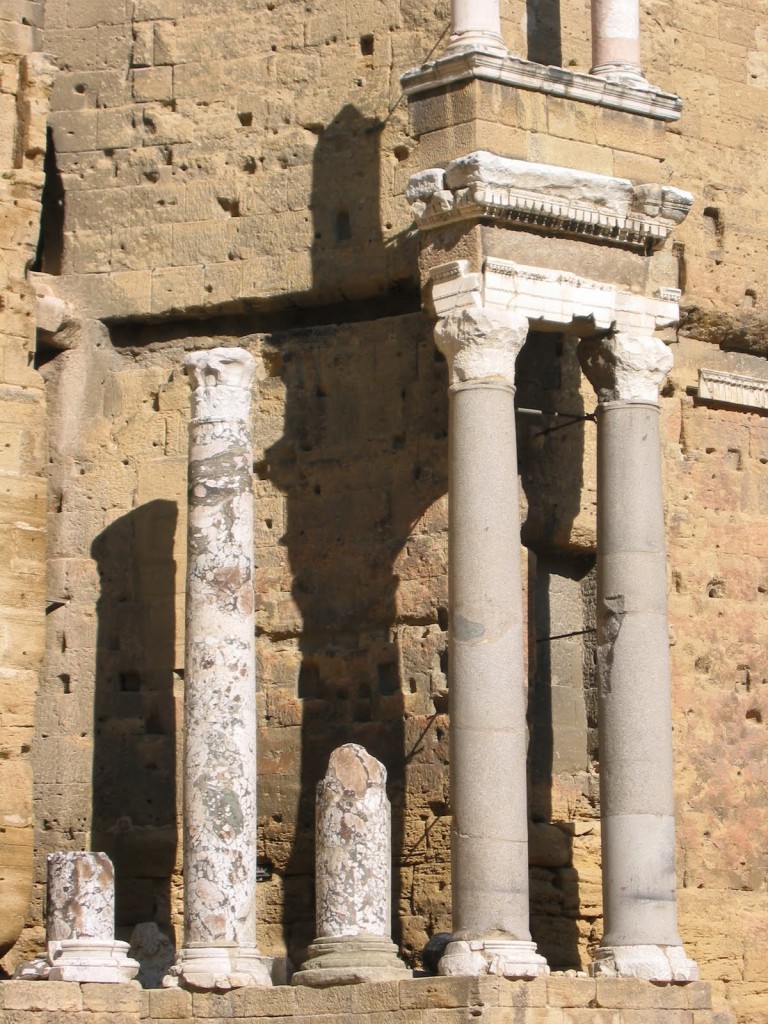 Two-storey towers (basilicae) frame the stage which is quite large (65 meters long and between 12 and 16 meters deep). It looks down upon the orchestra pit and out to the semi-circular area (cavea) of tiered seats, which are carved out of the hillside. 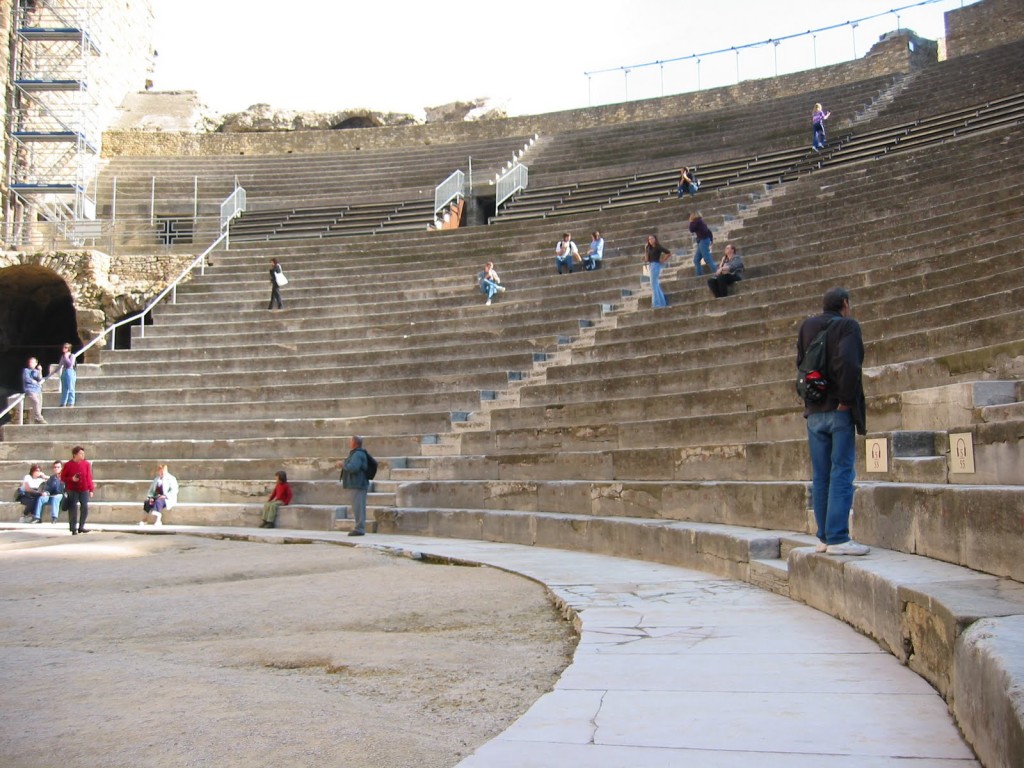 Upwards of 10,000 spectators would have filled those seats to watch dramatic performances as well as jugglers, mimes, pantomimes, and dancers.  Because the entertainment was, in part, designed to keep the common people happy and busy, entrance was free but seating was strictly designated according to social status in the community:  important people in the front and commoners high in the back. 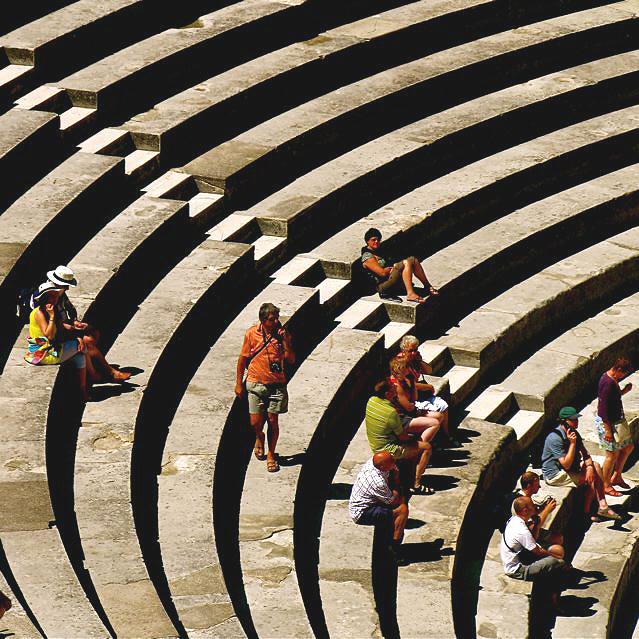 The theatre drew huge crowds until the Roman Empire began to decline.  In 391 AD,  at the behest of the Church, it was officially closed.  In the years that followed, it was pillaged by barbarians (400- 700 AD), used for defensive purposes in the Middle Ages, and for refuge during the Religious Wars in the 16th century.  In the 19th century, after 40 years of restoration work, it was resurrected.  In 1869, the first performance of what came to be known as a “Roman Festival” took place:  “Joseph,” an opera by Méhul inaugurated the theatre.  During the next four decades, a veritable who’s who in French classical theatre, including Sarah Bernhardt, graced the stage in Orange. 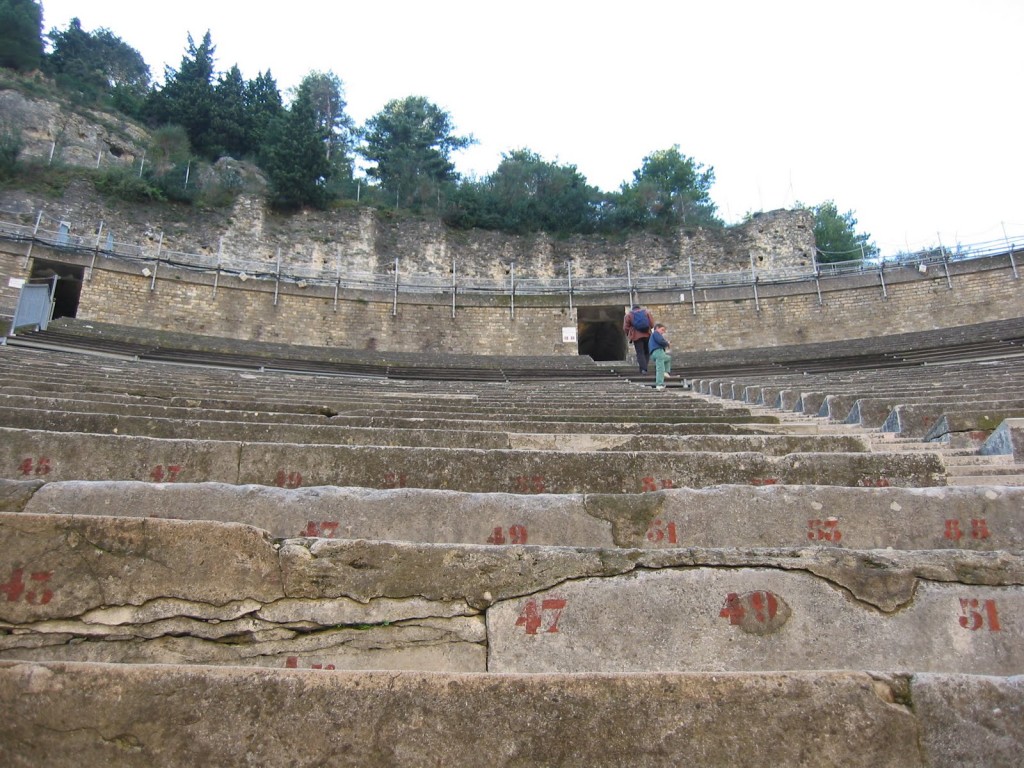 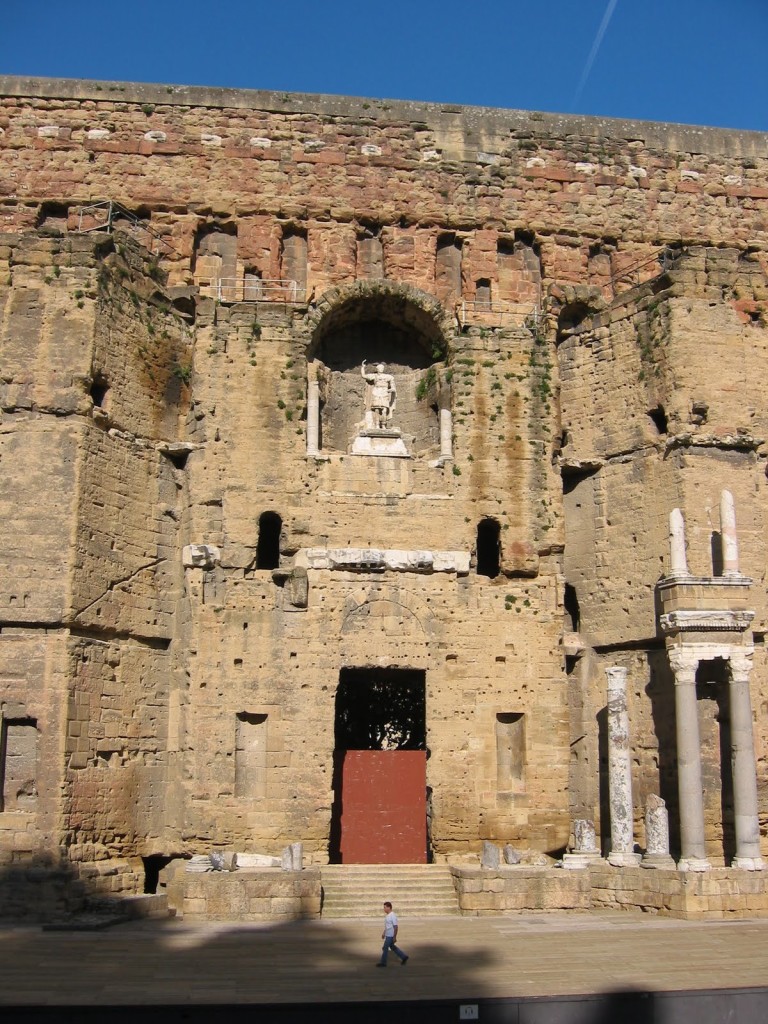 In 1902, the festival took its current name, Chorégies d’Orange, and has opened every summer since then.   In 1971, the festival was changed to focus on opera and symphonic works (and theatrical works were moved to Avignon).  The opera singers who have taken the stage in Orange are some of the best the world has to offer: Placido Domingo, Montserrat Caballe, Roberto Alagna, Rene Pape, and Inva Mula.  And when one experiences the acoustics and the fabulous surroundings, it is clear why such super stars are drawn to Orange. 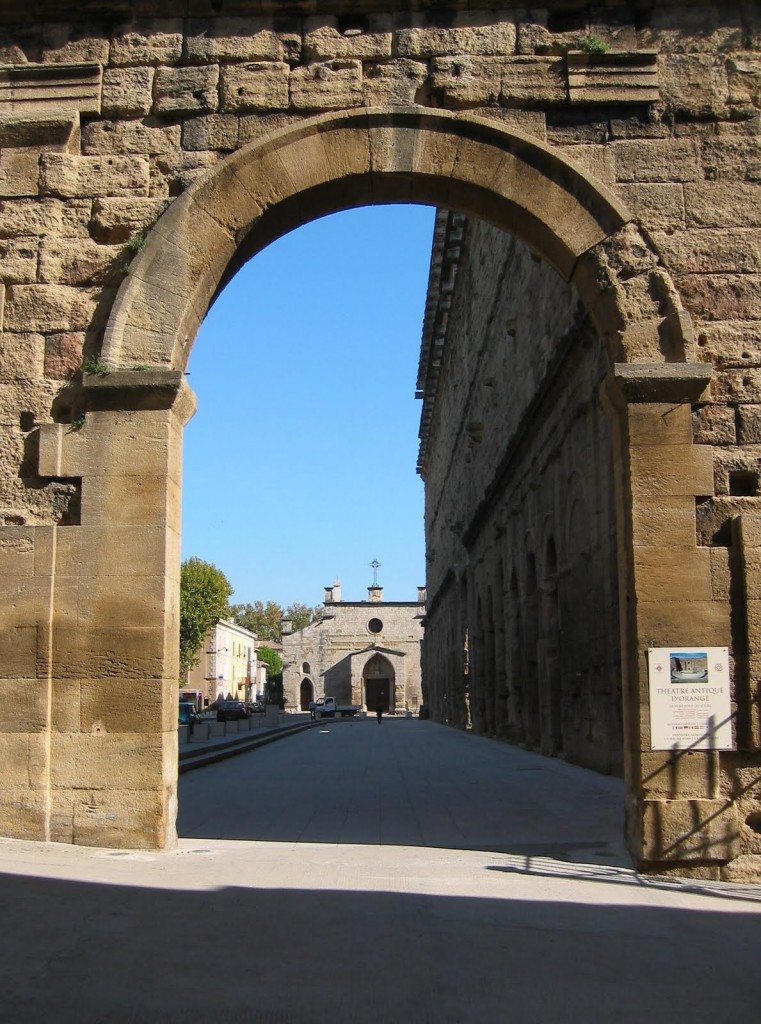 We attended the festival, some ten years ago, and heard a symphony with a guest pianist playing Beethoven.  I must confess that I can’t recall the orchestra, the pianist, or the program.  I only remember how extraordinary the experience was:  I recall reveling in the idea that we were sitting where the most elite Romans sat as they enjoyed performances on the same stage with the very same stage wall, some 2000 years earlier!  My husband loved the pristine sound in this acoustically perfect theatre.  My daughter nudged me and told me that she had just seen a falling star. Everyone was happy.

If you can’t make a performance, Orange is also an easy day trip and one that can be combined with an afternoon stop at Pont du Gard. I would recommend a brief stop at the Museum of Orange, where you can see pre-historic and Roman artifacts, including quite a few from the theatre.  (A single ticket to both venues can be purchased for a slightly reduced price.) Then, head across the street to the main attraction.   I would also highly recommend renting the headphones for an audio-guided tour of the theatre. Make sure to see the Triumphal Arch of Orange on your drive out.

Print
2011-06-17
Previous Post: EASTER ON THE CANAL DU MIDI
Next Post: 10 MARKETS IN PROVENCE: LITTLE CUCURON IS ONE OF OUR VERY FAVORITES!