LA TOUR-D’AIGUES’ MARKET: A SMALL MARKET WITH A BIG BACKDROP 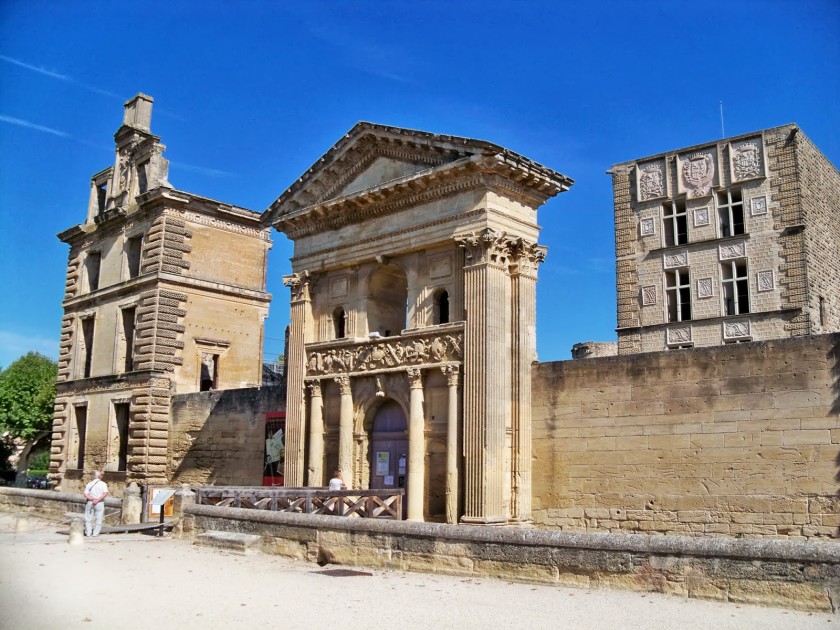 For a small market, La Tour-d’Aigues’ market certainly has a dramatic backdrop. Every Tuesday, the open square in front of the towering façade of the town’s 16th-century château is filled with vendors selling mostly food and practical wares.
Essentially, it’s a local market—when I was last there in June, most people seemed to be filling their baskets with fresh produce and other edible goodies. It’s a lovely spot to do just that.
La Tour-d’Aigues is located in the southeastern corner of the Luberon, about 15 kilometers from Lourmarin, where we usually stay. It was built on a hill, overlooking the fertile valley of the Eze River. With such a commanding view of the vast area between Aix-en-Provence and the Luberon, it’s not surprising that a fortified tower was built sometime around the turn of the 11th century. 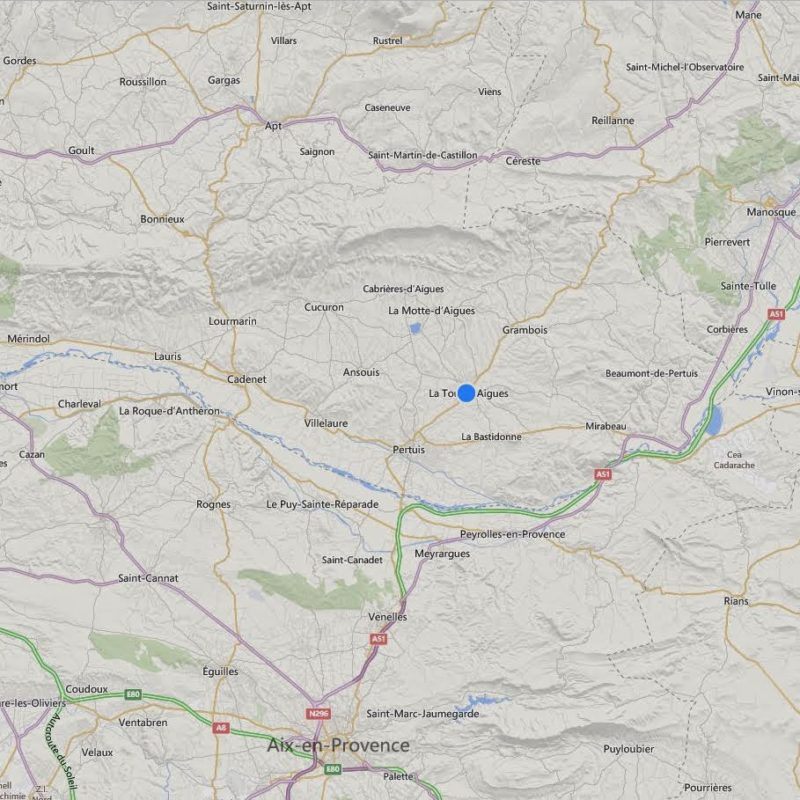 The village grew up around the tower and took its name from the “Turris,” as it was called in documents that date back to 1002, the earliest mention of the tower. This fortification was eventually abandoned sometime around the 14th century in favor of another one which was under the lordship of the Sabran family (who, until just a few years ago had continuously owned the château in Ansouis, about 7 kilometers away).
In the early 15th century, under the lordship of the Agoult family, a château was built on the edge of the cliff around the original dungeon, marked by a round tower at each corner, and a moat on three sides. Water for the moats was supplied through a large water project initiated by the Agoult family. Water was brought from the foothills of the Luberon to the moats, via two ponds, one of which—Étang de la Bonde—is a popular summer destination today.
In the 16th century, under the watchful eye of Baron Jean-Louis-Nicolas of the family Abacuses-Cental, the château was rebuilt in the Renaissance style by Italian architect, Ercole Nigra. At its completion in 1571, it was considered one of the finest examples of Renaissance architecture in all of Provence and it was apparently furnished lavishly enough for the likes of Catherine de Medici, who was a guest in 1579.
In the 17th century, the castle continued to be well cared for, even though its ownership changed hands several times. The Bruny family, who took ownership in 1719, was especially important in developing the gardens and filling their home with their collections of art. Excavated pieces of their glazed earthenware are on exhibit inside the pottery museum housed in the château today.
In 1780, an accidental fire ravaged the north wing of the property and before it could be rebuilt, the château was burned again, this time by angry villagers at the start of the Revolution. The fire raged for five days, leaving little more than the Renaissance façade that provides the backdrop to the market today and two 15th-century towers enveloped in a Renaissance-style veneer.
The château continued to deteriorate for over a hundred years until the General Council of the Vaucluse bought it in 1897. It took almost one hundred more years for the restoration work to begin. In 1985, it reopened to the public. Today, restoration efforts continue.
There are two museums housed in the château (the pottery one mentioned above and another about the history of the surrounding area, the Pays d’Aigues) and there are regular performances throughout the year, including a summer music festival. I am told that there is a “musical walk” around the stone wall of the château where your footsteps cause musical sounds to ring out.
My favorite part about visiting the market at Tour d’Aigues is strolling around beneath the château’s façade. The entrance has a beautiful triumphal arch said to be inspired by the Roman arch in Orange, about 100 kilometers away (about 60 miles). Every time I walk among the vendors, in the shadow of this imposing façade, I feel like I am on a movie set and that any moment Jean Dujardin, playing the role of Jean-Baptiste Jerome Bruny, will invite me in to see his French Renaissance garden, with its perfectly symmetrical beds and intersecting paths of gravel.  I’ll say yes, of course, and hope that I will  also see his maze and “grand canal.” How beautiful this garden must have been.
Back to the market….Don‘t look for gorgeous fabrics, linen dresses, silk scarves, or silver jewelry. (On Tuesdays, go to the market in Gordes for such fashionable wares.)
Do look for paella, Asian food, and a new artisanal product, coussins dorés, “golden pillows” stuffed with…
delicious fillings like ratatouille or spinach or chicken, onions, tomatoes, peppers, and chorizo. Plan to buy your produce here—it’s particularly fresh.

For a café crème, walk across the street to Café du Château–where we found our friend Emmi, studying the market and enjoying her view of what remains of a château that was once considered one of the finest examples of Renaissance architecture in Provence.

For lunch, friend Glen Kendall, head of the Provence branch of Calcutta Rescue and part-time resident of nearby Grambois, recommends the restaurant, Le Retro, which is very close to the market. “The menu varies from day to day but [it] is always excellent,” according to Kendall. “It’s owned by a local man who trained in Marseille,” he added.
If you are not ready to return from whence you came, there is the pretty Romanesque church, Notre-Dame de Romegas, known for having an apse at either end. Located at 5 Place de l’Eglise, it is southwest of the market (on the way back to Lourmarin).
Ice cream anyone? L’Art Glacier, an exceptionally good and award-winning ice cream parlor, is located just off D 135, on your way back to Lourmarin. Definitely worth a stop!
As many TMT readers know, the Cucuron market is my favorite Tuesday market but, occasionally, I’m up for visiting a different market. La Tour-d’Aigues’ market is a very nice alternative. Plan for lunch there, a visit to the château, and a stop at L’Art Glacier and that’s my kind of day!

To read about other markets I have covered, click here.

Print
2014-07-27
Previous Post: 24 HOURS AT ALAIN DUCASSE‘S HOSTELLERIE DE L’ABBAYE DE LA CELLE—I ONLY WISH WE COULD HAVE STAYED LONGER
Next Post: LOU PÉBRE D’AÏ IS A GREAT REASON TO MAKE A DETOUR TO LAURIS