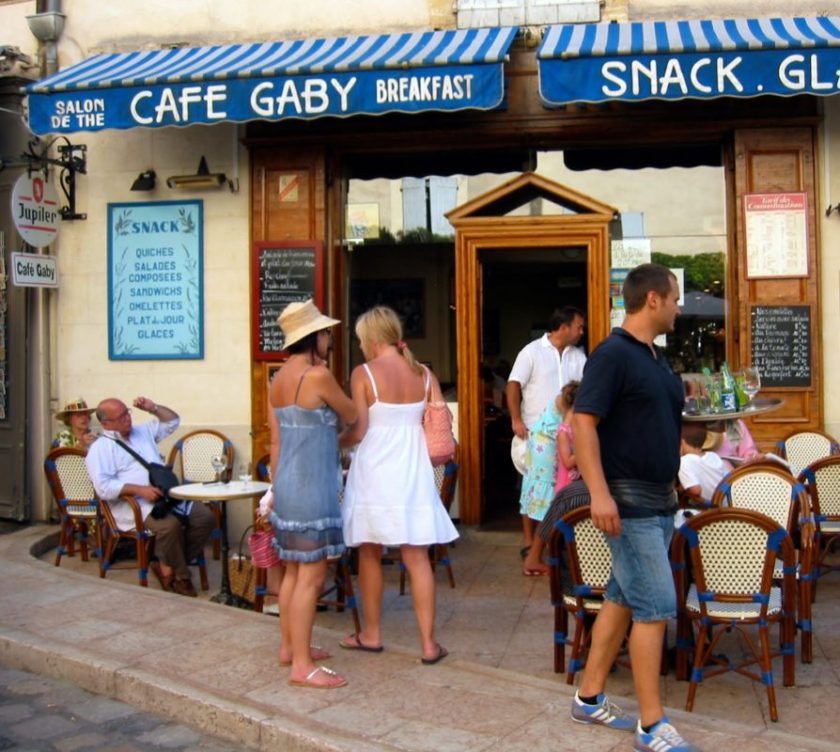 Ahhhh, Pastis….The sweet scent of anise wafts from the tall heavy-bottomed glasses on our tiny table in Café Gaby.  Memories of a subtle licorice flavor laced with fragrant herbs are called forth.  Our thirsts on this very warm late August day will soon be quenched.

We arrived in Lourmarin yesterday afternoon and are now sitting in our favorite café, in the heart of this Luberon village, where we will mark the start of our vacation with—what else? —a little pastis.  We sit, nestled among locals and tourists,  in this lively café where people have come for generations for their pastis.

“Since the war,” the waiter replied when we asked how long Gaby has been here  (and he meant WWI).Our waiter has poured a couple of inches of the golden-colored liquid and it beckons us.  When pastis is served with all its accoutrements, one would also be served a ceramic pitcher of ice-cold water, a small bowl of ice-cubes, a saucer of sugar cubes, and, to the uninitiated, a curious perforated flat spoon.  Here, at Gaby’s, things are casual—we just got the pastis and a carafe of water.  No fanfare.  Just drink up.
I prefer my pastis without sugar anyway, but I do typically like to add the ice-cubes at the end of this ritualized preparation.  I usually pour about three-parts water for one part pastis; but other fans recommend four parts and even more.  Towny likes a little sugar; so, if we were in La Bonbonnière, he would balance the ornate spoon atop the glass, place a cube on the spoon, and pour the water over it.
Once the water is added, the pastis turns cloudy, reminding one of a long-forgotten Chem 101 experiment.  And, with the first sip, we are officially in Provence. 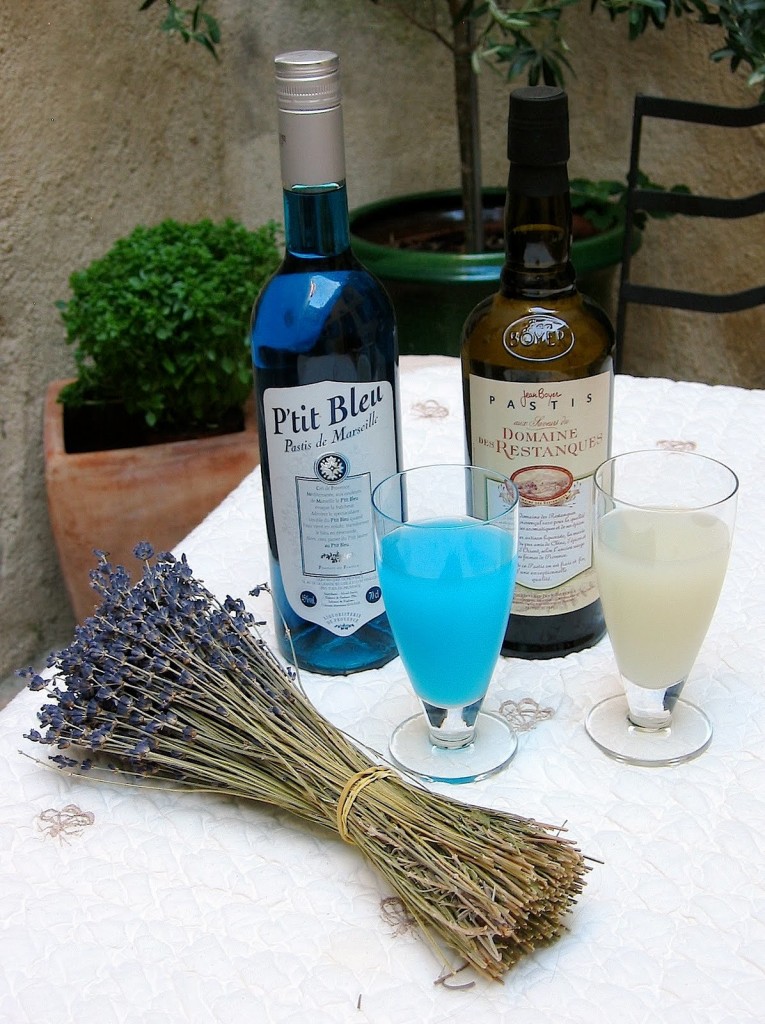 Pastis is an aperitif made primarily from anise.  Each producer has his or her own proprietary combination of ingredients, but other additions usually include licorice root, fennel, and as many as 70 different Provençal herbs and spices such as sage, hyssop, and melissa.  Its name may come from the old Provençal word, pastisson, which means “combination of.”  Think a veritable “pastiche” of herbs. This explanation is likely to be true since pastis hails from Marseille.  It was there, in the 1920s, that Paul Ricard began experimenting with anise-flavored concoctions in an effort the fill the void left after the French government had banned its infamous parent, Absinthe.   Ricard’s initial experiments produced drinks too high in alcohol to please a nervous French government, but, by 1932, he was in business and the first pastis was commercially produced.
The provenance of absinthe is interesting and warrants a brief detour here although, like the history of the Caesar salad, it may be more apocryphal than true.  Its origins can be traced back to the late 18th century in the mountains of Switzerland when a man with the ironic name of Pierre Ordinaire created an alcohol-based medicinal drink of a several herbs, including anise and the notorious wormwood, artemisia absinthium.  It was said to be a remedy for an amazingly large number of ailments ranging from rheumatism to, not surprisingly, intestinal worms.

The drink went commercial when Henri-Louis Pernod received the recipe from his father-in-law and, in 1805, opened a distillery in France, near the Swiss border.  The drink had a small but loyal following in its native Switzerland, the Netherlands and its new home, France.  Its wildly intoxicating effects certainly contributed to its growing popularity–not to mention its nickname la fée verte (the green fairy)—although it was not until the 1860 or so that its popularity really began to take-off.  This sudden rise in consumption coincides with the near standstill of French wine production at due to the devastating bug, phylloxera, that infested and destroyed the majority of French vineyards.

By 1890, absinthe was fantastically popular. It was inadvertently promoted by artists and writers like van Gogh, Gauguin, Picasso, Toulouse-Lautrec, Hemmingway and the like who filled the Parisian cafes and drank the stuff.  And, it wasn’t long before more ordinary men and women—those who enjoyed the paintings and read the books—were drinking the same drink.  That its consumption was so bourgeois can be seen in paintings of that time; but it was not long before its dark side was also recognized and realized in the artwork of other artists, most notably Daumier and Manet. 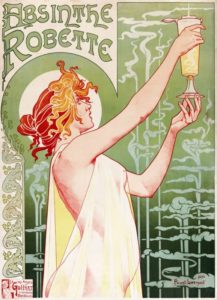 In 1915, absinthe was outlawed in France.  It is said that it seemed the entire country of France was addicted to the stuff, thus providing the anti-alcohol movement fuel for its prohibition fire but also providing the wine-makers of France a bandwagon to join because an absinthe ban might enable them to regain the market it had lost to absinthe’s popularity.  (Other European countries and the United States had banned the drink three years earlier.)

Wormwood was thought to be the source of the degenerative powers associated with absinthe; but they were, in all likelihood, due to the high alcohol content of absinthe—as high as 170 proof.  Wormwood does contain the chemical, thujone, that, in high doses may have hallucinogenic effects; but recent chemical analyses of the absinthes of that time have revealed that the amounts present were too low to have had such effects. If the culprit was not wormwood or alcohol, it may have been the chemicals added by some of the distillers who made absinthe on the cheap.

This was the climate into which pastis was born.  Around the same time that Ricard introduced pastis, Pernod—the first producer of absinthe–introduced its own version of an anise-flavored drink with a lowered alcohol content and no wormwood. Although the latter is, by definition “pastis,” Pernod refused to call it anything other than Pernod.  Even though Pernod and Ricard merged into one production house in 1974, Pernod is still Pernod and pastis is pastis.

Our favorite pastis is one made by Henri Bardouin, but the most widely served pastis is undoubtedly simply known as “51.”  Nowadays, there are a large number of small artisanal producers that put out terrific pastis and, in fact, this article may inspire a little pastis tasting later in the week.  Pastis can even be found in blue now, P’tit Bleu, and it is quite good (although the color still throws me).

Our favorite way to drink pastis is on the simple side.  Other people like to gussy it up with other alcohols like whisky and gin, or syrups, champagne and even chocolate cookie crumbs.

If it is served with anything, it is usually simple fare like small bowls of olives or nuts or toasts with tapenade.  And cooking with pastis….well, don’t get me started on my mussels with shallots and pastis.

I hope this article inspires you to pick up some pastis before the warm summer evenings fade into fall.  And, maybe some absinthe, too—it has been legal again in the States and in Europe for twenty or so years although just in the last few years has there been a resurgence of interest in the drink.

Does it have the notorious wormwood?  I can’t seem to find a definitive answer—some sources claim that there is none and others report that there is a small amount.   Je ne c’est pas. But, I end this piece with a story that may shed some light on the subject (or, at least, pique your curiosity!).

“Funny you should mention absinthe,” my hair stylist, Paul, at TIPS in Boston, said to me just last month.  He then told me about recently finding a small bottle I had given him several years ago.  He had forgotten the instructions I had given him to prepare it—with water!  So, he just poured a glass—straight up!  His first impression was, “this stuff is awful” and he promptly re-inserted the cork and jettisoned the bottle into his garbage.  Then, he said, “it” hit him and it was a strangest intoxication he had ever had.  The next thing he knew, he was fishing threw the garbage for more.   (And he asked me to bring a bottle back to him).  Maybe the fairy’s wings have not been clipped.