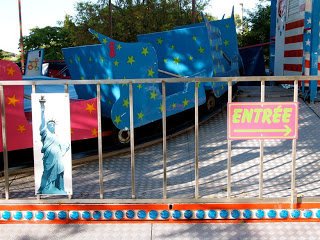 The annual Fête Votive rolled into Lourmarin last week, completely consuming this tiny Luberon village, as it does every year on the last weekend in August. Unfortunately, the mistral blew into town around the same time; but nothing could dampen the palpable excitement that fills the hearts of the inhabitants of Lourmarin and their guests during this festival.

Every village in Provence has a fête votive, each slated for a particular weekend every year. These fêtes or festivals probably had their origin in the Catholic practice of honoring the patron saint of the village, but are now clearly more secular than religious. “Votive” refers to the fulfillment of a vow which, in this case, would be to remain dedicated and grateful to the saint(s) who protectively watch over the respective village. No one with whom we spoke, however, was the least bit familiar with the religious aspect of Lourmarin’s fête votive. It really had much more to do with having a party, they said. And, to that end, Lourmarin was…

tremendously successful.  The festivities actually commenced the night before the four-day even began. While the wonderland of games and amusement rides stood patiently, the locals attended a pot luck dinner on the main drag of the village, complete with a full bar—the pastis was flowing—and a live band.  The next afternoon, the tiny midway came alive with bright lights, music, laughter, and screams of delight, and the fête officially opened. An orchestra took the stage in the evening and dancing in the street followed. 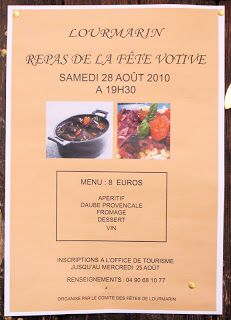 On Saturday evening, Le Repas de La Fête Votive takes place. This is a huge dinner, served family style. This year the menu consisted of an apéritif, daube Provençal and coquillettes, fromage, and dessert—all for eight euros!!!! And, bien sûr, the wine was included! Another band takes the stage later on. On Sunday, the band plays again. Apéritifs are served on Monday evening and another band takes the stage that evening.

Sports play an integral role in the activities as well. Over the weekend, villagers gather for the tournoi de foot in which various groups in town—the Tennis Club, Pizzeria Nonni, Café L’Ormeau, and the like—field teams that play short matches of football on soccer field that dominates the town. Some teams take this event more seriously than others and we saw some footwork that rivaled that that was demonstrated by the French National team in South Africa this summer. Other teams get wrapped up in the liberal consumption of alcohol that encourages all sorts of mischief and downright silliness. One year, one of the teams showed up on the field—after a long lunch that included a lot of rosé—dawned in wigs and a wild attire that is still talked about. This year, our daughter got to play on the Café Gaby team.

Both boules and petànques tournaments take place, attracting many teams from around the Luberon every year and a respectable crowd as well. This year, with a relatively new and larger Boulodrome, the events seemed to attract even more people than we had seen in years past. 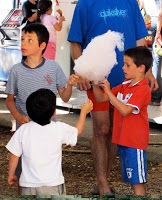 The fête is really quite small and, from an American standpoint, refreshingly devoid of commercialism. Beyond some crepes, Barbe à Papa that elevates cotton candy to something gourmet, a fried dough called ChiChi, and a bar of pastis, wine, champagne, and beer, there is very little for sale. It is just the right size for fun and a lot of socializing. Just like Friday’s market, it is wonderful catalyst for bringing the whole village together–all ages, all classes.

On Thursday evening, we exchanged a few words with the mayor who was helping to set the stage up. He told us that he loved this time of year, when the fête comes to town, a sentiment shared by nearly all villagers with whom we spoke.

The Fête Votive typically culminates with a fabulous display of feu d’artifice with the Lourmarin Château as the backdrop. This year, the mistral had other plans—the temperature plummeted to 62  F/16 C (not counting the wind chill, a factor I normally confine to conversations about New England weather!) and cold winds ripped through the village that Monday night, forcing the fireworks to be canceled. But, the parade marched through the village, the band played on, and the crowd rocked. It was indeed a successful fête.