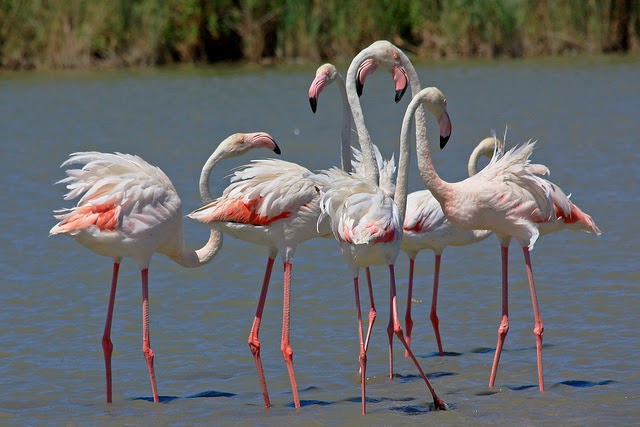 When you’ve tired of charming hilltop villages in the Luberon and swanky restaurants along the French Riviera, don your jeans and cowboy boots and head to the Camargue. (Forgot your boots? Pas de problème. You can pick up a pair in Saintes-Maries-de-la-Mer.)
Although I quickly grow bored with swank, I have to confess I am rarely tired of charm, especially in the Luberon—I just wanted to grab your attention to promote the Camargue, an area so radically different from the rest of Provence that you’d think you’d crossed the border into another country. If there are children in your group, they will love you for the change of pace! 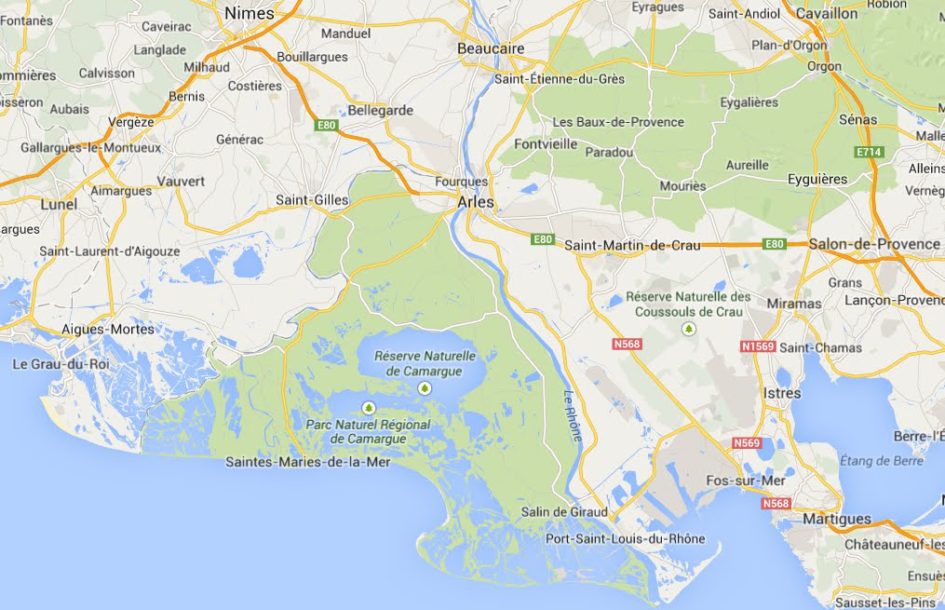 The Camargue is a little over 500 square miles (140,000 hectares) of fabulous wilderness wedged between Arles and the Mediterranean Sea where the Bouche-du-Rhone département   meets the Gard département in the neighboring region of Languedoc-Roussillon. Created over the centuries by the sediment from the Rhone River, one third of it is composed of water: seasonal marshes, lagoons, and salty plains. The northern part is a major rice producing area and the delta is a major salt producing area. Much of the rest of the Camargue (around 350 square miles or 85,000 hectares) is protected as a nature conservation area called the Parc Naturel Regional de Camargue.
Commercial activity is severely limited by law, thereby protecting the black bulls, wild boars, white Camargue horses, pink flamingos and over 400 species of other birds as well as the extraordinary variety of flora. 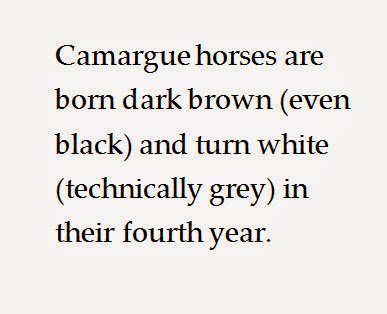 Although we have only seen bulls in the arena in Aigues-Mortes, a medieval fortified town in the south west corner of the Petite Camargue, we have, on one trip or another, seen everything else, including an occasional gardian, otherwise known as a Carmargue cowboy! It’s often called the “Wild West of Provence” or La Camargue Sauvage.

The Camargue is especially inviting in the spring after the cold mistral winds have died down and before the summer’s notorious mosquitoes have descended. The flora is beginning to bloom and the wildlife is re-emerging. In the case of the flamingos, they return from warmer climates right about now to nest. The Camargue is one of the only places in the Mediterranean where they build their nests. To see a flock of flamingos—milling about in the reed—that suddenly takes flight like a huge pink plume is a sight not soon forgotten. Upwards of over 10,000 pink flamingos are there in the spring and summer seasons.

The geography of the Camargue—a huge alluvial plane of unstable land at the mercy of the Rhône River, the Mediterranean Sea, and the strong winds—has never encouraged human habitation although apparently salt was mined in the Neolithic period (going back at least to 2500 BC). Some 2500 to 3000 years ago, the Ligurians and Greeks were interested in the plentiful fish in the delta and the rich source of salt in the marshes. Later, the Romans planted vines and wheat (and continued the development of salt production). In the Middle Ages, the Benedictines and Cistercians, followed by the Knights Templars, settled in the area and focused on salt production. In the 16th century, cattle and horse gardians moved in and, in the 19th century when dikes were built on the river, farming was further encouraged and salt production was industrialized. The rice industry grew in the mid-20th century, initially as a means to desalinate the soil. (Interestingly, after World War II, agriculturists working under the auspices of the Marshall Plan are credited with transforming rice cultivation into an industry.  Also, Paul Ricard, most well-known for his pastis company, was instrumental in developing the rice industry and, today, 25% of his estate, now owned by his daughter, is still devoted to growing rice.)

Today, the Camargue relies on tourism—over one million visitors a year—as well as salt and rice as its primary industries. Tourists are drawn to the outdoor activities—hiking, biking, horse-back riding, bird watching, and sunbathing. Over 800,000 tons of salt is produced each year, for consumption as well as for industrial purposes.  Camargue red rice (riz rouge) is one of about 40 rice varieties grown in the area but it is the most famous and sought-after of the different rices; it is short-grained, unmilled, somewhat sticky and chewy, and tastes nutty.
The three major cities are Aigues-Mortes, Arles, and Saintes-Maries-de-la-Mer, each of which has much to offer visitors. To me, Arles brings to mind a rich collection of Roman ruins, Saintes-Maries its famous Gypsy Pilgrimage in May, and Aigues-Mortes its walled-in city (although there is much more to do in each city, particularly in Arles).
The salt industry is a huge draw for many tourists, including me. There are two main salt production areas in the Camargue: in the southeast corner, near Salin-de-Giraud and the Grand Rhône, lies the salt marshes (salins) of Salin de Giraud and, in the southwest corner, near Aigues-Mortes and the Petit Rhône, lies the Salins du Midi.
Next week, we will dip into the Gard département in the neighboring region of Languedoc-Roussillon to visit the Camargue’s second largest city Aigues-Mortes (which translates to “Dead Waters”) and its nearby salins (where salt-aholics can get their fix!).  Train tours of the salt marshes just resumed on March 3rd!
Places to consider stopping:
Parc Ornithologique du Pont de Gaubsite:  This is a great way to see bird life–on some 150 acres of marsh.  It is also a bird hospital.
Musée Camarguais:  Located in a former cattle and sheep ranch, its cultural exhibits give one the feel of what life was like 100 years ago and its geological and historic exhibits  provide information about how the Carmargue has changed across time.  Nature trails, too.  The museum just reopened in November 2013.

Domaine de la Palissade:  This is the only area of the delta that has never been enclosed by dikes; there is beautiful scenery reflecting what the lower Camargue originally looked like.  It includes a  bird refuge, nature trails, and picnic tables.

Les Cabanes deCacharel: Horses for hire; tours on horseback; and pony rides for those who don’t ride.

Le Vélo Saintois:  Bicycle rentals for all ages; bicycles can be delivered to hotels.

Tiki III:  See the Camargue from a paddle steamer!

Always confirm information, such as that given above, because there may be changes of which writers like me are unaware.

There are lots of “safari” tours in 4×4 vehicles, including those devoted to photography.  We have not done this, but it sounds like a good idea!

Camargue boasts 75 km (45 miles) of fine sandy beaches.  I am not familiar enough with the beaches to make recommendations but the two that were most often recommended to us are Plage de  Beauduc (beautiful sandy beach, 7 km long) and Plage de Piémançon, (also known as Plage d’Arles; flora covered dunes and beautiful sandy beach, 6 km. long; known for its sea kayaking and naturist/nudist bathing; free; caveat of lots of camping vehicles and very minimal services).  For more information, see http://www.camargue-en-provence.com/plages-camargue-tourisme-a.html.

Bring binoculars (and, as always, your camera).

In the summer, pack sunscreen and insect repellant.

Secure the car and don’t leave valuables in it.  (Good advice for anywhere!)

If driving from Martigues (or from  Marseille, Aix-en-Provence, etc.), you can cross the Grand Rhône with the Bac de Barcarin ferry from Port Saint-Louis-du-Rhone to Salin de Giraud.  The cost is something like five euros, cash only.  It runs about every 15 minutes. The Camargue is just over an hour’s drive from Martigues.