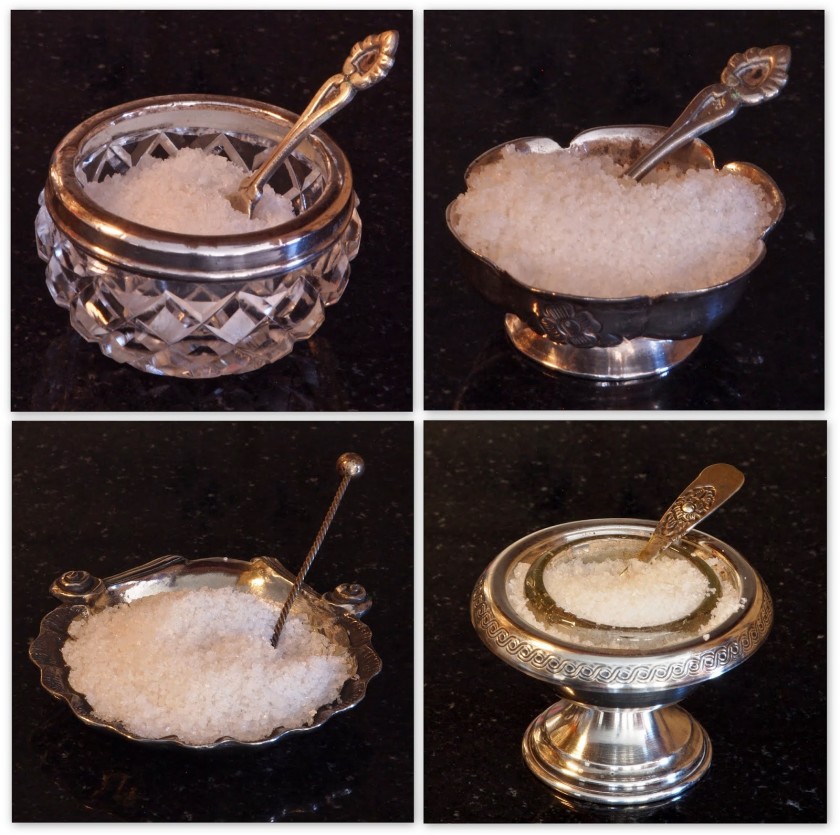 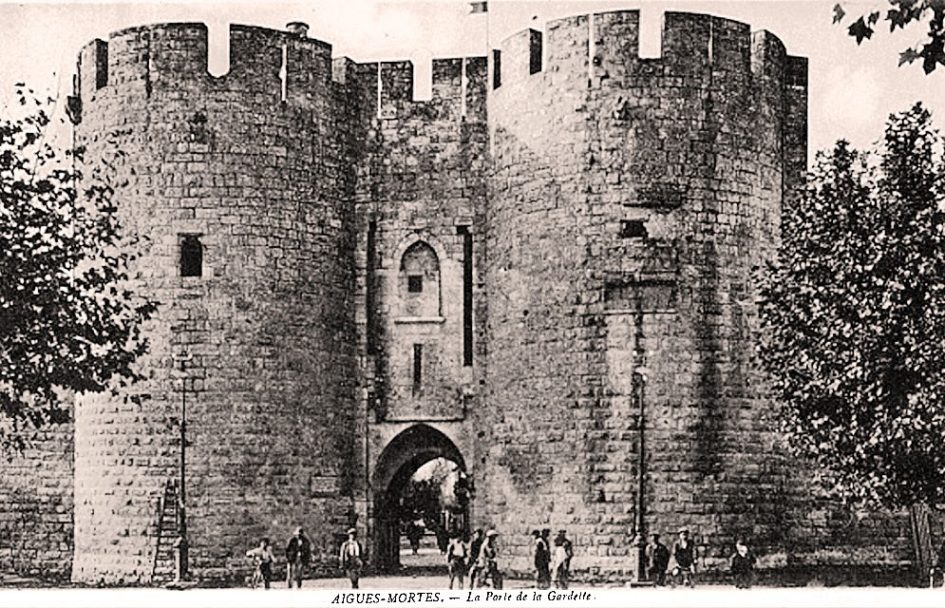 Porte de la Gardette, the main gate, is a good way to enter as it is near the Office of Tourism and will place you on rue Jean Jaures, where you can head straight for Place Saint Louis. There, King Louis IX is immortalized as a lovely statue (1849) overlooking the place which, today, is surrounded by cafes.
The Eglise Notre-Dame-des-Sablons (Lady of the Sands) is adjacent to Place Saint Louis. This is the oldest building in Aigues-Mortes—the original church dates back to 1183. King Louis IX and the other crusaders were blessed here before departing for the Seventh Crusade in 1248. Its roof collapsed in 1634; it was reconstructed in 1711; and beginning in 1991, 31 contemporary stained-glass windows were installed. 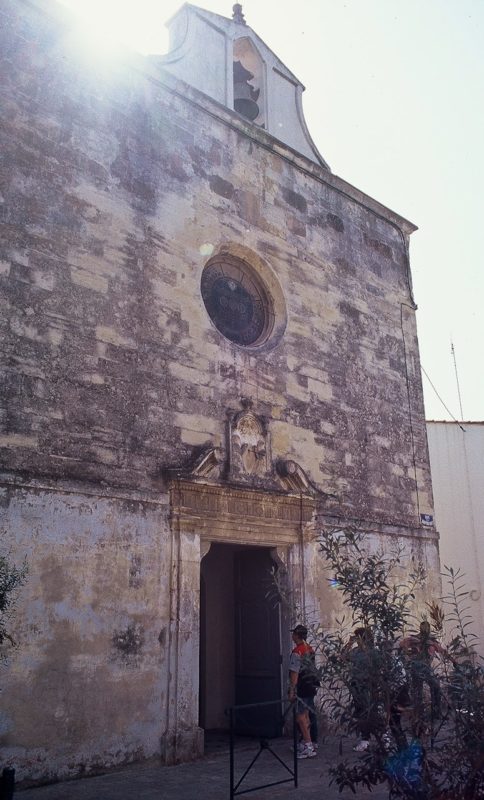 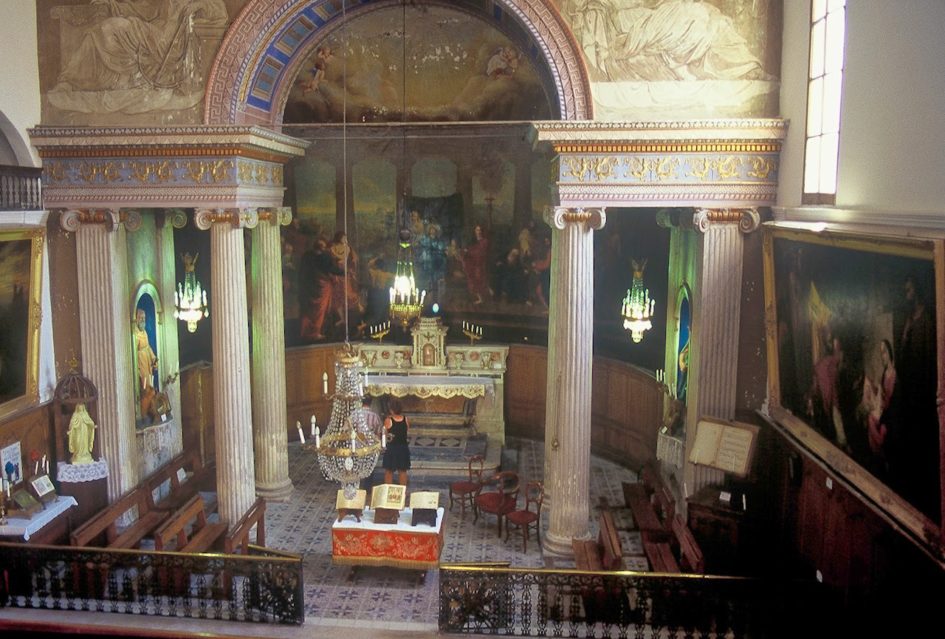 Take some time to stroll along the cobblestone streets of Aigues-Mortes. Yes, this city has more than its fair share of tacky stores, but interspersed are galleries and specialty food stores where you can find “Fleur de Sel de Camargue” (and related accouterments from which to serve salt, grind salt, and shake salt), riz rouge, Vin des Sables (wine of the sands), and local delicacies like saucisson de taureau (yep, bull sausage) and “Fougasse d’Aigues-Mortes,” a sweet, buttery brioche with sugar and orange flower water (that might be a more broadly appealing local treat than the bull sausage). With salt being so prevalent, bakeries feature cookies and candies sprinkled with salt from the Camargue.
The ramparts–including the Tour des Bourguignons, Tour du Sel, and Porte de l’Organeau—and the massive Tour de Constance are must-sees. You can choose whether to do this on your own with a guidebook or with a self-guided audio tour, or with a tour guide. Note that there are ten gates in the ramparts, only two of which are on the north side and five on the south side, facing the sea—do you know why? The Tour de Constance, considered a “Masterpiece of Gothic Rationalism,” is, I can attest, a wondrous feat….how did the engineer incorporate all that stuff—stairways, fireplaces, a chapel, an elaborate defense system and more—in a 40 meter/13 foot high circular tower that is 22 meters/72 feet wide with walls 6 meters/20 feet thick? What are all those openings in those thick walls of the tower for?
The view from atop the ramparts or from the watch tower of the Tour de Constance is breath-taking. On the south ramparts, looking out toward the Mediterranean, the sea salt comes wafting toward you and reminds you that Aigues-Mortes stands here because it was France’s link to the sea. In the other directions, you can see salt, one of the primary reasons Aigues-Mortes still stands here and one of the main draws for David (although knowing Mark’s interest in the history of food, I know he would like this tour, too!).
To get a close-up look at Camargue’s salt industry—and for a fun afternoon, head over to Salin d’Aigues-Mortes (also referred to as Salins du Midi), just outside the walls on the west side (see map below). There, as of the first week in March, you can board a train for an hour-and-a-half tour of the salt marshes, a surface area likened to that of Paris, about 10,000 hectares (38 square miles). About 340 km (211 mi) of roads and paths meander and crisscross throughout this area. 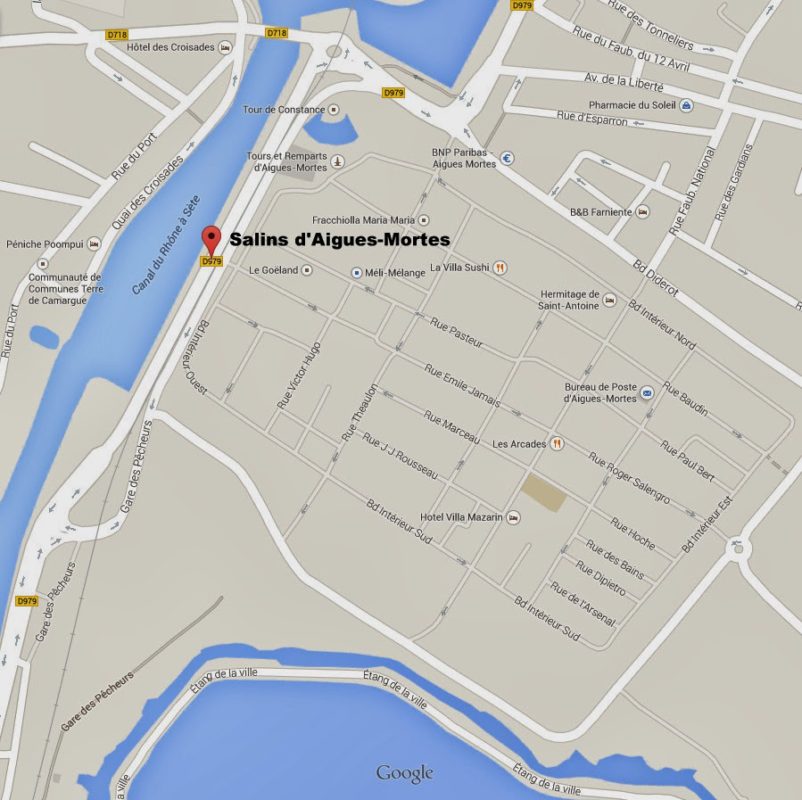 In an average year, about 500,000 tons of salt are produced here—half of France’s salt supply comes from here. All of the salt produced here, according to someone I spoke with at Salin d’Aigues-Mortes, is for the table and not the road. (On the other side of the Camargue, in the southeast corner near Salin-de-Giraud, lies another major center for salt production that provides salt for industrial purposes, like melting ice on the roads!).
La Baleine (common) table salt (the blue cylindrical container with the big whale emblazed on it) comes from here as does Fleur de Sel de Camargue, the hand-harvested tasty, coarse flakes that melt in your mouth and command a pretty price.
A picture speaks a thousand words—and my mother is always telling me that people don’t want to read so much—so I encourage you to watch this video below to get an idea of what you would see on the tour. Tours in 4×4 vehicles begin in mid-April and offer a more in-depth visit of the salt marshes.
For those especially interested in the Fleur de Sel harvest, I recommend another 4×4 vehicle tour of that harvest (from mid-July to August). This is also the time of year when the marshes turn pink (due to the high concentration of red marine phytoplankton (microalgae). In the meantime, see the video below showing the Fleur de Sel harvest. (It is in French, but all you need are the images!)
There is also a salt museum where one can find further information about the stages of salt production and its history in the Camargue. There is also a small store, mais oui, where salt and various accouterments may be purchased (great gifts for family and friends!).
According to my source from Salins d’Aigues-Mortes, about 90,000 people visited the salins last year. Even if you are not a foodie, you are undoubtedly aware of the world-wide interest in salt as a specific culinary product. Salins d’Aigues-Mortes is trying to ride this wave and has begun a campaign to attract even more visitors.
I confess I have not taken these tours, but they are on my list…especially after doing the research for this article. We have seen the salt marshes and, as I wrote in the earlier post, a huge swath of the gorgeous Camargue.
After so much reading about salt, you might find that you have a hankering for something on the salty side. I suggest you check out David’s Cocoa & Lavender post (about his salt addiction)…It features a recipe for Mark’s mother’s Salted Oatmeal Cookies. Now, which salt will you use?

For more information, visit the Aigues-Mortes Office of Tourism website: www.ot-aiguesmortes.fr/en
“Aigues-Mortes, Un Port Pour les Croisades” (“Aigues-Mortes–A Port for The Crusades”) is a film about the history of Aigues-Mortes, created to help educate people about their visit to this city. It  was released February 24,  2014.  The website for the film  offers a lot of information about Aigue-Morte’s history. For more information about time, prices and where to see this 20 minute movie in Aigues-Mortes, click here.
Parking is available just outside the walls for day visits (look along Blvd Diderot first) and inside (with a card from your hotel) for overnight visits.
Market days are Wednesday and Sunday (in the morning) on Avenue Frédêric Mistral, just outside the walls. Look for regional specialties such as asperge “Celestine” (white asparagus grown in salty soil), pomme de terre des sables (potatoes grown in the sand), and carrotte des sables (carrots grown in the sand).

The Fête Votive begins the first Sunday in October and lasts several days.  This event centers around the Camargue bulls. The “bull games” in Aigues-Mortes are bloodless–at least for the bulls.  Called courses Camarguaise, bulls are brought into makeshift rings to face brave (or crazy?) folks called raseteurs who attempt to remove ribbons attached behind the horns of the bulls.  We saw a course Camarguaise around Easter one year, but apparently they no longer take place in Aigues-Mortes in the spring. Often called La Feria, they are held in other parts of the Camargue and in nearby cities around Easter, along with Spanish style bull fighting.

Wine production in the Camargue is documented to be in existence as early as the 15th century.  The phylloxera epidemic that decimated so many of France’s vineyards did not affect those in Aigues-Mortes because the vines grow in the sand.  Red, grey, rosé and white wines are produced in the region.

The predominant production at 94% of volume is for grey and rosé wines.  The grey, sometimes referred to as the “grey of grey,” and rosé wines both have a pale salmon color and are described as having an “elegant mouthfeel and freshness”. Main grape varietals for the greys and rosés are  Cabernet Franc, Cabernet Sauvignon, Carignan Noir, Carignan Gris, Cinsault, Grenache Noir, Grenache Gris, Merlot, Syrah.

Red wines only make up 4% of production and are described as having soft tannins and being  quaffable and aromatic. Main grape varietals for reds include Cabernet franc, Cabernet Sauvignon, Grenache Noir, Merlot, Marselan, Syrah, Petit Verdot.