EASTER IN PROVENCE MARKS THE START OF BULLFIGHTING 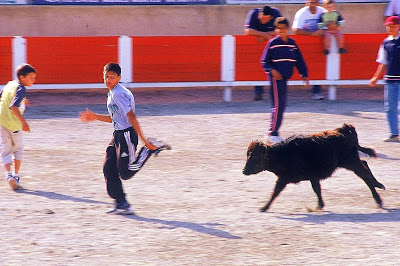 La Feria Corridas—the bullfighting festival—is so firmly ingrained in the Easter traditions of the Camarague area that, in this south western area of Provence, “Feria,” which means “festival,” seems to be synonymous, this time of year, with both Easter and bullfighting. In the main bullfighting arenas—Arles and Nîmes—as well as in the many small towns that set up temporary arenas, Easter weekend marks the start of bullfighting season.

We found ourselves in Aigues-Mortes one Easter weekend several years ago. And there, in one of the small, non-descript arenas temporarily assembled for La Feria, we learned about course camarguaise. 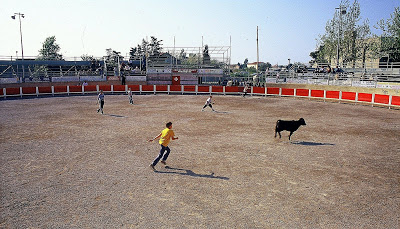 Aigues-Mortes, which comes from the Occitan language and means “Dead Waters,” actually lies just outside of Provence, in the Gard Department of the Languedoc-Roussillon region. But, like Nîmes and the Pont du Gard, they often get lumped into the list of worthy stops on a trip to Provence. 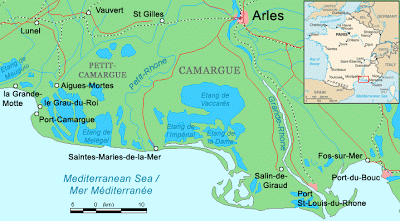 The Camargue is an approximate 350 square mile area of fabulous wilderness wedged between Arles and the Mediterranean Sea where the Bouche-du-Rhone meets the Gard department. Created over the centuries by the sediment from the Rhone River, one third of it is composed of water: seasonal marshes, lagoons, and salty plains. The northern part is a major rice producing area and the delta is a major salt producing area. Much of the rest of the Camargue is protected as a nature conservation area called the Parc Naturel Regional de Camargue. Commercial activity is severely limited by law, thereby protecting the black bulls, white Camargue horses, pink flamingos, and over 400 species of other birds. Although we have only seen the bulls in the arena, we have, on one trip or another, seen everything else, including an occasional gardian, otherwise known as a Carmargue cowboy! It’s is a beautiful area.

Until you get to Aigues-Mortes. It is really a shame that the well-preserved thick walls and tall towers that surround this 13th century city can’t be used to protect it from the hordes of tourists that descend upon it every weekend. But they and the tacky stores that line the medieval streets were probably what propelled us to explore other areas and discover La Feria.

There are two types of bullfights in the South of France. The Spanish-style, course corrida, is the kind most people are familiar with; although long a part of the Spanish culture and increasingly popular in the South of France since their introduction in 1853, these events are controversial, bloody, and gory.

In contrast, the course camarguaise (also called the course libre) is bloodless—at least for the bulls! The object is to grab the rosette tied between the horns of the bull. Each participant, called a raseteur, carries a hook, called a raset, with which he (or she) attempts to retrieve the rosette. A small group of raseteurs enters the ring with the bull and the game begins. Whoever snatches the raset first wins. I think that there may have been more than one raset in the matches we watched. A lot of time is spend running—running for one’s life or at least one’s limb, it appeared to me! Each rendezvous lasts about 15-20 minutes. The bulls are not killed—they are said to die of old age—and the bravest are honored with statues 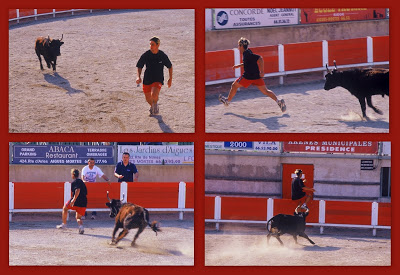 We seemed to have stumbled upon the preliminary show of novice raseteurs as some of the participants seemed quite young, having barely reached puberty. Another group looked to be in their late teens and twenties. There was one older man who seemed to have hit the pastis before entering the ring. 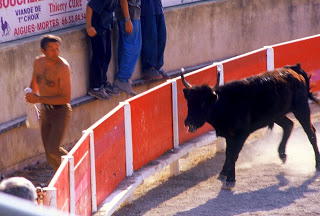 The crowd was sparse…but very enthusiastic. They oohed and ahhed and occasionally squealed with delight after a successful maneuver, one that made my knees wobble. There was a lot of milling around, chatting with one another outside the stands. Our daughter found a few children to play with (outside the ring!). We learned about the “bullfighting” by talking with those around us who were eager to educate us. It was clearly a community event. 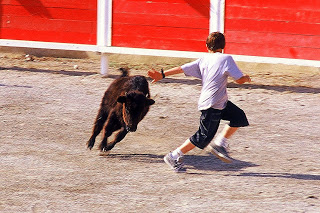 I thought of the soccer matches we attended at home where we watched our daughter play and, like here,  the spectators were entirely family and friends….but, at home, we were watching balls—not bulls! And one of the raseteurs was definitely a liability to the city of Aigues-Mortes although only us suit-conscious Americans seemed concerned.

We could have participated that Sunday in Aigues-Mortes! The announcer invited any raseteur wannabes to enter the ring. I encouraged my husband—Camargue bulls are a small breed and they had rubber balls on the tips of their horns—but he wouldn’t budge. I figured that I didn’t speak enough French (mercifully).

The people of the Carmargue know bulls. They are part of their culture and their local cuisine. The Camargue bulls have roamed the area for 2000 years, since Roman times.

The international organization, CAS (Comité Anti Stierenvechten) which is the largest group working toward the abolition of bullfighting, is also against courses camarguaises on the alleged grounds that they cause the bulls to suffer from stress, exhaustion, and sometimes pain. 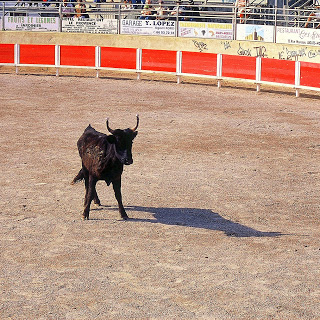 As our world becomes smaller, we increasingly come face-to-face with social mores that may differ sharply from our own and that we may find difficult to reconcile with our own values and beliefs. Within our own culture, of course, we may not share the same views. We all have to make our own decisions. I try to keep an open mind and to step into the shoes of others.

Courses camarguaises–really more bull games than bull fights–made for a fun afternoon for us, full of spirit and camaraderie. 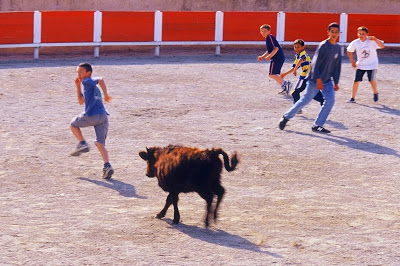 So, next weekend the bullfights commence…it must be Easter in Provence! 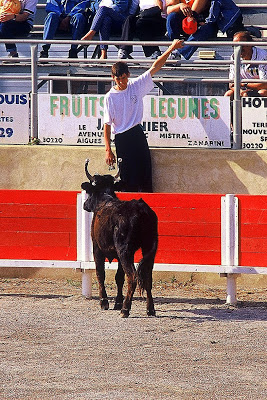