THE PONT DU GARD, A MUST-SEE SITE, IS MY PICK FOR A SUMMER’S LAST HURRAH! 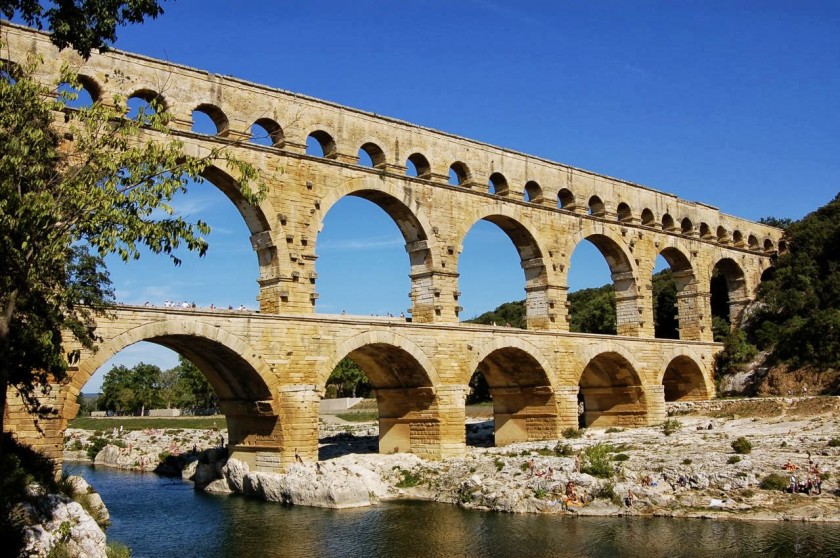 Over the valley, from side to side, and ever so high in the air, stretch the three tiers of the tremendous bridge. They are unspeakably imposing, and nothing could well be more Roman. The hugeness, the solidity, the unexpectedness, the monumental rectitude of the whole thing leave you nothing to say at the time and make you stand gazing. You simply feel that it is noble and perfect, that it has the quality of greatness. From A Little Tour in France by Henry James (1884)

People often write and ask me questions about Provence. A common one is “which site should we definitely see in Provence?” It’s a question that inevitably causes me pause, if not great consternation, for there are so many inviting places in Provence. So many that even after all these years, we still have a long list of places we haven’t seen…that we want to see. Beyond this perfectly valid explanation for my reluctance to commit to one, I have come to realize that I am part of a peculiar group of travelers for whom the draw of their favorite destination has expressly little to do with any must-see sites. 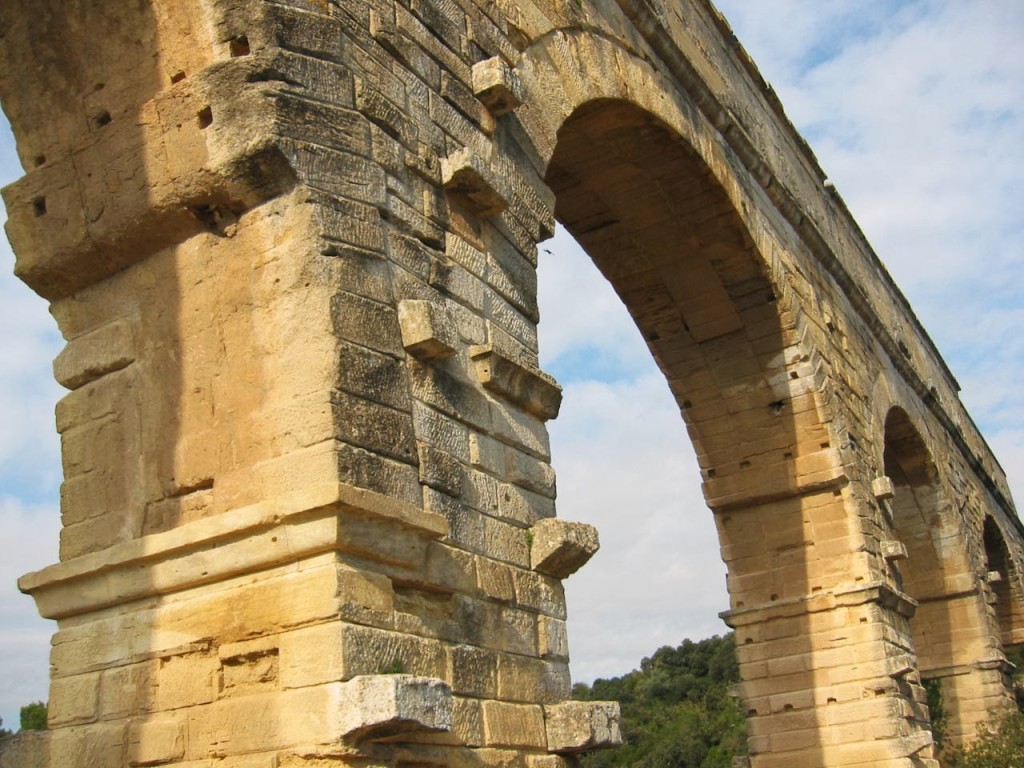 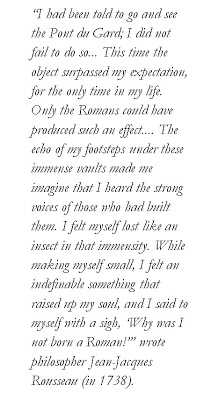 The allure of Provence for me, instead, is much more intangible. It’s the sun, the lighting, the markets, the garrigue aromas of the Luberon, the slow-paced life style, the long lunches punctuated with sips of the region’s famous rosé, and our friends. So, it stretches my comfort zone to step into the shoes of a tourist who develops his or her itinerary around must-see sites. There’s nothing wrong with that approach; it is just not my approach, so when put on the spot, as I was in a conversation last month, I experience a modicum of anxiety.

The moment I take the bait—as evidenced by the name of a site that I hear tumbling out of my mouth—another site pops into my head and I immediately retract the first one in favor of the second, a process that goes on until I appear so indecisive that the inquirer concludes he couldn’t possibly embrace any recommendation of mine anyway.

Still, there are sites I wouldn’t want that traveler to miss and if really pushed for one must-see site to visit—or “one last hurrah” to quote the peripatetic traveler whose path recently crossed mine—the Pont du Gard could be at the top of my list.

This recommendation hails from a person who kept the Pont du Gard at the bottom of her list for many years. I am embarrassed by the ignorance I harbored all those years. My only explanation, admittedly inadequate, is that I had already seen many… aqueducts in my travels and that what I had read in the tour books about Provence simply never elevated this particular aqueduct past all the other fabulous possibilities in Provence. Think of Les Baux-de-Provence, the Arènes in Arles, the Théâtre Antique in Orange, the Palais des Papes in Avignon, the Abbaye de Sénanque in lavender season, Les Calanques, and the Gorges du Verdon, to mention just a few of my favorite sites. Think of Lourmarin, Bonnieux, Saignon, Aix, Roussillon, St. Tropez, Vieux Nice, and Cassis at sunset, to consider just a fraction of my favorite villages and cities. 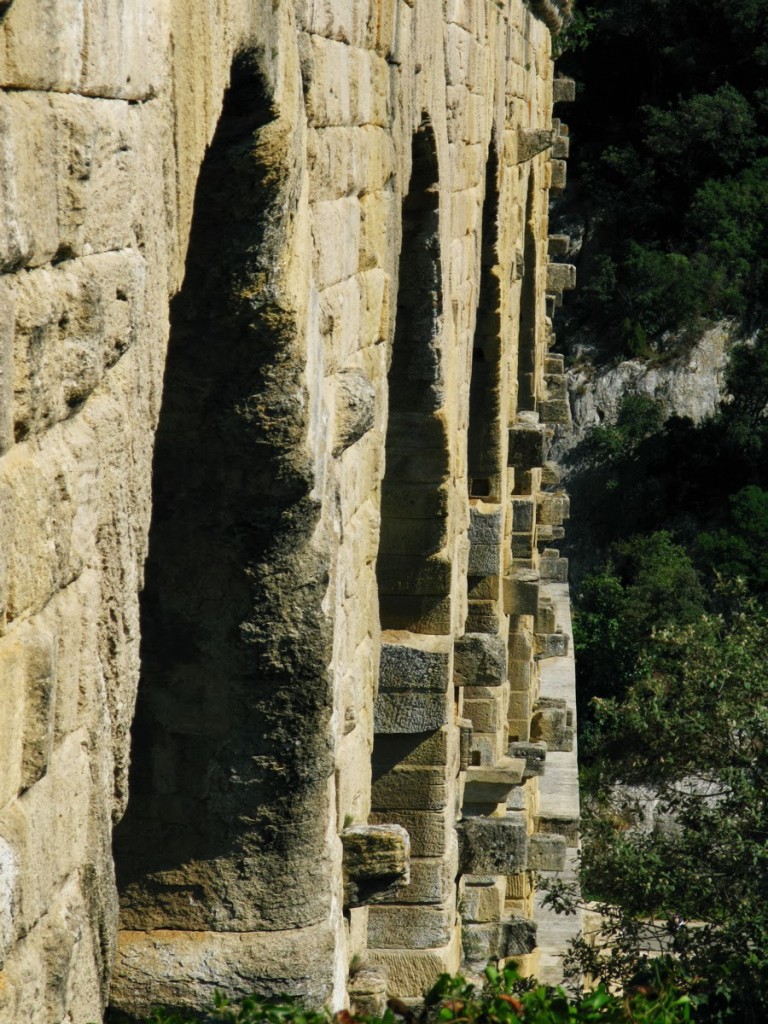 So what had I read in those tour books from our earliest trips to the region? I dug through a dusty box of old tour guides to see. The oldest of my remaining collection, a 1996 Knopf Guide entitled Provence and the Côtes d’Azur, devotes just one-inch by two-inches of print to the Pont du Gard: “On the way from Villeneuve-lès-Avignon to Nîmes, near Remoulins, do not miss this 2,000-year-old Roman bridge commissioned by Emperor Augustus’ son-in-law. Magnificently located, it stands 150 feet above the waters of the river Gard.” This description just didn’t reach out and grab me. Mais, mon dieu, was I wrong.

The Pont du Gard, I came to realize, is a masterpiece of Roman ingenuity and architecture, a testament to the Romans’ knowledge of sophisticated Roman technology (over 2000 years ago!) and to their remarkable appreciation of aesthetics (that transcends time). Not surprisingly, in 1985, the Pont du Gard was made a World Heritage Site by UNESCO (the United Nations Educational, Scientific and Cultural Organization). 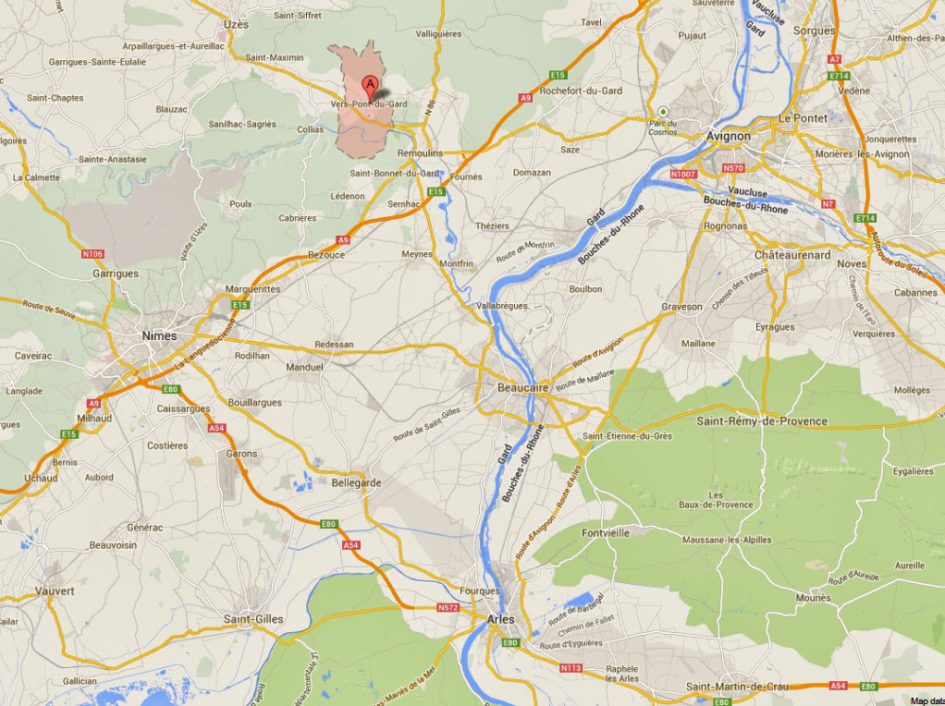 Pont du Gard (literally meaning “Bridge of [the] Gard”) is an exquisite aqueduct bridge that crosses the Gardon River, near Remoulins and not far from Uzès. (It lies just inside the Gard département of the Languedoc-Roussillon region of France and, thus, like Uzès and Nîmes, is not in Provence).

The Pont du Gard is part of the Nîmes aqueduct that carried water from a source near Uzès to Nîmes—a remarkable 50 kilometer-long (about 30 mile-long) journey! It is said to have taken 27 hours for the water to reach Nîmes! 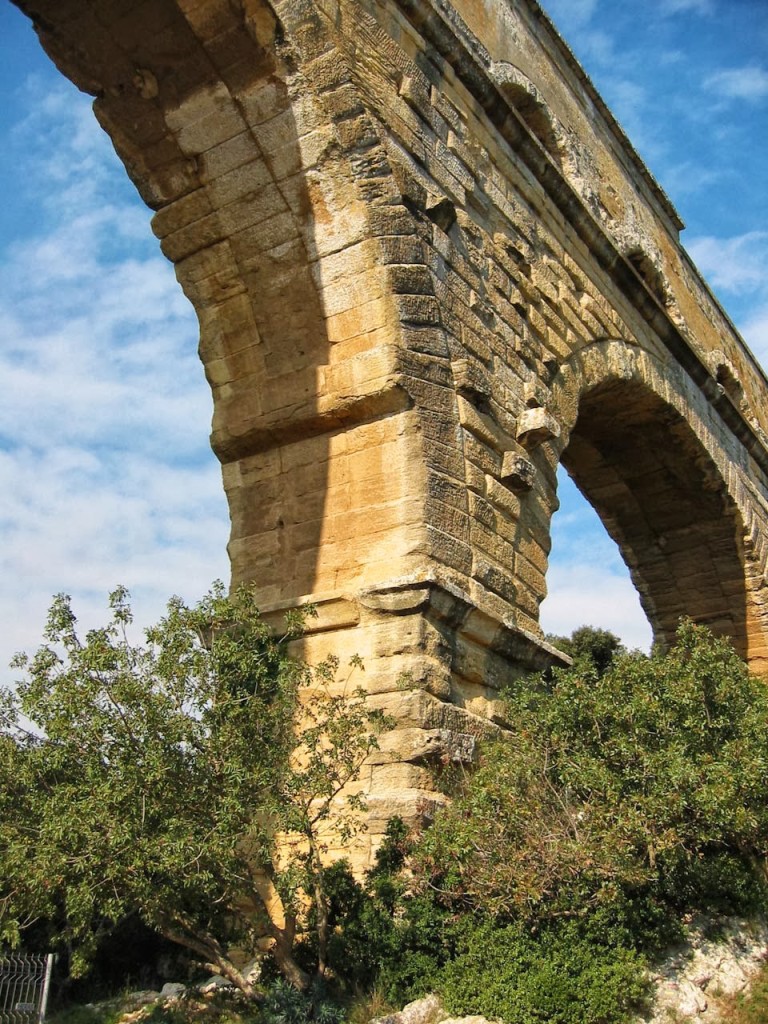 Archeologists generally agree that the aqueduct was constructed during the first century, not later than 60 AD. It is estimated to have taken 15 years to complete the entire aqueduct. It is said to have carried nearly 8 million U.S gallons (30,000 m3) of water each day to Nîmes where it filled the castellum divisorum (an open basin where the water was collected) and eventually supplied water for the Roman colony’s baths and fountains and the homes of important families.

Most of the aqueduct was underground. Crossing the Gorge of the Gardon River was the most challenging part of the project, taking five years to complete.

The Pont du Gard, the highest of all aqueduct bridges, consists of three tiers of arches, rising 164 feet (50 meters) from the ground and it spans 1200 feet (360 meters) across the gorge. It is constructed of limestone blocks excavated from a nearby quarry. It is considered the best preserved of all the remaining Roman aqueducts.

The Nîmes aqueduct remained in service until the 4th century. After the fall of the Roman Empire, the aqueduct was no longer maintained. Limestone deposits built up in the water conduit—if those deposits are anything like the calcaire deposits in my tea kettle in Lourmarin, I know that fulltime maintenance is essential—and plants grew into waterway, eventually clogging the passage of water. Further damage occurred when neighboring landowners removed stones from the aqueduct. But because the Pont du Gard was used as a bridge (for which tolls were collected), it stood in place. (When we first visited, motor vehicles still traveled across the bridge; I think they were banned in 2000.)

We have visited this site many times now and each time, the Pont du Gard stops me in my tracks. It is definitely my pick for the summer’s last hurrah! 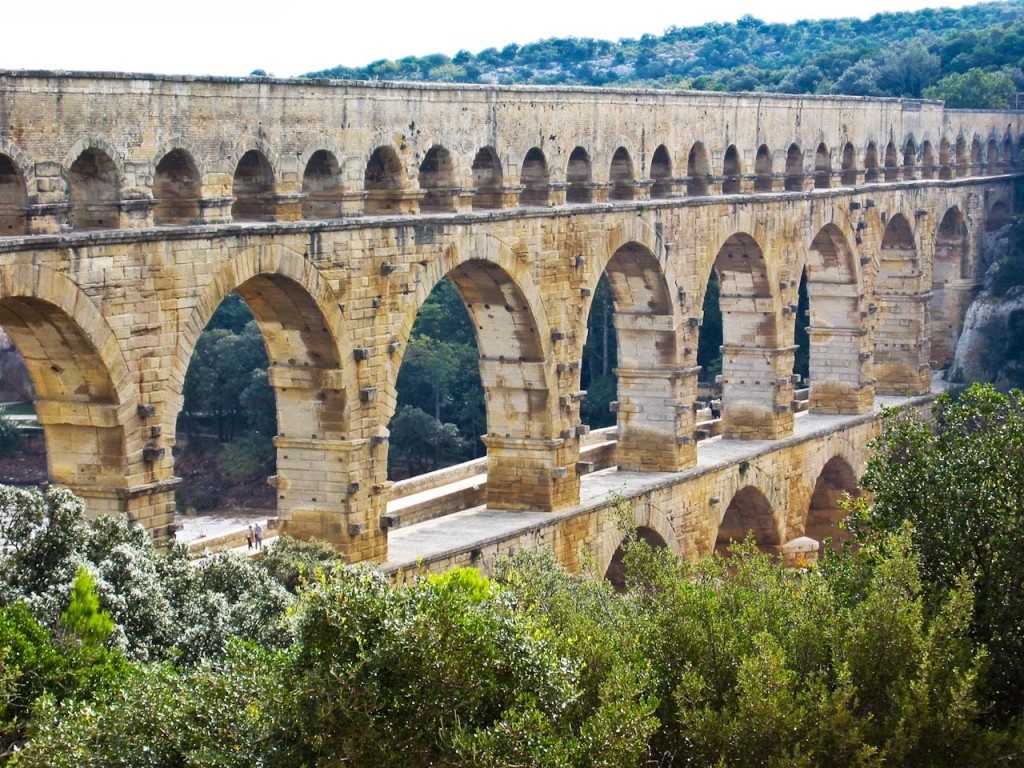 To find out more about this magnificent structure, I recommend a visit to the official website of the Pont du Gard http://www.pontdugard.fr/en/discover-pont-du-gard where you can learn more about its history and construction; find out about the (exceptionally interesting) museum as well as films and special exhibits; get directions and visiting hours; and take a virtual tour. There is a restaurant and snack bar (read on for my recommendations for lunch). Definitely take the tour through the water conduit (where you will be fascinated by the thick build-up of limestone). Wear good walking shoes so you can walk along the well-marked paths. Dip your toe in the Gardon River. Rent kayaks to paddle under the bridge.

September is a perfect time for a visit to the Pont du Gard. The tour buses that dominated the parking lots during July and August are long gone, taking with them the crowds of tourists that clogged the water conduit and blocked views of the river and the museum exhibits. I checked out the ten-day forecast—looks like beautiful days with temperatures in the high 70s (26 degrees C). 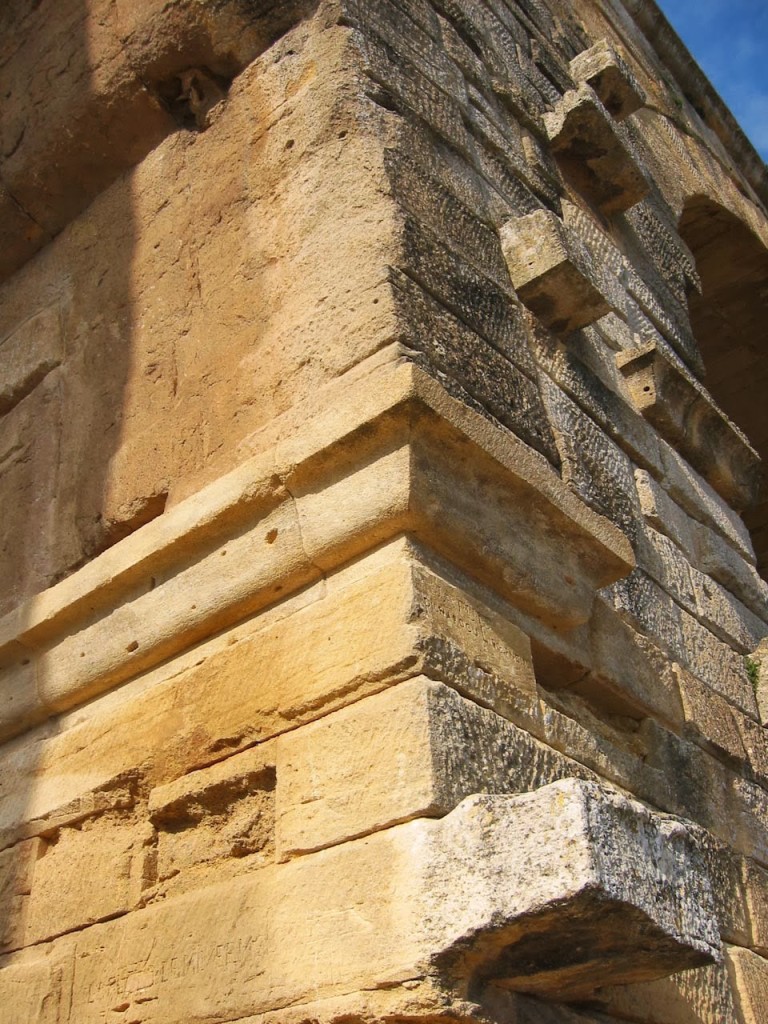 Later you can settle into a leisurely lunch with your favorite rosé — Pack a picnic lunch or plan to stop for lunch in Uzès, referred to as “The Hidden Gem of the South of France” in a recent New York Times article. Enjoy these last days of summer!