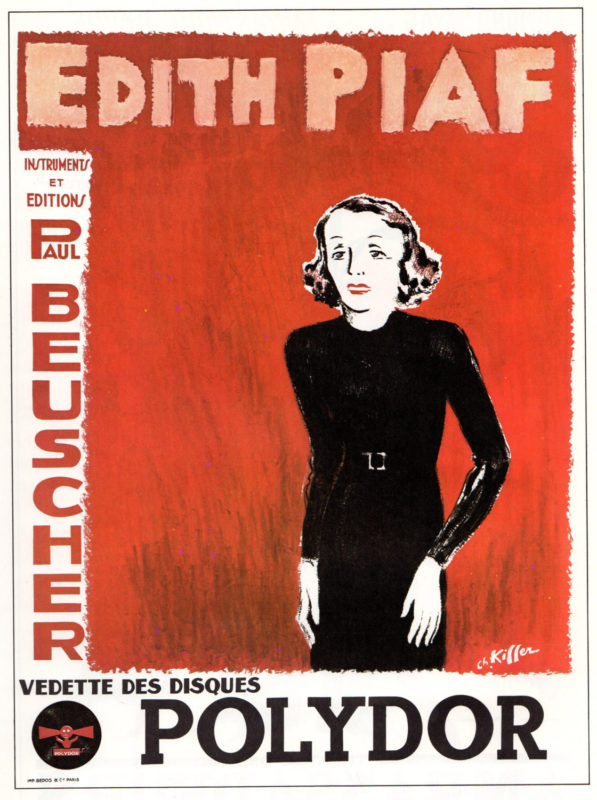 Last weekend brought another snowy Sunday to New England….and to parts of Provence. It snowed unusually hard in the Var where Trobador reader Pamela O’Neill said she had to brush off several centimeters of snow from her car. But the roads were so icy she could not go anywhere. So, what to do? If she were on this side of the Atlantic, we would have asked her to join us….

And what does a small group of Francophiles do in New Hampshire? Ah, mais bien sur, they gather ‘round the piano to listen to the music of France’s most famous chanteuse.

Édith Piaf, born Édith Giovanna Gassion in 1915, embodied in abundance what the French value in being French—tenacity, strength, romantic triumph and tragedy, survivalism, passion, and patriotism—all rolled into one tiny and nervous 4 foot, 8 inch frame. Known, as La Môme Piaf—“The Little Sparrow”—this petite powerhouse rose from the gritty working-class streets of Belleville-Menilmontant to cultural icon status during World War II with her incomparable spirit and songs like Mon Légionnaire.*

Piaf was born into a family in the entertainment business (although not the sort of entertainment that provided a regular paycheck). Her mother, Annetta Giovanna Maillard (1895 – 1945) was a café singer with…
Italian, Moroccan and French roots. Her French father, Louis-Alphonse Gassion (1881 – 1944) was a street performer who occasionally found a stage. His mother, with whom Edith lived from 1916 to 1929, owned a brothel in Normandy. The prostitutes are said to have been fond of the young girl and to have tended to her needs, including medical care. (They even arranged to have young Edith sent to Lisieux, the second largest pilgrimage center for spiritual healing, to treat her loss of eyesight due to keratitis, an infection that stems from herpes simplex virus.). At age 14, in 1929, young Piaf began working with her father in his street performances that took them around the country but she left him before long to perform on her own in Paris. At 17, she gave birth to her only child Marcelle who died two years later to meningitis.

In 1935 at age 20, while singing on streets of the Pigalle area of Paris, Piaf was discovered by nightclub owner, Louis Leplée. He instilled confidence in the promising performer, gave her the famous moniker that would later become part of her stage name, and promoted her toward stardom. But, Leplée was murdered the next year and Piaf was initially accused of being an accessory to his murder. Although she was acquitted, her career suffered from the negative publicity surrounding the case and prompted Ms. Piaf to seek help to change her image. As part of this effort, she changed her name to “Edith Piaf” and enlisted Marguerite Monnot, who had already composed songs for Piaf, to begin writing songs that incorporated the story of how the singer was able to overcome her impoverished past.

By the 1940s, Piaf’s career was back on track. She co-starred in a one-act play, Le Bel Indifférent, by Jean Cocteau; she befriended people like Maurice Chevalier, Jacques Borgeat, and Yves Montand (whose later fame Piaf is credited with establishing); and began to write her own lyrics. During the War when she is said to have performed for German forces and to have worked for the Resistance, her fame soared nationally and internationally.

As 1950s commenced, Piaf’s personal life careened off track. In 1949, her lover Marcel Cerdan, world champion (French) middleweight boxer, was killed in a plane crash. Two years later, Piaf sustained serious injuries in an automobile accident, leading to morphine prescriptions and eventual addiction. Two other serious car crashes followed and contributed to her continued addiction in spite of several rehabilitation attempts. She married Jacques Pills, also a singer, in 1952 and divorced him in 1956.

In spite of her drug and alcohol problems, Piaf continued to perform in Europe and abroad. In the mid-1950s, in the U.S. where her appeal was slow to emerge, she appeared on The Ed Sullivan Show eight times and at numerous packed venues around the country, including two appearances at Carnegie Hall.

Trobador reader Bob Haft and his wife Vicky are among those who got to see Piaf perform. “It was a long time ago,” Haft laughed. Indeed it was as long as 60 years ago. Since I can barely remember where I saw musicians when I was young (like Jimi Hendrix in the 1960s), I understand when he reports that he and his wife can’t say with complete certainty but they think the concert was in New York’s Palace Theatre on Broadway. They definitely recall that Piaf was “absolutely wonderful.”

In 1962, Piaf married Théo Sarapo, a singer, actor, and former hairdresser. She and her new husband performed together until her death.

In 1963, at age 47, Piaf died of liver cancer. Piaf’s life style prohibited her from having a funeral mass by the Roman Catholic archbishop of Paris, but tens of thousands of bereaved fans are said to have lined the Paris streets to see her funeral procession and over 100,000 mourners are said to have attended the ceremony at Père Lachaise Cemetery.

Brian Smith, who came to listen to Edith Piaf songs on the recent snowy Sunday, happened to be in Paris immediately after the news of Ms. Piaf’s death came out. He said he will never forget the tangible pall that covered the city. (Smith was passing through Paris from Lucerne, Switzerland to Antwerp, Belgium where he would board a freighter to cross the Atlantic to New York to begin his professional career as an architect; little did he know that he would arrive in the States just as a darker pall enveloped that city after President Kennedy’s assassination.)

Janine Kolb, who is French and grew up in central France at the same time Ms. Piaf’s career was taking off, wasn’t enamored by Edith Piaf when she was young. Now, she loves many of her songs, especially Non Je ne Regrette Rien and Hymne à L’Amour , and boy, can she belt out those tunes.

I first saw Kolb sing Piaf with Ray DeMarco, one of the New Hampshire Seacoast’s best known jazz pianists. We had stopped by the River House Restaurant for a “quick drink” and ended up staying until they tore down and packed up all the gear. With DeMarco’s piano accompanying Kolb—who is petite, just a few inches taller than Piaf and donned a beret and Piaf’s signature dark clothes—we were transported back to mid-20th century Paris. What fun!

“I’m crazy about the French language,” he said, but quickly added, “Her melodies are so rich and beautiful that they are fun to do just instrumentally.”

On this recent Sunday afternoon, DeMarco and Kolb teamed up to do several Piaf songs (as well as a few other pieces).

La Vie en Rose, which is generally translated to mean “Life in Rose-Colored Glasses,” is undoubtedly the song most associated with Piaf and considered by many to be her signature song, especially with the release of the 2007 movie by the same name. Piaf wrote the lyrics in 1944, allegedly inspired by a handsome American man she had seen, and Monnot wrote the melody. Her songwriting team was not keen on the song so Piaf did not sing it until in concert until 1946. It was an immediate hit and is credited with propelling Piaf into the international arena. It received a Grammy Hall of Fame Award 50 years later.

Hymne à l’Amour is another of Piaf’s signature songs written in the late 1940s. Piaf, inspired by her deep love for Cedan, worked with Monnot to write the lyrics. It seems that this song may be the favorite of both Kolb and DeMarco.

Non, Je Ne Regrette Rien, translated “No, I don’t regret anything,” is another of Piaf’s trademark songs. With lyrics by Michel Vaucaire and music composed by Charles Dumont, it was dedicated by Piaf to the French Foreign Legion. In 1956, when the song was first recorded, France was in the midst of what became known as the Algerian War (1954–1962). The Foreign Legion adopted the song in 1961 (when forced to retreat) and it is still sung today when they march in parades. 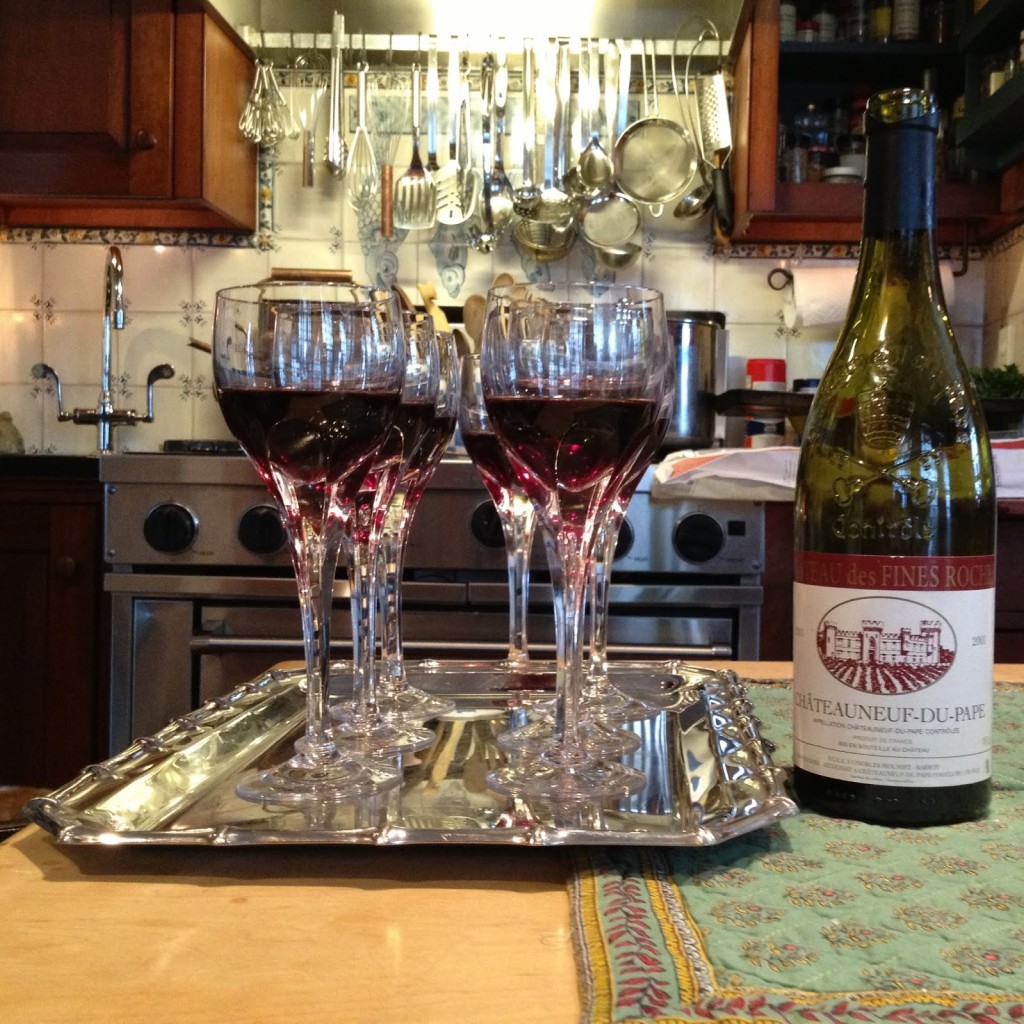 Quel jour merveilleux! Such a gathering called for a special bottle of wine. We opened a 2001 Château des Fines Roches from Châteauneuf-du-Pape. Like Madame Piaf, it was light bodied but rich and emotional in taste. We toasted to this famous French chanteuse who died 50 years ago in her villa in Grasse, on the Cote d’Azur. Apparently, Sarapo drove his deceased wife up to her beloved Paris so that it would appear that she had died in her birthplace, among her most devoted fans. Thus, there is some conflict about whether she died on October 11th or 12th. She is buried, next to her daughter, in Paris’ Père Lachaise Cemetery.

If you are a Piaf fan and in Provence, drop by Les Deux Garcons in Aix-en-Provence where Madame Piaf loved to have an apéritif or stay in the Negresco Hotel in Nice where she often stayed. If you are in Paris, there is the Musée Edith Piaf, the Père Lachaise Cemetery, and her old stomping grounds in her Belleville-Menilmontant neighborhood. For good information about where to go in Paris to follow Edith Piaf’s footsteps, see “The Echoes of Piaf in Paris” by Frederick Turner in The New York Times (1994)

I would welcome another snowy Sunday in New England if I knew we would be singing Edith Piaf songs again. 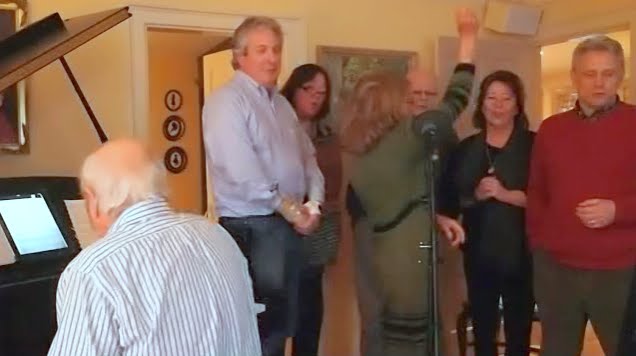 We are indebted to John and Linda Ellison for recording all of the songs for this post and, of course, to pianist Ray DeMarco and singer Janine Kolb who made the afternoon possible.

* Mon Légionnaire, composed by Raymond Asso with lyrics by Marguerite Monno, was recorded in 1936 by French singer Marie Dubas, but the song is much more associated with Piaf.