OUR BRIEF FORAY INTO THE WORLD OF TRUFFLE HUNTING 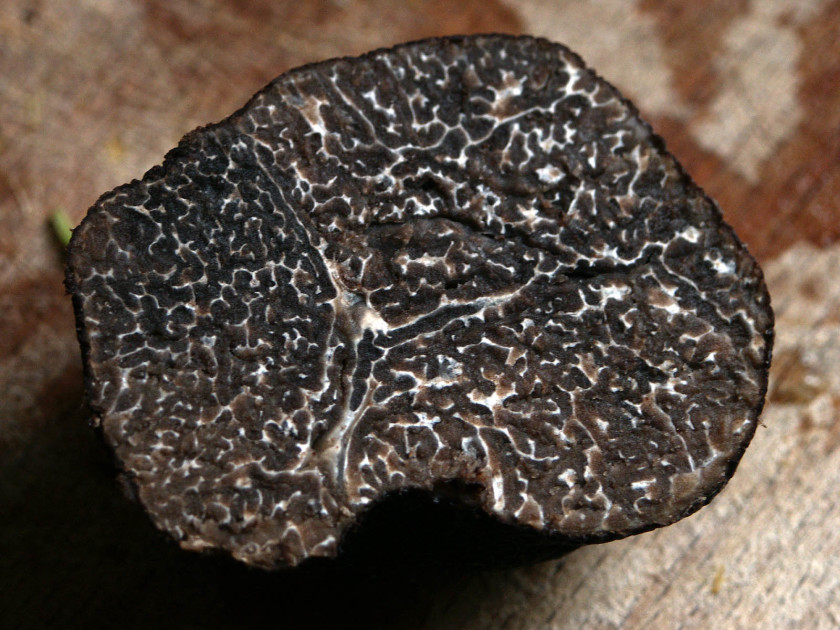 This week’s posting is written conjunction with David Scott Allen, Editor of Cocoa & Lavender, who is posting a two-part series on truffles entitled, “Life in Black and White.” This past Wednesday (11/24/10), he discussed black truffles and featured his wonderful recipe for Fettuccine with Truffle Butter. Next Wednesday (12/1/10), he will focus on white truffles with an accompanying recipe. Towny and I have had the pleasure of enjoying many meals with David and Mark—I assure you that you will not be disappointed with any meal one or the other might suggest. Enjoy The Trobador’s posting on our truffle adventures in Provence, including how to choose, store, and transport your truffles, and then go to http://cocoaandlavender.blogspot.com/ for recipes!

We agreed to meet Artur in the parking lot near the small traffic circle on the way out of the village toward Vaugine. 7:30 sharp. Dress warmly. Don’t bring the beagle (referring to our one year old dog Pal who was with us in France).

We had no idea what to expect when we received this coveted invitation to go with a local truffle hunter into the Luberon forest to hunt for truffles. As the chief supplier of these black diamonds to the best restaurants in the area, this trufficulteur—whom we knew best as our daughter’s coach—must know his business well. Knowing the mystique of the truffle trade, the lucrative nature of the business, and the clandestine aspect of any transaction related to this famous fungi, we were as nervous as we were psyched.

Tuber melanosporum is the scientific name of the French black truffle. Often referred to as the Périgord truffle because it is native to the oak forests in that southwestern region of France, this name causes some confusion because it is also found in Provence where it is referred to by the Provençal term, rabasse. In fact, the black truffle from Provence typically comprises about 80% of France’s black truffle market. This same black truffle or winter truffle also hails from Spain, Italy, Australia, and the United States.

The peak season has just begun, running from mid-November to mid-March. Depending on the quality, a one ounce fresh black truffle from Provence can set you back well over $100—if you can get your hands on one!

Lourmarin, the village in which we lived for six months, lies in the center of the most important truffle markets in the South of France. The largest market is in the wee village of Richerenches on Saturdays; this Vaucluse village is also home to the annual “Blessing of the Truffle,” a mass in which the truffles are blessed, an auction of truffles, and feast of truffle-laden foods held on the third Sunday in January (and previously discussed in our last posting November 7th). Two other significant markets in the Vaucluse are in Carpentras (Friday mornings) and Valréas (Wednesday mornings); and, in the Var, the Aups market is held on Thursday mornings. 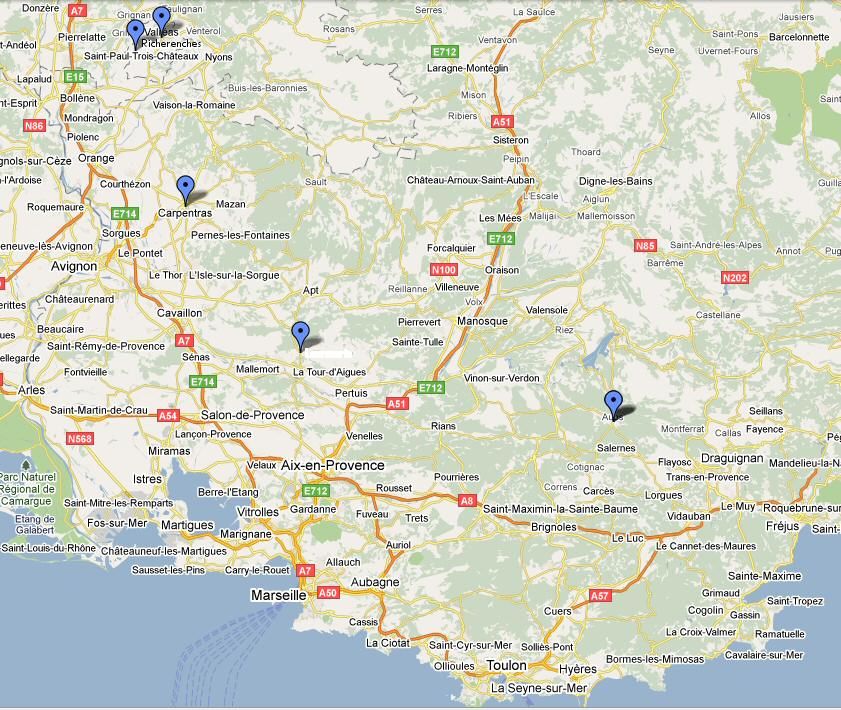 Perhaps I should insert a short geography lesson here: France is divided into 22 administrative regions, each of which is divided into departments. The Provence-Alpes-Côtes d’Azure region has five departments: Vaucluse, Var, Bouches-du-Rhône , Alpes-de-Haute-Provence, and Alpes-Maritimes. Périgord was once the name of the area now called the Dordogne department which is, today, part of the Aquitaine region. Many French people still refer to the area as the Périgord. Whew!

It was a chilly Sunday morning in mid-December when we made our rendezvous at the traffic circle. The skies were gray and the air was damp. We followed Artur along the main road for a considerable distance—one must be circumspect in matters of truffles and their location—and then turned off on to a dirt road where we traversed the rugged terrain on what looked like trails, deeply rutted by heavy rains. Towny, likening the roads to the African ones he learned to drive on, accelerated, explaining that flying over the ridges made for a smoother ride. (I was sure that if we didn’t lose a vertebra, we would lose our transmission and I had some vague recollection that our auto insurance excluded coverage on unpaved roads—the car had already been stolen twice and I worried that this adventure might put Peugeot over the edge!) Getting there certainly added to the intrigue!

Finally, Artur pulled over and parked. Not another car or building in sight, but lots of oak trees. Truffles have a symbiotic relationship with the oak tree (and certain other trees as well). Truffles (and mushrooms) form networks of fungi that are mycorrhizal; that is, they help supply essential nutrients and water to the tree and, in turn, receive sugars from the tree (a sort of indirect photosynthesis). Animals, such as squirrels, depend on truffles as a food source and truffles depend on those animals (as well as those who prey on those animals, like the owl who eats the squirrel) for spore distribution. And, the animals depend on the trees to live in. It is a really cool eco-system!

We had wondered whether Artur employed a dog or a pig to assist in the hunt. Dogs, usually a mixed-breed, are more widely used today. Pigs like to eat the truffles they find and, well, as I heard somewhere, “Dogs are a lot easier to put in the car!” We didn’t see either with Artur.

We stood by the cars and chatted for a while. Artur smoked a cigarette. He seemed in no particular hurry. Adjusting his beret, he explained that truffles are found around four inches or so below the surface. We should look around the base of the trees for ground devoid of vegetation. I had read that flies hover above the ground where truffles rest and, so, I intended to look for flies, too. He took his small hand-held rake and an equally small shovel from the car. I wondered if Artur didn’t use an animal when he suddenly opened the trunk and out popped the cutest mutt, clearly ready for duty. I don’t remember the command, if any, but that dog was off and running, nose to the ground and we had hustle to catch up. 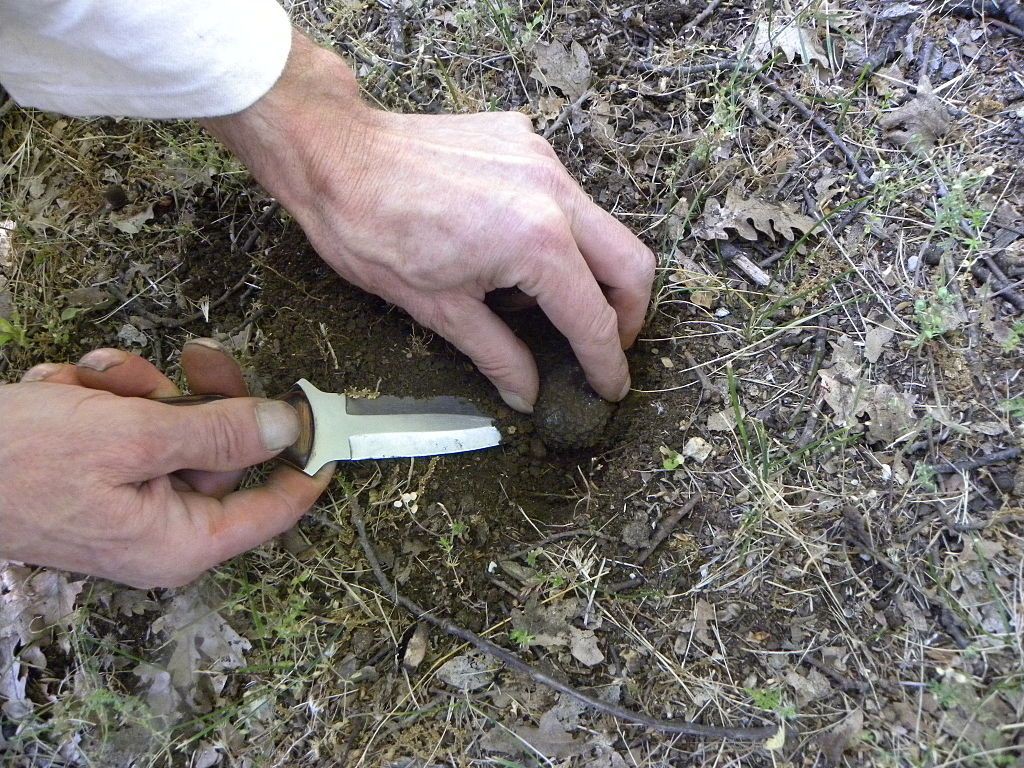 There were a few false alarms and then a jack pot of very small but highly fragrant truffles. He rewarded the dog with a piece of meat and we were in tow again. We walked a lot and waited a lot while Artur scratched the surface and carefully loosened the soil to see if truffles were waiting to be found. If so, he carefully unearthed them, wrapped a cloth around each one, and placed them in his bag. They would be brushed free of the outer later of soil later. We covered a lot of ground that morning, Artur’s bag grew heavier, and the time passed quickly.

Truffle hunting requires a great deal of patience and a very good relationship with one’s dog (or pig). To be honest, there was a lot of hunting relative to our successes. But the rewards are worth it: our dinner of roasted chicken with chopped truffles placed beneath the skin was outstanding and the next morning’s scrambled eggs were pretty memorable, too. Truffles exude a fragrance and  have a taste that elude description—earthy? woody? musky? Some would say, “very desirable” and leave that wide open to interpretation.

You never know where truffles might turn up when you are in Provence—Towny was having his hair cut in one of the hair salons in Lourmarin when local man came in with a brown paper bag filled with truffles for sale. The man’s behavior suggested he was selling some illicit drug, but, alas, it just the local black diamond dealer. “Ooohs” and “ahhhs” filled the tiny salon, as everyone stopped to have a whiff. Cash and carry. He sold out quickly. 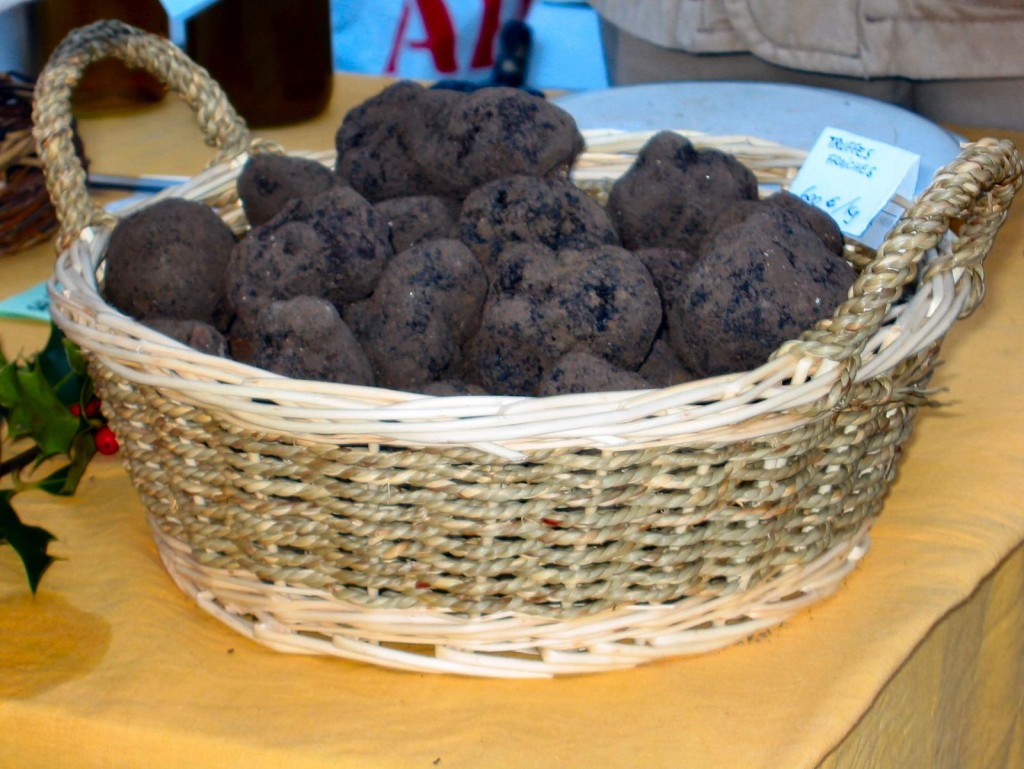 If you are not fortunate enough to go on a hunt for truffles with a friend and his dog–or to be in the right hair salon at the right time–visit one of the markets or festivals. You must arrive very early in the case of the markets and you may have to ask many questions to discover where the truffles are actually being sold.  The first time we went to Carpentras, we looked for tables with prominently displayed truffles and were perplexed when we could not find any truffle vendors.  We were later reliably informed that such transactions typically take place near the trunks of cars and in the backrooms of cafés and the truffles, covered in dirt, are likely to be wrapped in an old handkerchief and pulled out of a pocket.  At festivals, the truffles are prominently displayed in attractive baskets, but early arrival is still recommended.

You should know what to look for when choosing your truffle:  it should be a very rich dark brown-to-black color, bumpy or textured with some faintly visible white veining, firm, and fragrant. Ask that some of the soil be removed for a closer examination. It should not be spongy.  Your truffle need not be the size of a golf ball, but larger than a marble would be more desirable. 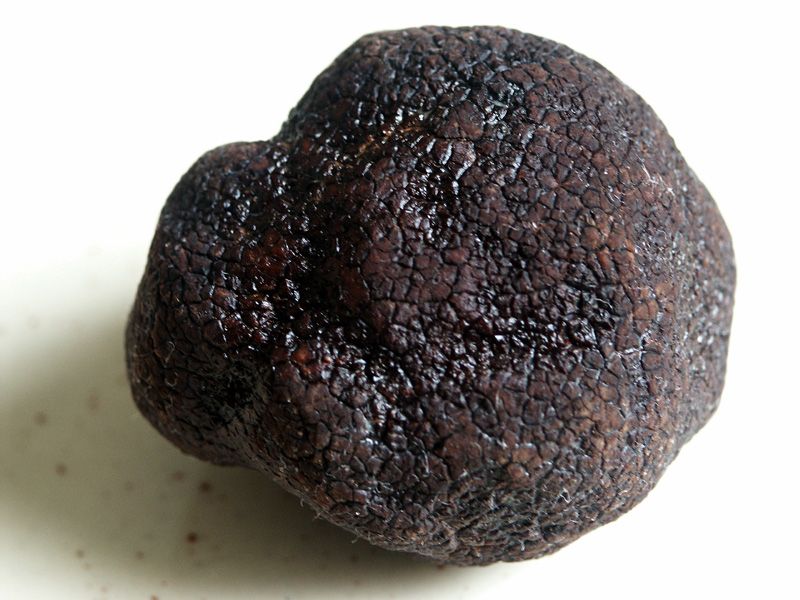 Although France’s truffle market is highly controlled by the government and inspectors regularly patrol the markets (and restaurants), truffles are a commodity that is a counterfeiter’s dream: very lucrative, high demand, hard to identify, and really cheap substitutes.  Chinese truffles are a likely substitute because they are a tenth of the price of the real thing.  Penalties for those sellers or restaurateurs who engage in such fraud can range from a couple hundred euros to up to 15,000 euros, but the culinary flogging that accompanies the fine might be a stronger deterrent: a public posting of their fraudulent activities.

Truffles should be consumed as soon as possible–not usually a problem–but, if properly stored in the refrigerator, they should remain fresh for about a week after unearthing them.  Each one should be wrapped in a paper towel and placed in a paper bag or  glass container.  Some people suggest storing truffles in rice; others say that the rice steals the aroma of the truffle.

We have successfully transported our truffles home from France by packing them in glass jars, surrounded by Arborio rice (later used in risotto),  and carrying them in insulated tote bags.
A fresh truffle–Périgord  or rabasse–sounds very appealing right now. I am thinking of David’s Fettuccine with Truffle Butter or Patricia Well’s Artichoke Parmesan Black Truffle Soup or a warm brie stuffed with truffles (as we had in Richerenches) or a simple risotto. Hmmm….I am thinking that our beagle could learn some new tricks.