Cabrières d’Aigues, home of the Domaine de Vaudois, is not on the typical traveler’s itinerary. It lacks the visible charm of other Luberon villages such as those featured prominently in a Rick Steves’ tour guide or a Peter Mayle novel. In fact, a quick google search for information about this village reveals little more than “a tranquil village in the Luberon” and the distance to neighboring villages, like Cucuron and Ansouis. But, don’t underestimate what you might discover in a morning in this unassuming village. 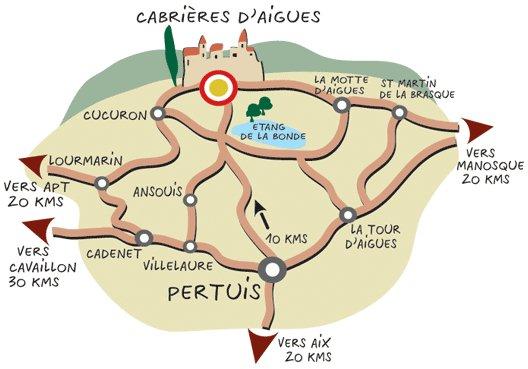 If you are interested in a destination that is slightly off the well-worn tourist path, plan a stop in Cabrières d’Aigues and drop by the Domaine des Vaudois. There, you can enjoy wine and taste olive oil in the 17th century vaulted rooms of this winery while hearing stories about the tumultuous history of Protestantism in Provence. You won’t be disappointed.

We spent a most memorable morning with Claude Aurouze, whose son oversees the wine and olive oil production of the family’s property. Aurouze’s wife is a direct descendant of the Vaudois, a Christian sect that, in the 15th century, moved to the religiously tolerant Luberon and, several generations later, their peaceful existence was torn asunder in a misguided effort to protect the Catholic Church. 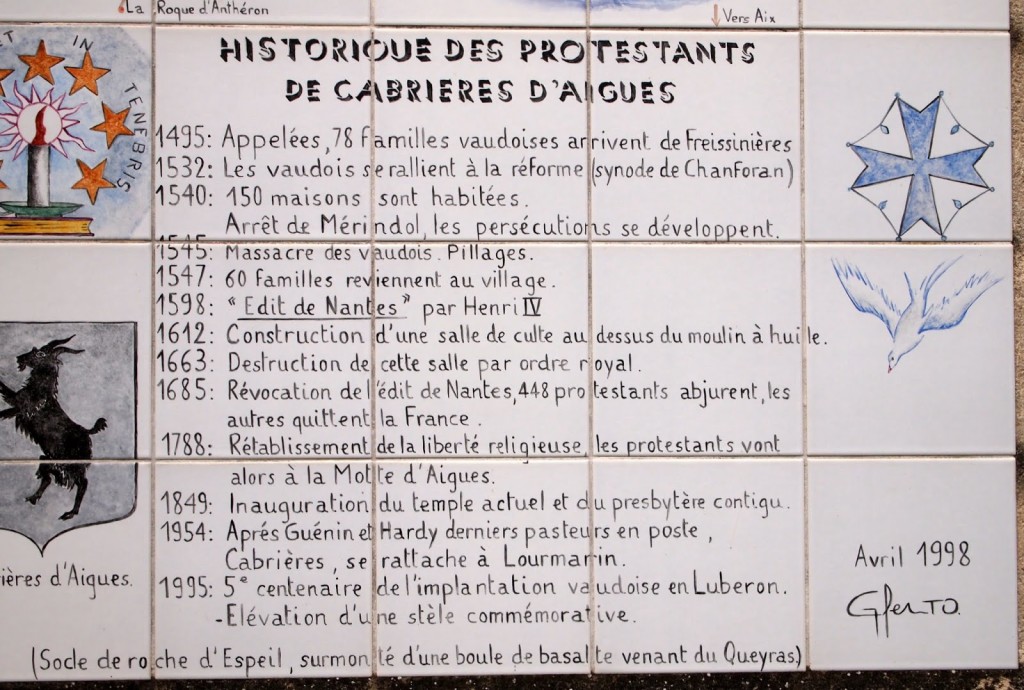 Madame Aurouze’s family can be traced back to one of the original 78 families that relocated to this village from what is now the Hautes-Alpes department of Provence. Monsieur Aurouze, a retired high school teacher, has made the Vaudois–researching their history and telling their story–his life’s work. His poignant stories will capture your heart.

If you are from South Africa, you may be particularly interested in chatting with Monsieur Aurouze: many of the Vaudois of Cabrières d’Aigues eventually went to South Africa, via Holland, and took with them the knowledge of farming vineyards and producing wine. But, I am getting ahead of the story.

The Vaudois movement was founded by Peter Waldo in the 1170s in Lyon, France. About ten years earlier, Waldo, a wealthy and learned man, was moved by trobadours’ stories of Saint Alexius who is said to have abandoned his comfortable life in favor of one of poverty. Waldo ridded himself of all his property and adopted a life of poverty. He began to preach the virtues of simplicity and a strict adherence to a literal interpretation of the bible, while criticizing the excesses of the Catholic Church. By 1170, his message had attracted a large following and a name: the Vaudois or the Waldensians.

Condemned by the Church in 1179 and excommunicated in 1184, the Vaudois were forced to flee Lyon. They settled in remote areas in Piedmont, South Eastern France, and eventually in the Luberon, too. Their message spread quickly and, in 13th century, the number of followers across Europe had grown quite large, especially in France, Germany, Poland, Austria, and parts of Switzerland. Around the same time, another Christian group emerged–the Cathars or Albigensians–that also challenged the basic tenets of the Church.

In 1465, the Vaudois moved to the Luberon. They lived simply and productively. Most were farmers, many tending vineyards. Fifty or so Vaudois families were invited to Lourmarin by Lord Foulques d’Agoult to work on the building of Lourmarin’s château. 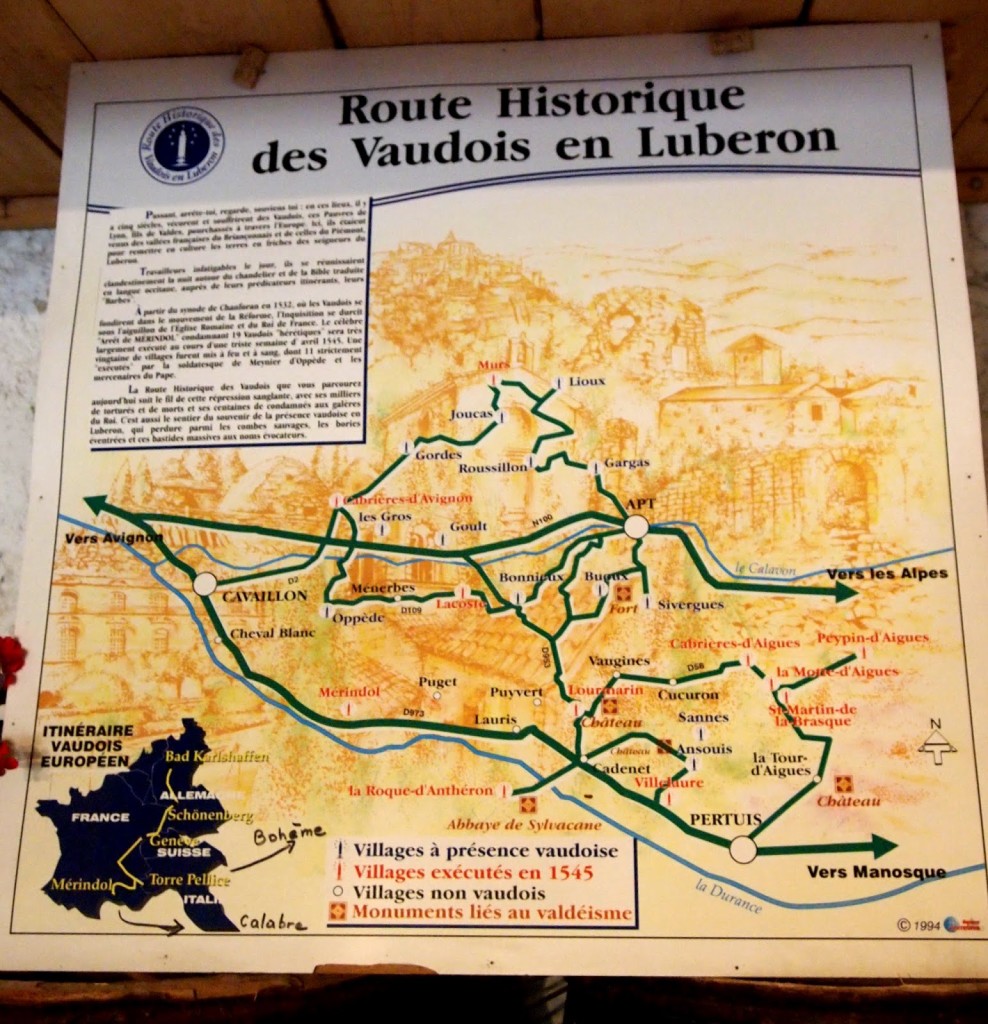 Monsieur Aurouze explained that during this period, villages in the Luberon were “either Protestant or Catholic.” The largest “Protestant” communities were Cabrières d’Aigues, Lourmarin, and Mérindol, but both groups lived amicably until the early 16th century when the unfounded fears and rumors led the Church to feel threatened by the “heretic ” Vaudois.

In 1545, one of the bloodiest , most vicious attacks occurred, especially in Cabrières d’Aigues and Mérindol. As many as 3000 people were killed. Mérindol was burned to the ground. Lourmarin was set afire but was not destroyed. As many as 20 villages were burned. It is said that at least 800 men, women, and children were captured and taken to Marseille to be tried for heresy. Over 200 people reportedly died while waiting to be tried and the rest were sentenced to forced labor in prison.

The brutality of the attacks in the name of the Catholic Church were widely condemned by influential members of the Church. Life gradually went back to normal. By this time, the Vaudois had begun to adopt the Calvinist teachings and were generally referred to as the Huguenots. The Protestant movement grew and, by 1560, there were 60 Protestant churches in Provence. In 1562, the Wars of Religion began with a vengeance and horrible acts were committed by both sides. The Vaudois fled the villages in to the caves of the Luberon, not to return for several years. 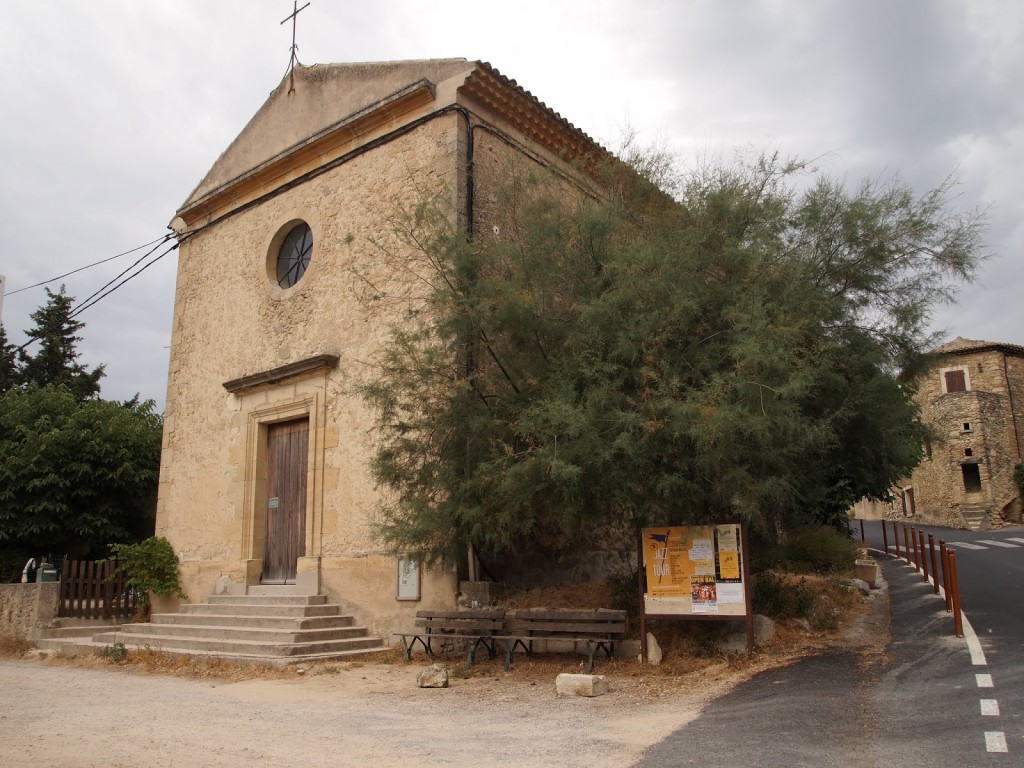 In 1598, the Edict of Nantes was promulgated, supposedly giving the Protestants most of the civil and religious freedoms afforded Catholics. But tensions remained and laws were enacted to limit these freedoms. By the time the Edict was revoked in 1685 most of the Huguenots had already fled Cabrières d’Aigues and the Luberon.

Many of the descendants of the original Vaudois families of Cabrières d’Aigues made their way to Holland and, eventually to South Africa. There, they started the vineyards that, today, produce some of the best Franschhoek wine. Some of the wineries–Haute Cabrière, La Motte, Anthonij Rupert L’Ormarins–have names reminiscent of their Luberon roots.

Monsieur Aurouze said that many visitors from South Africa drop by to hear about the history of the Vaudois and to learn more about their own families that once lived in this unassuming village in the Luberon, as many as 500 years ago.

Domaine des Vaudois wine, AOP (AOC Luberon) comes in all colors and is very enjoyable. We were particularly taken with the Viognier wine. We brought several bottles back to Mas du Bassin where we were staying.

The olive oil is excellent–light and very flavorful. In 2009, they began converting their groves to “organic farming” and with this year’s harvest, the olive oil will be officially organic. If time permits, perhaps you might be able to see the 17th century olive oil mill. 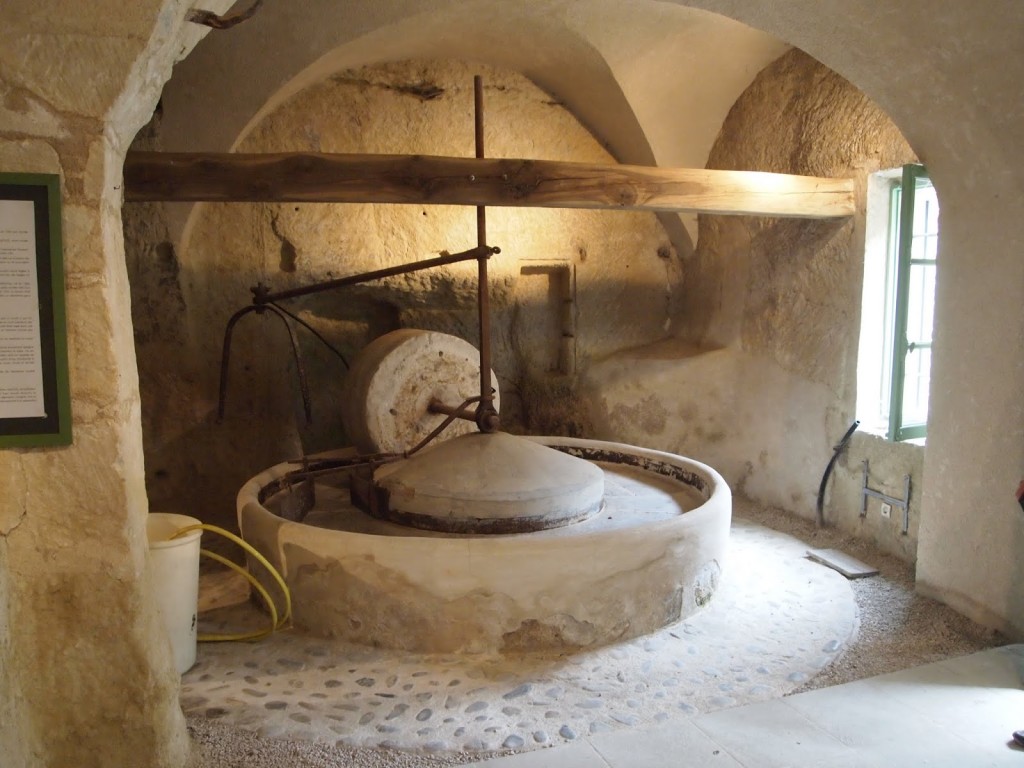 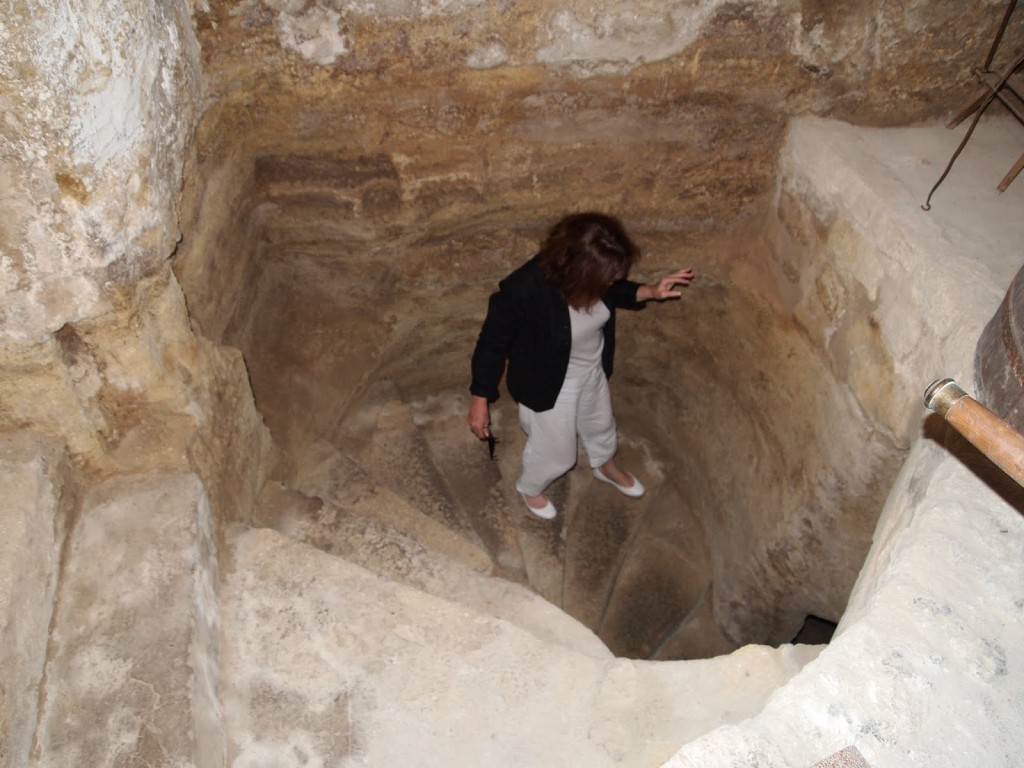 Cabrières d’Aigues may not be oozing with charm like its well-known neighboring villages but it has a certain allure that we found very charming (and, Monsieur Aurouze is irresistible). The village may not be on the itinerary of the typical tourist….I guess you must ask yourself if you are the typical tourist.

Print
2013-05-06
Previous Post: WHILE WAITING FOR PROVENCE’S LAVENDER SEASON, ENJOY THOSE GORGEOUS POPPIES!
Next Post: CHÂTEAU MIRAVAL: A CELEBRITY LONG BEFORE BRAD AND ANGELINA MOVED IN