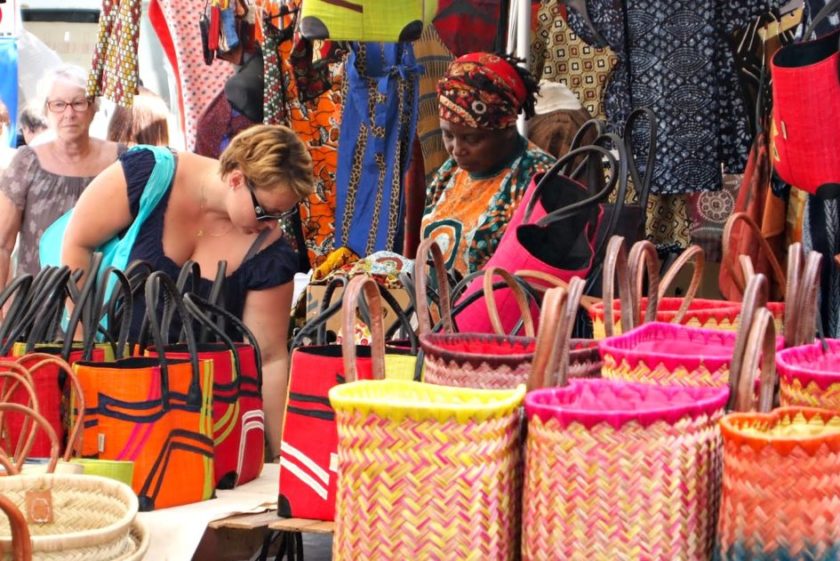 Sixty kilometers (38 miles) from Lourmarin, in the French department Alpes-de-Haute-Provence, lies Forcalquier where, every Monday morning, a lively market transforms the sleepy city. It is well worth the hour-or-so drive from Lourmarin to go to the market as well as to see a different side of Provence. So different that, in fact, some would not even consider this area Provence.

Technically, Forcalquier is part of Provence. The administrative region of Provence-Alpes-Côte-d’Azure (PACA) certainly includes the departments of Vaucluse, Bouches-du-Rhône, Alpes-Maritimes, parts of Hautes-Alpes, as well as Alpes-de-Haute-Provence. Ask most people what departments define Provence and most will include at least the Vaucluse, the Bouches-du-Rhone, and Alpes-de-Haute-Provence in their definitions. And, as far back as the 2nd century BC, Forcalquier was located within Provincia Romana, the Roman’s first province past the Alps and was called Furnus calcarius, the Latin name for the lime ovens used at the time.

But, the city is not included in Michelin’s guide to Provence or Rick Steves’ Provence and The French Riviera. And if you read a lot of Peter Mayle—for the Rip Van Winkles of the world, Mayle is the English author who wrote A Year In Provence—you may come away with the misbegotten notion that Provence consists only of the Luberon and its immediate environs, extending maybe a boule’s throw outside the Vaucluse. The Luberon, an area centering around the bucolic Natural Park of the same name, is brimming with culture, history, and beauty. It is Peter Mayle’s Provence. But, Provence is much bigger and varied. Go to the Monday morning market in Forcalquier, widely considered the most important market in all of the Alpes-de-Haute-Provence, and see for yourself! 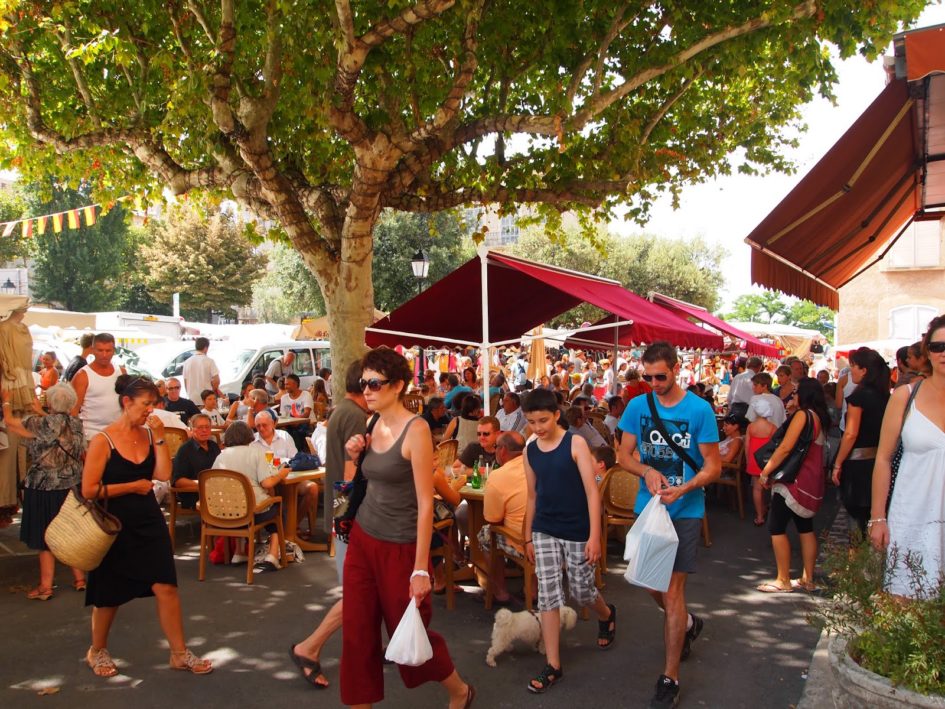 Known as Giono country because Jean Giono, a prolific French author who was born and raised in nearby Manosque (1895 -1970) wrote more than 50 novels as well as poetry, and plays set in this area of Provence. His Le hussard sur le toit (Horseman on the Roof) is an interesting…
story (1951) and very good movie (1995) about an Italian nobleman who finds himself in France’s 1832 cholera epidemic, while trying to raise money to fight the Austrians for Italian independence. It is filmed, in part, in Forcalquier (and in Cucuron) and stars Juliette Binoche but I digress….I promise to write more about Giono and this novel in a later post.

Back to the market: wear walking shoes and arrive early as this is a very popular market and good parking places are at a premium. As you enter Forcalquier along the N100 from the east, there is a parking lot where shuttle service is available. You may keep going and get lucky and find parking before you arrive in the center of the market; if not, keep going through town where you will find other parking lots or perhaps a spot on the street. 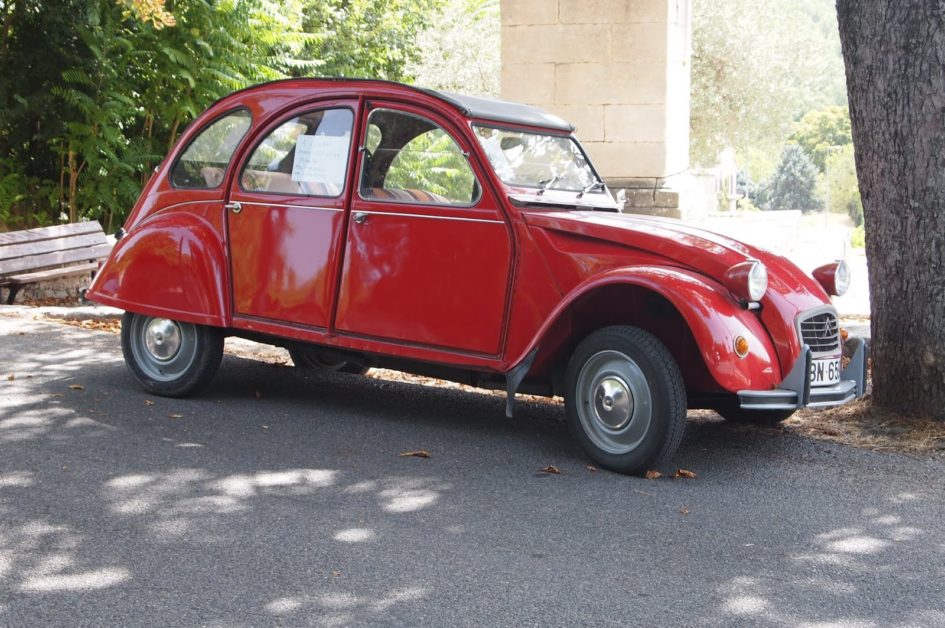 As you enter Forcalquier, you will recognize that this was once an important city and the seat of some power. In the 11th and 12th centuries, it was the prosperous capital of Haute Provence and oversaw Manosque, Sisteron, Gap, Embrun, and Apt. Forcalquier even produced its own currency. When its powerful position came to an end, Forcalquier was consoled with the title, Cité des Quarte Reines, because each of the four daughters of one of the Counts married Kings, including one who married the King of England Henry III. 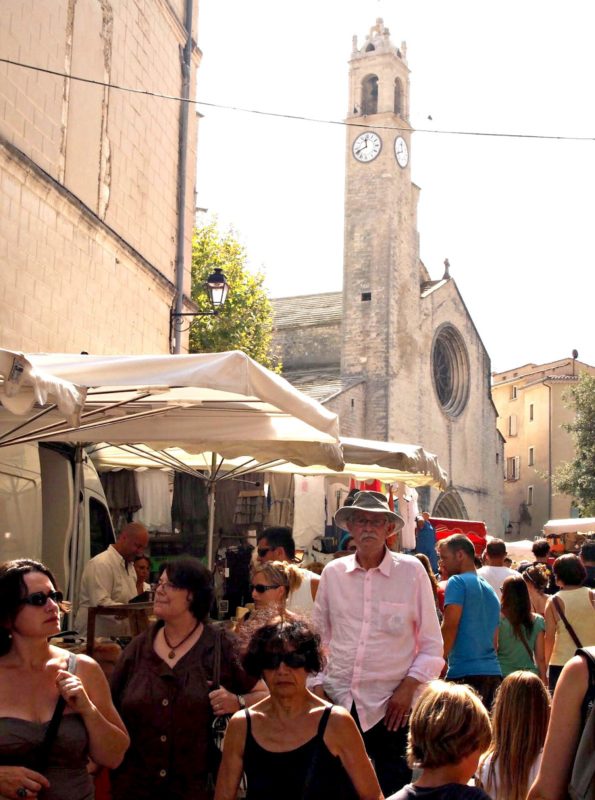 The hub of the market is located on Place du Bourguet. With the lovely backdrop of the 13th century white stone Cathedral, Notre Dame de L’Assomption (aka Cathedral of Notre-Dame-du-Marche), the market flows out from there. There are well over 300 stalls lining the main street and wrapping around and up and down the side streets, spilling into other places. 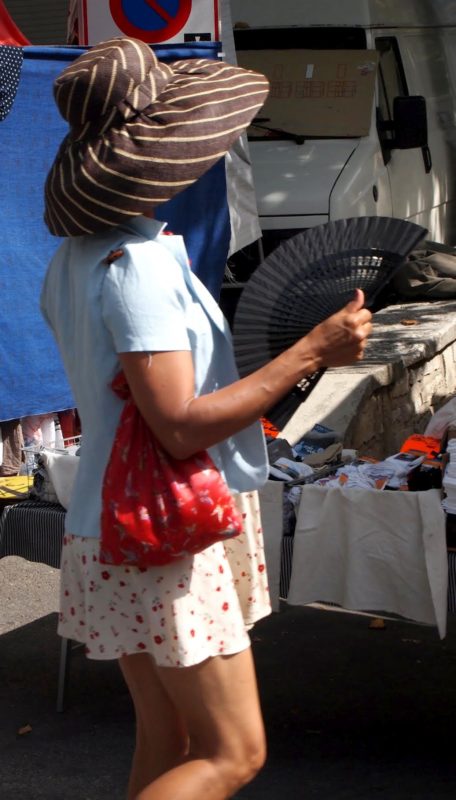 Although it attracts many people, it doesn’t feel crowded like, say, the market at Isle-sur-la-Sorgue on a summer Sunday. It is a very festive atmosphere with lots of chatting and laughing as people stroll, shop, and catch up on the previous week’s activities. Even the dogs stop to visit one another! 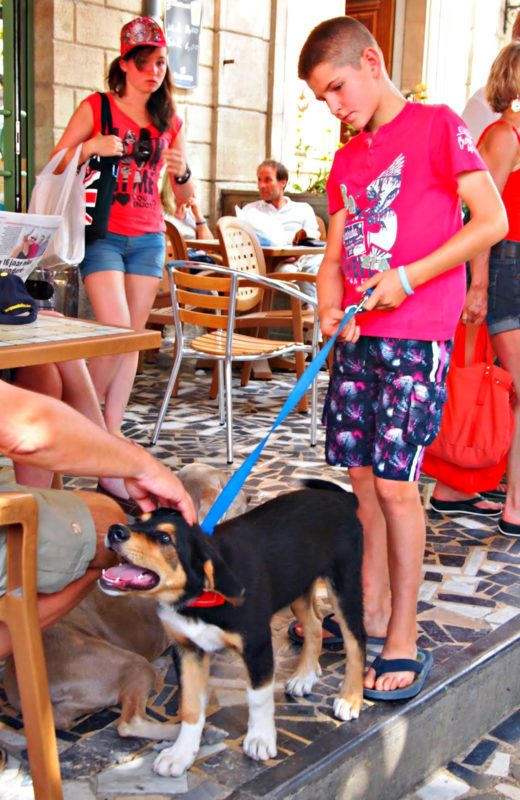 The market is known for its wide selection of organic (biologique) products: many types of bread, produce, and locally-made products.

There are also lots of prepared foods like ravioli and other types of pasta, quiche, and paella, all of which were very tempting but the evening’s dinner menu did not include any of these goodies. 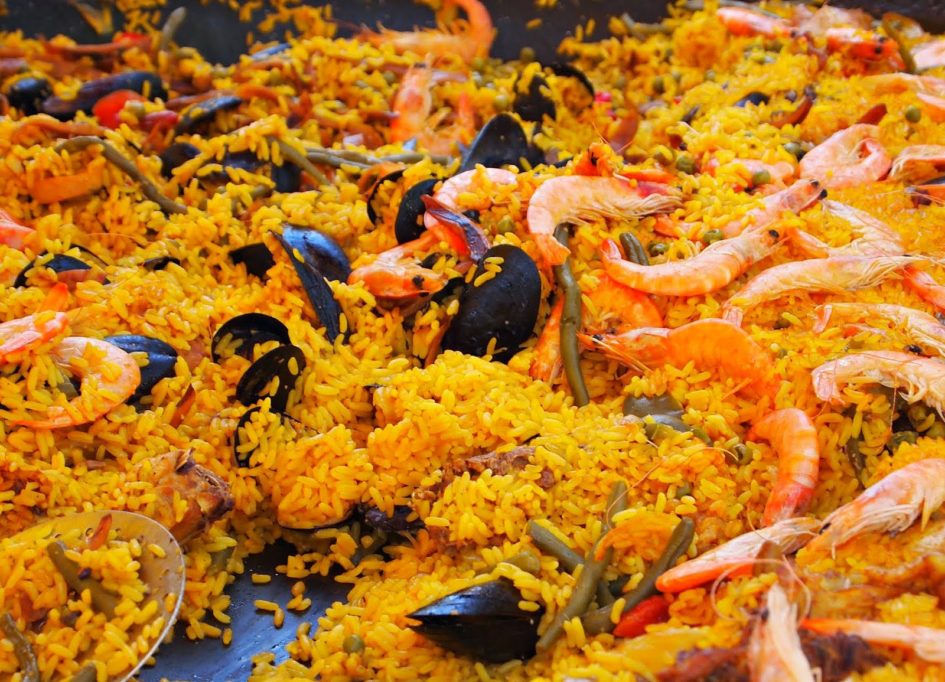 There are not many clothes and accessory stands as other markets but there is an excellent selection of Provençal fabrics by the meter and an area devoted to arts and crafts. 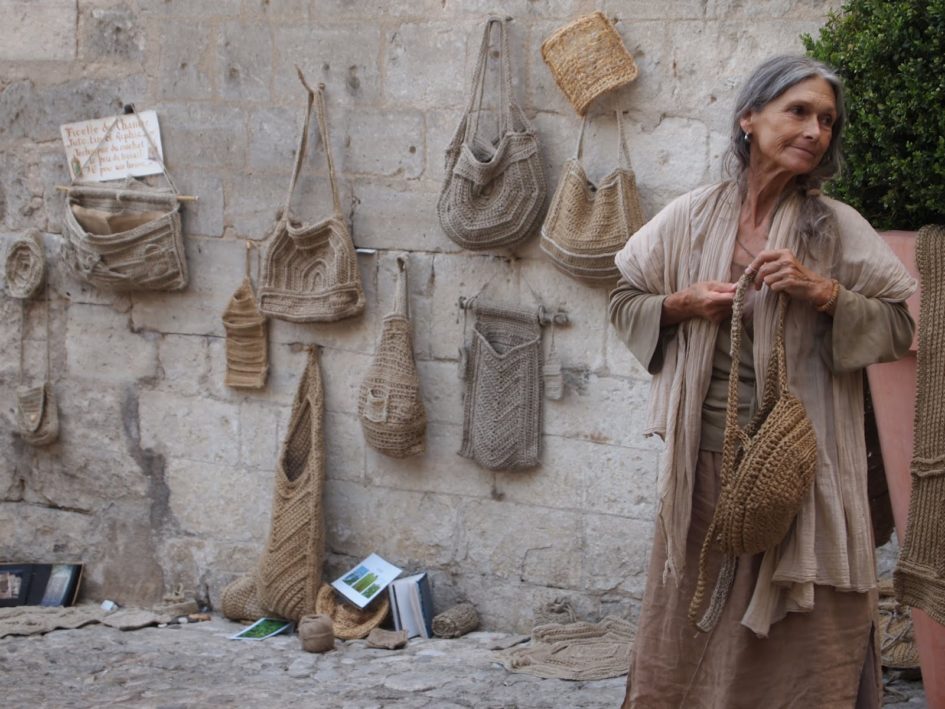 As you walk around, note the homes, especially those behind the cathedral as they date from the 13th to the 18th century. Look for the 16th century fountain with the interesting carved decorative figures in the Place Saint-Michel.

We stopped at Café du Commerce in the center of town, where there are several cafés from which to choose, all very crowded. We were lucky to find a table but not so lucky in getting served. The frazzled—but very friendly—waiter arrived after we had diligently recorded all of our observations, made a significant dent in our stack of postcards, and used the restrooms. 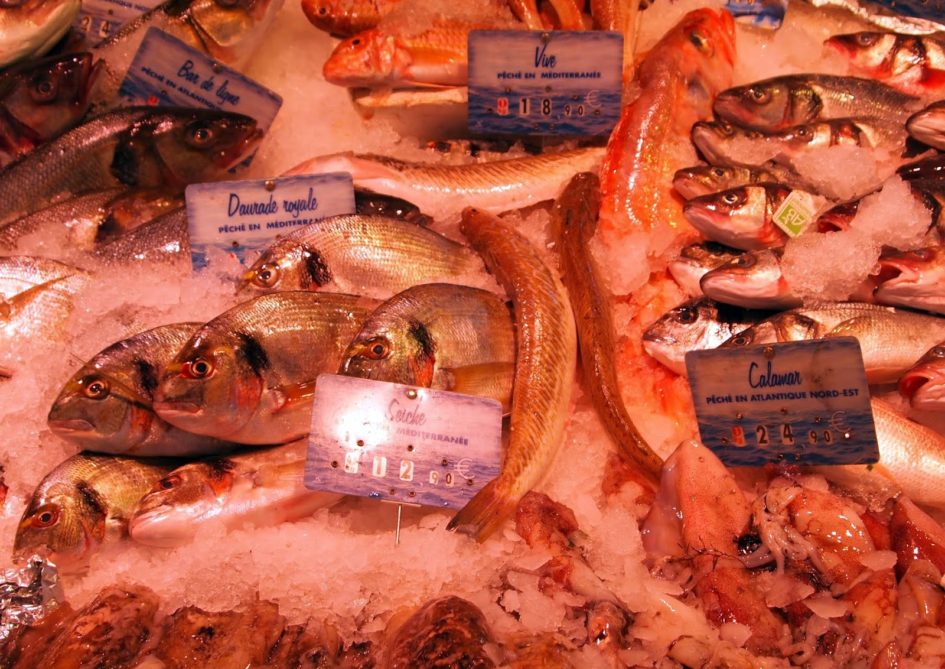 We had to bypass a glorious fish stall on our way to Boucherie et al Plus where we bought steaks and freshly made sausage for the grill—we were having an American barbeque for our French friends that evening. The butcher shop was excellent and very helpful, wrapping the meat in ice for our trip back to Lourmarin. 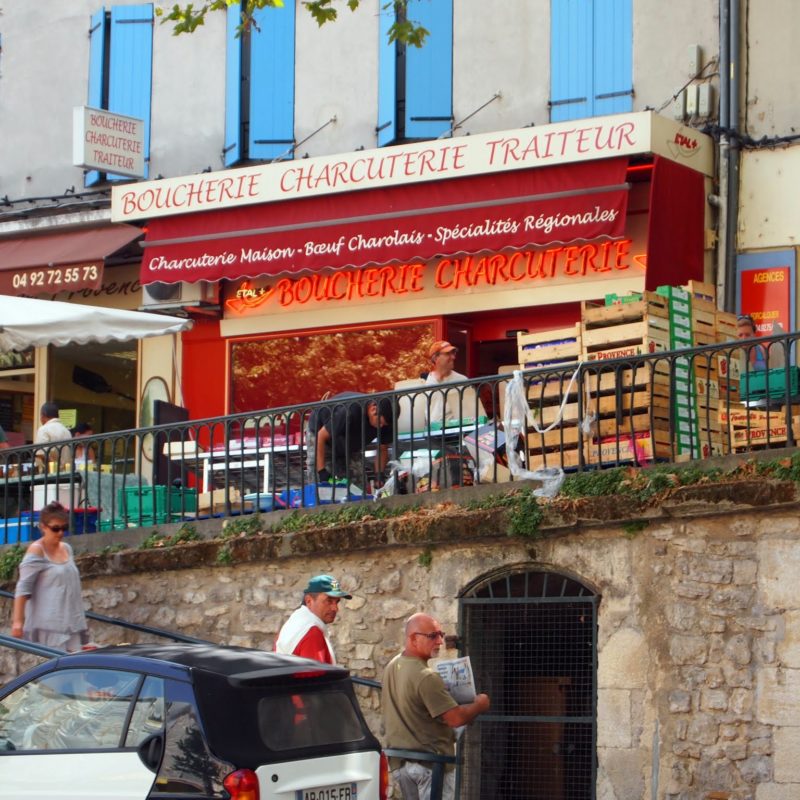 The lively market closes around 1:00 p.m. After a busy lunch—very hard to get a table any place good without a reservation—the town of nearly 5000 residents returns to its sleepy state.

After the market (or after lunch), if you aren’t toting too much and you wore those walking shoes, head up to the old citadel at the very top of a thickly wooded hill that overlooks the town. Built in the 10th century and destroyed in the early 17th century, the only remains are the ruins of one of the fourteen towers that originally stood atop the hill. The only the remnants of the Romanesque Church of St-Mari are the walls. The 19th century Chapel of Notre-Dame-de-Provence now occupies the top of the hill and houses a carillon of 16 bells that are played manually every Sunday morning. Rue St-Mari, the street leading up the hill, is lined with calades (stones placed on their sides) and dotted with shrines of the Way of the Cross. The view from the summit is stunning—on a clear day, you can see across the rooftops and lovely valleys to the Luberon Mountains and back to the Lure mountains.

We have not been to the Musée Municipal, where there are exhibits of Prehistoric and Gallo-Roman archeology, traditional Haute Provence costumes, and regional glass and pottery. Nor have we been to the 12th century Cordeliers Convent, one of the earliest Franciscan properties in Provence. Both sites have been on our list of stops for a while now, but the market always seems to dominate our trips. 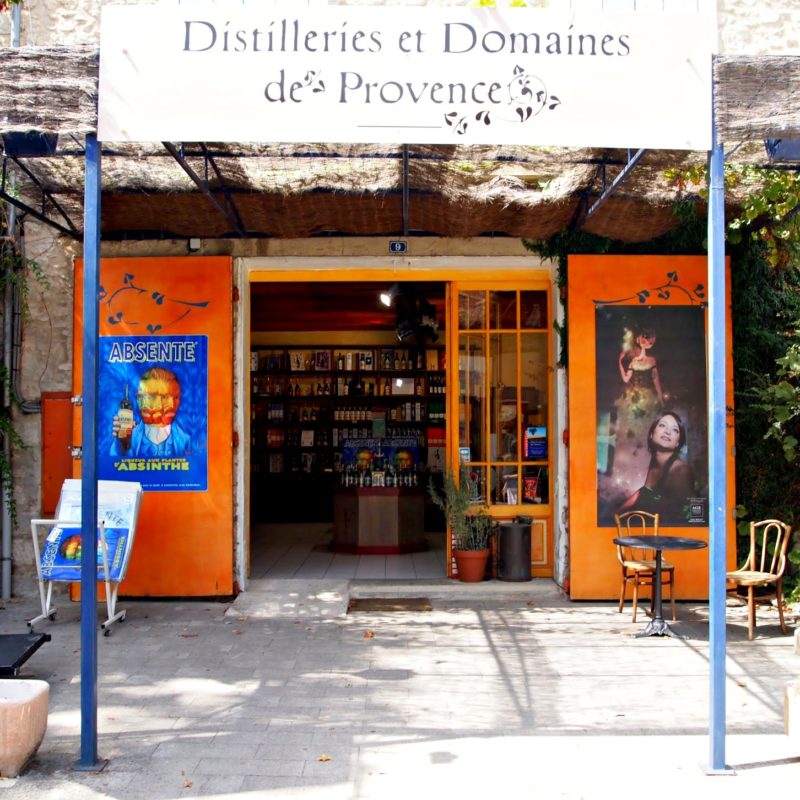 On our last trip, we did make a stop at the Distilleries et Domaines de Provence where tastes of absinthe and pastis await the curious visitor. If you have not tasted either, it is worth a stop. Our favorite pastis, Henri Bardouin, is sold there. 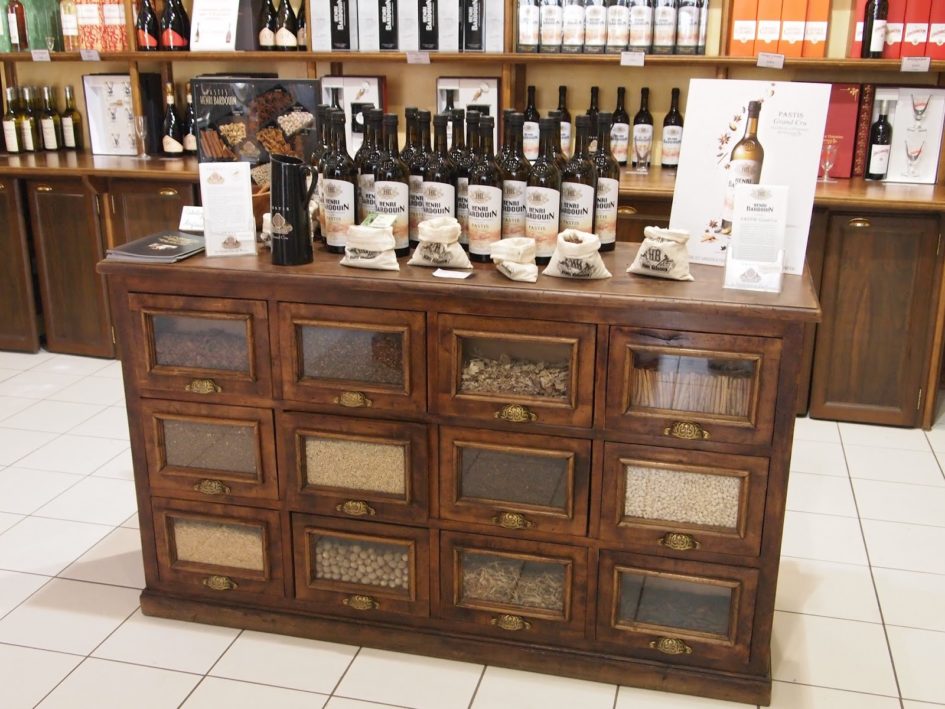 As we drive out of Forcalquier, I think of one of Jean Giono’s well-known quotes and smile:

It is just 3:00 in the afternoon and I feel we have achieved our goal with our visit to the Forcalquier market in Giono’s Provence. 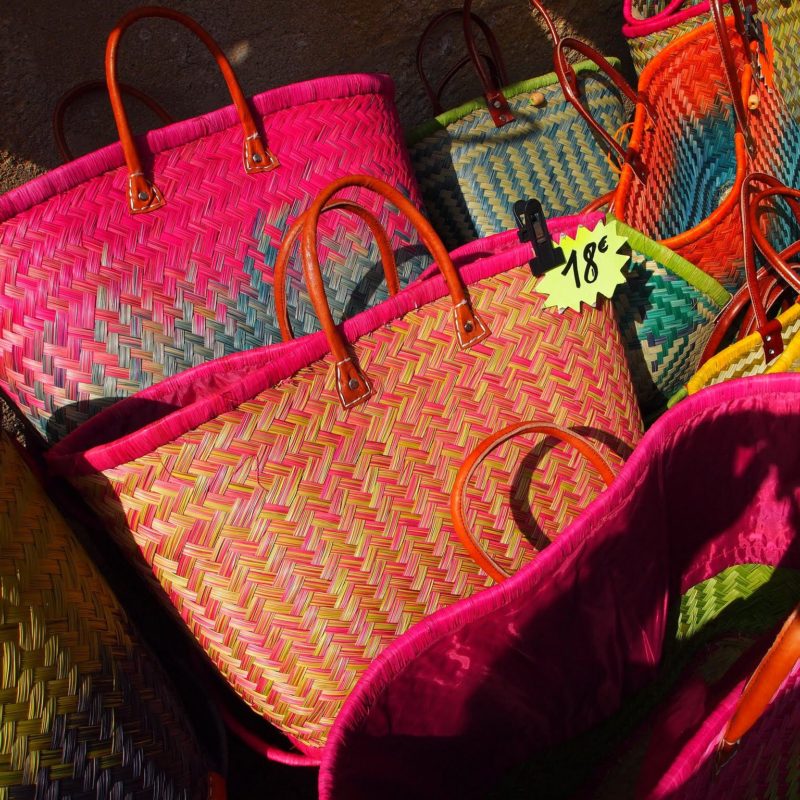