GARLIC IS IN THE AIR…IT MUST BE AÏOLI TIME! 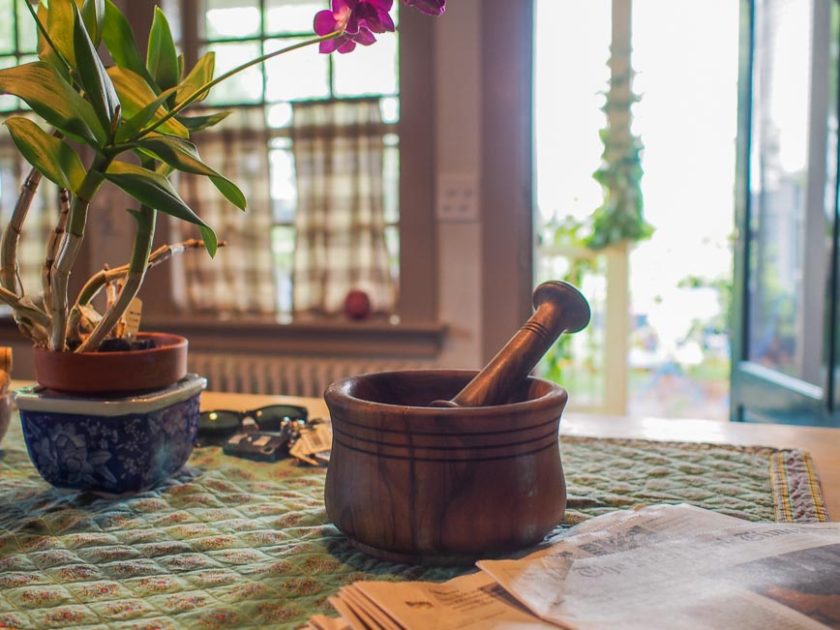 When the weather gets hot, our mortar and pestle becomes a fixture on the kitchen table. The familiar rhythmic sound of pestle-striking-mortar fills the air and the pungent aroma of garlic wafts through the house. Aïoli. It’s aïoli time.

The word, aïoli, comes from the French word for garlic–ail–and the Occitan word for oil—òli—the two primary ingredients in this deliciously simple Provençal dish. So ubiquitous is this sauce on tables in Provence that it is also known as “the butter of Provence.”

Aïoli is often a key ingredient in an array of appetizers or it can be found alongside a pork roast or fish, or as a dollop in soup. On Fridays, in predominantly Catholic France, a plat du jour called simply “Aïoli” is served in cafés so that customers may practice penance as imposed by the Catholic Church many years ago (and later lifted).  In Lourmarin, the small village in Provence where our family hangs our hats, Café Gaby has long served “Aïoli” on Fridays; it’s a lovely plate of par-boiled vegetables, cod, and aïoli.

Many of you reading this article may know aïoli as a mixture of garlic, olive oil, salt, egg yolks and lemon—essentially a garlic mayonnaise—but that is not the way they traditionally do it in Provence.

In a recent conversation in Lourmarin with Viktorija Todorovska, co-author of Provence Food and Wine: The Art of Living

, Todorovska told me that she learned about the Provence version of aïoli from François Millo with whom she wrote the aforementioned book. Millo, born and raised in Brignoles in Provence, explained that rather than using egg yolks, cooks in Provence substitute boiled potatoes.

“The egg version is referred to as the Parisian aïoli,” Viktorija elaborated, “and that’s not a compliment.”

Todorovska and Millo included Millo’s grandmother’s recipe in the cook book they collaborated on. My husband and I and dozens of guests who have passed through our kitchen in Portsmouth, New Hampshire and our various kitchens—some quite makeshift—in Provence can attest to the addictive pleasure of this version.

Todorovska, originally from Macedonia, told me that the first time she tasted Millo’s aïoli, she immediately liked it. “I was reminded of a dish my grandmother made in the summer, with dried red peppers similar to espelette,” she explained. “But it was pink,” she laughed.

The Provençal version, Todorovska pointed out, is more of a “poorman’s” version as eggs typically would be more expensive than potatoes. Beyond the economic advantage, however, is that the Provençal aïoli can be kept longer (refrigerated) and, without the animal fat of eggs, it is a perfect dish for abstinence of animal products on Fridays.

The first time Todorovska made Millo’s family recipe, she told me that she said to herself, “Now, I know why they use eggs.” Apparently, achieving a good consistency is much easier with egg yolks than boiled potatoes! It’s been so long since I’ve made it with yolks that I can’t weigh in on this subject but I can definitely report that it is a good workout with the mortar and pestle… But, a well-rewarded one!

At our table, we like cherry tomatoes, green beans, zucchini, carrots, artichokes, crusty bread and, upon the recommendation of Todorovska, have discovered we love fennel and hard boiled eggs. A more substantial aïoli table might include a simple poached white fish, roasted chicken, or pork roast.

Todorovska points out that it is a great party food. “You can enlist the guests to crush the garlic and work the ingredients into a paste while you do the rest of the cooking!”

Don’t fret about garlic breath—if everyone partakes, no one will notice anyone else’s garlic-tinged breath!

It is the ideal meal for the dog days of summer and its bounty of fresh vegetables. Chill the rosé—a perfect mate for aïoli—and get out your mortar and pestle!