CATCHING UP WITH THE PROVENCE GURU 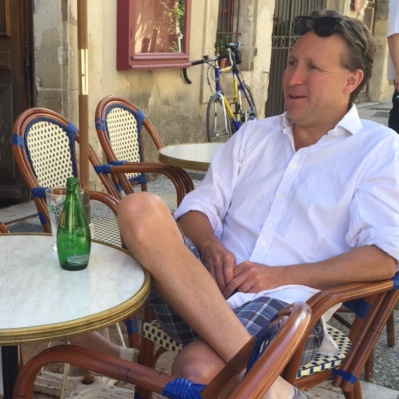 Those of you who travel to Provence or fancy a trip sometime soon–or who are lucky enough to live here–no doubt are acquainted with the Provence Guru. The Guru–aka, Jamie Ivey–and wife Tanya traded their London lives for adventures in Provence that spawned four books, a glossy magazine about Provence, a market stall where they sold rosé, a pop-up rosé bar, and a blog. I caught up with Ivey at Café Gaby in Lourmarin last week to find out what was keeping him busy these days. And, I got some scoop…read on!

Ivey–former London Commercial Attorney and current writer, blogger, husband and fully-engaged father of three young children–began his adventures in Provence a little over a decade ago when on a holiday in Provence that, naturally, entailed imbibing lots of the region’s famous pale rosé. It became a joke, he told me, to find the palest rosé, but a challenge he couldn’t shake even when vacation came to an end.

“I thought to myself that ‘searching for the palest rosé in France’ would make a great title for a book,” Ivey laughed.

Upon return to London, he sent off a proposal (on a whim, I think) to write a book about his quest for the palest rosé in Provence and a publisher agreed it was an idea worthy of a book. Of course, there was field research to do and the couple was off and running (and tasting). 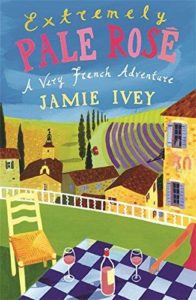 What a time to be writing about Provence rosé. On the eve of the pink revolution, the Iveys were in the thick of it. Extremely Pale Rosé: A Quest for the Palest Rosé in France was published in 2006, just two years after the Conseil Interprofessionnel des Vins de Provence (CIVP), the professional association of wineries and cooperatives was inaugurated. A year later, La Vie en Rosé was published. And, the next year came the third in the trio of rosé books, Rosé En Marché: Running a Market Stall in Provence. All of these books chronicled the couple’s adventures in the world of rosé; they are fun reads and as informative as they are humorous.

In the mean time, house-hunting and eventually building a house took on greater import as children began to arrive. A respite from publishing books found them publishing a glossy magazine, Blue Sky Living Provence, that I liked so much I still have a few copies (although the magazine stopped publication about four years ago).

Ivey’s fourth book emerged in 2012 (just after the magazine went the way of many other print publications around that time). The 2012 book focused on a subject other than rosé but one no less integral to Provence: the beloved truffe took center stage in Ten Trees and a Truffle Dog: Sniffing Out the Perfect Plot in Provence. I enjoyed this book, probably owing to my passion for truffles and never-ending hope that one of my dogs may learn the craft (an improbable occurrence in the state of New Hampshire).

Then came Provence Guru, an online magazine/blog that covers current events and tourist information as well as vacation rentals, real estate offerings, restaurant reviews, and, of course, wine and winery reviews. It’s one of my go-to places for news in the Luberon (and a little beyond).I had noticed a significant drop in postings recently and wondered what else might be keeping the Guru busy.

Last week I found out.  Ivey has just completed his fifth book and has ventured into a new genre. Entitled House Dad in Frogland, Ivey said, “A lot of me is in this one…me on a bad day.” 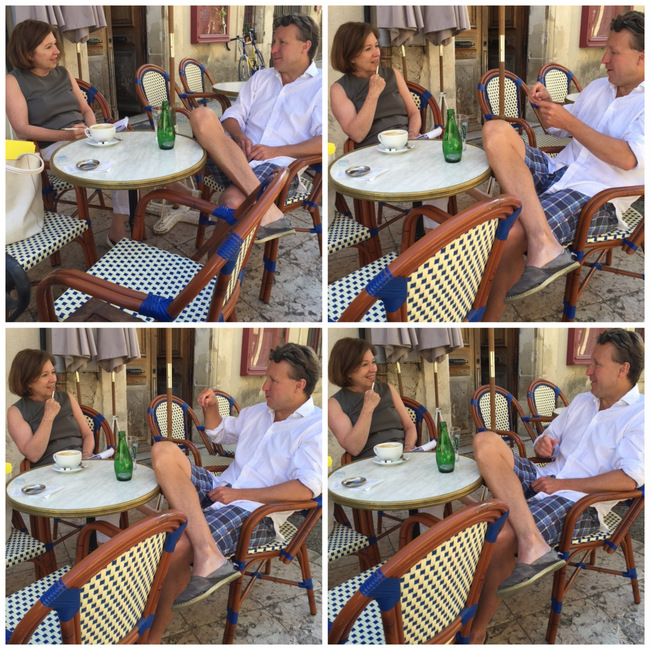 The book is “the nearly true story” of a British man who has been laid off from his job as a journalist for a “lad’s mag” (an British euphemism for a soft porn magazine) and, as a devoted family man, agrees to accompany his wife to the South of France where she will take a job as a nuclear physicist and he will take on the role as the “House Dad” for their three children. Already an original idea, Ivey casts the House Dad as “bitter-drinking, curry-eating, xenophobe,” among other qualities revealing the dad’s antipathy toward the French. In his effort to overcome his prejudices, he stretches his comfort zone and inadvertently finds himself in the midst of some apparent sexual trysts. Whether these rendezvouses are figments of his over-active imagination (remember his former career) or founded on some basis of reality (due to his quintessentially British utter lack of understanding of French women) remains unclear, as I understand the story. But the awkward encounters of one British man in Gaul sound very funny.

Ivey went on to sum up that the book centers on two main themes: 1) French women and their attitudes about sex and 2) how the French raise their children, including (especially) what they feed them, generally regarded by the French, he said, as being far superior to all that British parents do. Ivey did confirm that much of the material for the second theme comes from his children’s experiences (do we really have to eat cow’s tongue?) but didn’t reveal how much he draws upon his own experiences for the first theme. Hmmmm.

“I’m very happy to be finished,” Ivey confessed. “I’m obsessed when I am writing,” he said. “I’m very relaxed now,” he added, smiling broadly and laughing.

With fingers crossed as the manuscript makes the rounds of publishing houses, Ivey is sure to be back more regularly to his desk as Provence Guru.  I’m looking forward to reading his blog as we wait for House Dad in Frogland.

Print
2016-07-02
Previous Post: ESCAPE THE GLITZ OF CANNES WITH A VISIT TO ÎLE SAINT HONORAT
Next Post: MARC CHAGALL AT THE CARRIÈRES DE LUMIÈRES: EXTRAORDINARY