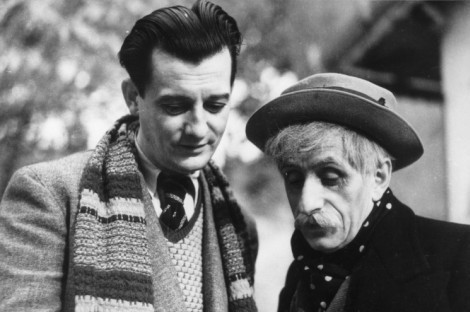 The Academy Awards, which I look forward to each year, will be telecast Sunday evening, February 28, and this presents me with a confliction, for February 28 is also the birth date of legendary French filmmaker Marcel Pagnol. Seven years ago, on his anniversary, we had a party in his honor at our home with a group of French friends, all admirers of his work. (Could there be a Frenchman who is not?) 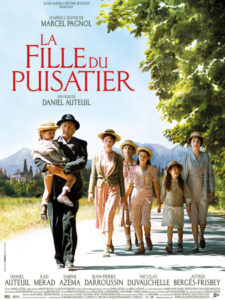 Since then, each year on this date, we watch one of his films following dinner. Usually we select Manon des Sources (1986) though last year because Daniel Auteuil took it upon himself to reprise some of Pagnol’s work, we chose La Fille du Puisatier (2011), and look forward to soon getting our hands on his Marius (2013) and Fanny (2013).

This is not to suggest that I worship exclusively at the altar of Pagnol. Movie appreciation is in my blood, as I came along at a time when the cinema was the principal form of entertainment in America. In my youth, 60 million people flocked to a movie theater each week to see the current offerings from Hollywood, and this enormous appetite was filled by the over 700 films Hollywood turned out each year. The stable of actors, working under very controlling exclusive seven-year studio contracts, typically appeared in multiple productions annually.

Surprisingly, I can remember many of the films I watched while I was still in grade school, and I saw a lot, be it comedy, fantasy, westerns, or historical drama. (Was there ever a more beautiful woman in armor than Ingrid Bergman as Joan of Arc?) Today quite a few films sit on my shelves in DVD format. How great is that, eh? Well, it’s better than the film only being a memory.

Home projection can never replace the first viewing on the big silver screen in a darkened cinema. You are not certain what is coming, and wham, you are pulled in—or not—by what is up there. I think you know what I mean. When the magic is revealed, it brings broad smiles, laughs, tears, or just momentary awe.

How about in Cinema Paradiso (1989) when Jacques Perrin finds the film can of projectionist Philippe Noiret and plays it to reveal all the kissing scenes the local catholic priest had censored. Or the moment in Jerry McGuire (1996) when Renee Zellweger, standing in front of her girlfriends, listens to a gently pleading Tom Cruise attempt re-awaken their love, and then stops him with the simple “Shut up, you had me at hello.”

Surely among the greatest challenges for a director is to get the ending of the film right. I offer up two that remain embedded in my mind. Louis Malle’s Damage (1992) where Jeremy Irons, disgraced British Cabinet Minister, self-exiled following the death of his son, returns to his room from a cheese shop, which is in a village that for me sits somewhere in the south of France. My most memorable film ending was more of a “spectator experience”. It was in a full theatre on Second Avenue near Bloomingdale’s, when, upon the ending of Peter Weir’s Gallipoli (1999), the crowd sat motionless and silent for several minutes. Total silence. It is moments like these that sustain my faith that big screen movies will somehow survive in the age of cable, streaming, and the like. 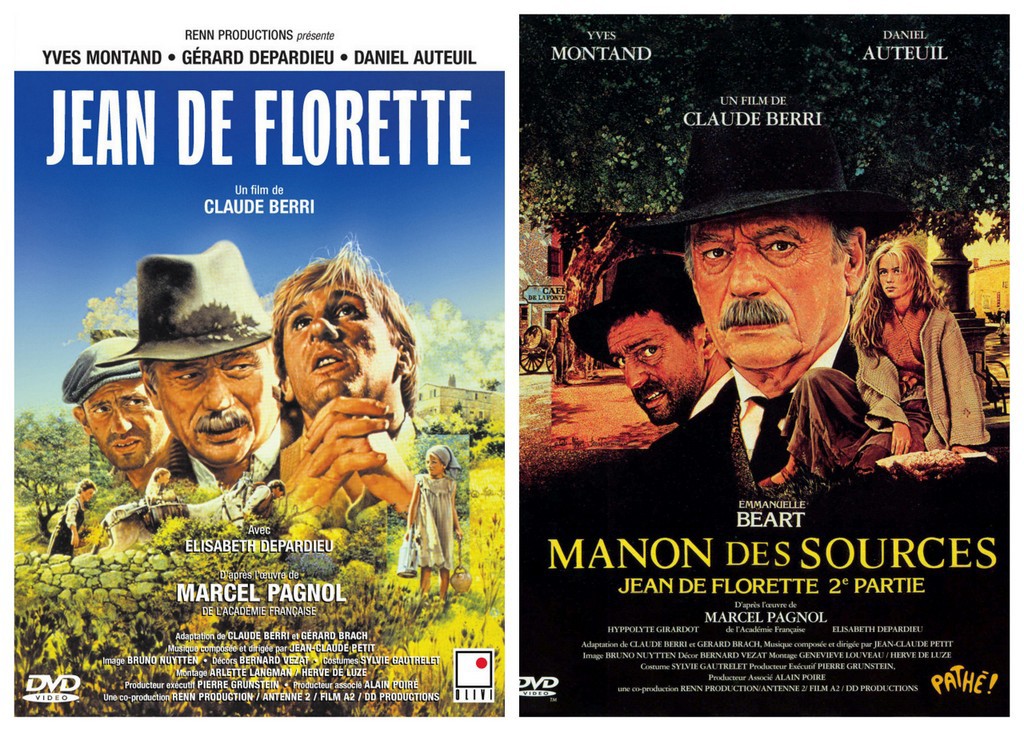 Returning to Pagnol, let me declare that a scene in Manon des Sources is at the top of all the special cinematic moments I treasure. For anyone who has yet to see the film, (which must not be viewed out of sequence from the first story, that of Jean De Florette), I will not spoil it for you here. Those who have seen the film will know the scene I speak of. It happens near the end in a dialog between Yves Montand and the old blind woman. For me, the scene is heart wrenching, exposing the angst of a way of life that could be drawn stylistically from any small village in the world, but for Pagnol, it was taken from his surroundings, his Provence. Environment in youth affects us all, but so few have the ability to portray its influence as poignantly as did Pagnol. It shaped him, and he projected what he saw and felt to the world, first on stage, then in film, and lastly in his memoirs. Daniel Auteuil sums it up succinctly when he states, “Pagnol gave Provence its identity.”

Marcel Pagnol was born on February 28, 1895 in Aubagne, now a small city just northeast of Marseilles, and spent most of his life in his native Midi. He died in 1974. After university studies in Aix-en-Provence, he became a professor of English, the field in which he had majored. An infirmity kept him out of the army, leading him to begin teaching English in the south in 1916, and then in Paris beginning in 1922.

Pagnol’s passion was writing, however, and, in 1925, he co-authored with Paul Nivoix his first play, Les Marchands de Gloire. This was followed by Jazz (1926), Topaze (1928), and Marius (1929). The last one took him into very familiar territory, as its setting is the old port area of Marseilles where both comically and melodramatically the daily trials and tribulations of several inhabitants are depicted. 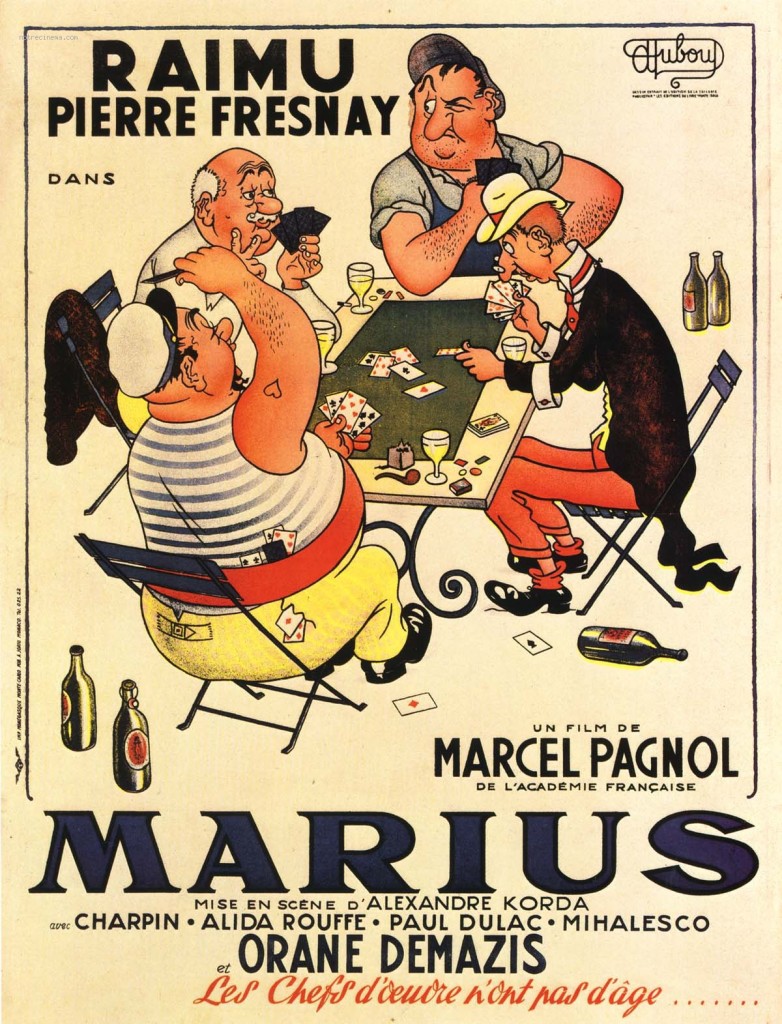 It was the advent of sound in film that swung Pagnol beyond writing into film direction; in 1931, he created his own production company, Les Films de Marcel Pagnol, and located it near Marseilles. Setting up this new venture in Marseilles was a giant departure from the norm since Paris was seen as “the” cultural center of France.  At that time, there were only two film studios in France, both of which were in Paris. By the time it closed in 1954, Pagnol’s company had produced nineteen films, the majority of which he wrote the screenplays for, either from his original stage material or secondary sources, and also directed.

“Le Schpountz” unfolds casually, garrulously, in a series of gently comic sequences in which the dialogue rolls on nonstop. Pagnol made movies with a radio producer’s abhorrence of dead air time.”

The entire film of Le Schpountz can be found on YouTube, but if you don’t have an extra two hours, I highly recommend the six-minute YouTube clip (above). The principal character, portrayed by legendary Marseilles-born actor Fernandel, is interviewed by a film company located in the countryside. In a succinct two minutes time, he gives a master class performance portraying each of the five emotions asked of him by the crew, always repeating the same phrase from the French Civil Code, “Those sentenced to death will lose their heads.” Why does Fernandel offer that up, rather than a line of poetry as proposed by the crew? Likely it’s a barb, by Pagnol, directed at the French penal system. The guillotine was the sole instrument of death in France until its use was abolished in 1977. 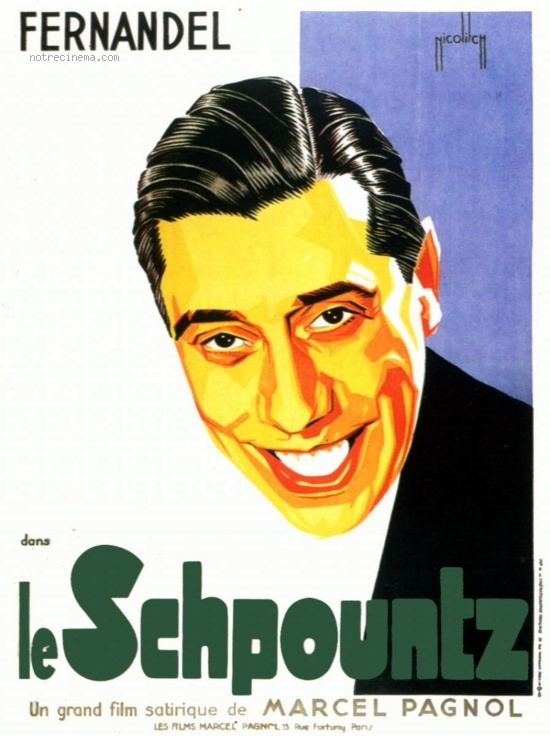 If you are in France this spring, between April 30 and June 12, you can take in a stage performance of Le Schpountz in the village of Allauch (near Marseilles). 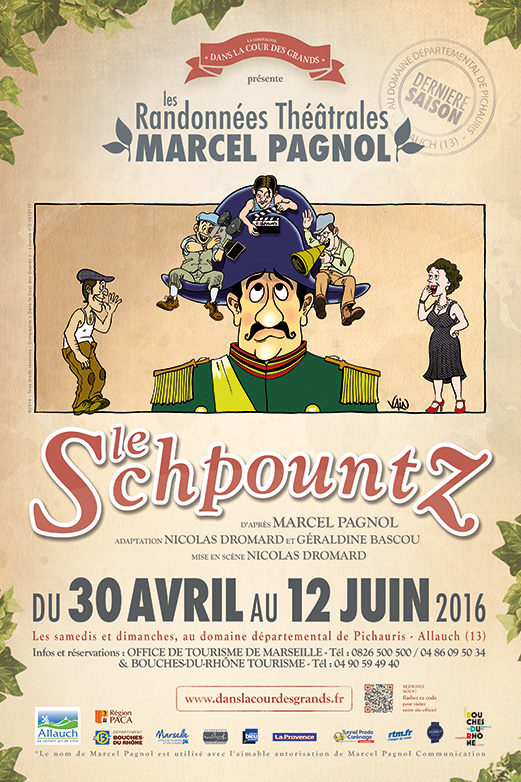 Even with all his film success, Pagnol did not desert the stage entirely, as he continued translating pieces by Shakespeare and Virgil for the theatre. His Hamlet is still produced in France, possibly because he seems to have cloaked the prince with an effeminate nature. Yet despite his significant body of work in the theatre beginning in the 1920s, in 1946 he was tapped as a member of the Académie Française, the first person coming into this pantheon of French language as a filmmaker.

He garnered the award for “Best Foreign Film” from New York Film Critics Circle on three occasions: In 1939, for Regain; in 1940 for La Femme du Boulanger; in 1950 for Jofroi. However, his recognition here in America during his lifetime was very limited. Broadway give us a musical Fanny in 1957, and Hollywood followed in 1961 with a dramatic version of Fanny pairing Leslie Caron with Maurice Chevalier who were already recognized for their roles in Gigi (1958), a film based on Sidonie-Gabrielle Colette’s story. Gigi is well remembered, while Fanny, nominated for 5 Academy Awards that year including Best Motion Picture, is all but forgotten.

The full and proper effect of this master storyteller in America had to wait until 1986 and Claude Berri’s deconstruction of Pagnol’s book, L’Eau Des Collines, into two modern film classics: Jean De Florette and Manon des Sources. More recently, with Auteuil’s aforementioned recent work, we have three Pagnol films to enjoy anew. 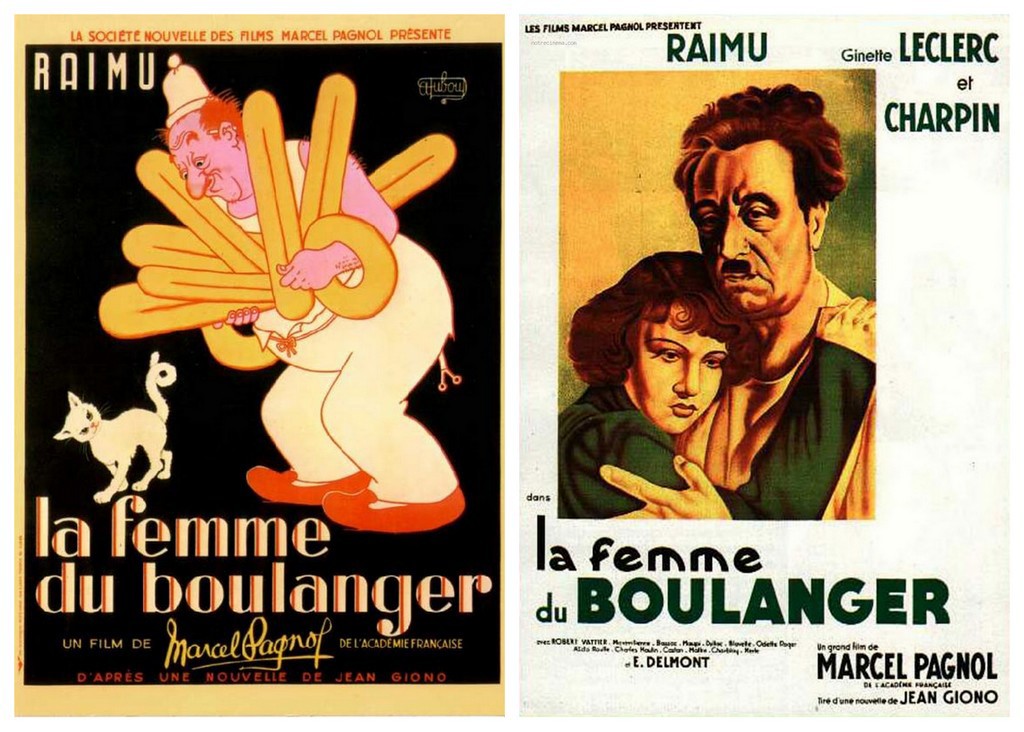 Alas, for me it will be most satisfying when someone, perhaps Auteuil, releases a rendition of La Femme du Boulanger. I long for the closing scene when the forlorn baker’s unfaithful wife returns, to the salvation not only of him, but the entire village. That moment is as well fixed in French consciousness as Washington crossing the Delaware is to us.

A few of the aforementioned movie titles have different names when translated into English versions:

Print
2016-02-27
Previous Post: MY OAK TREE GROWS IN THE LUBERON
Next Post: MAPPING THE MARKETS OF PETER MAYLE’S PROVENCE