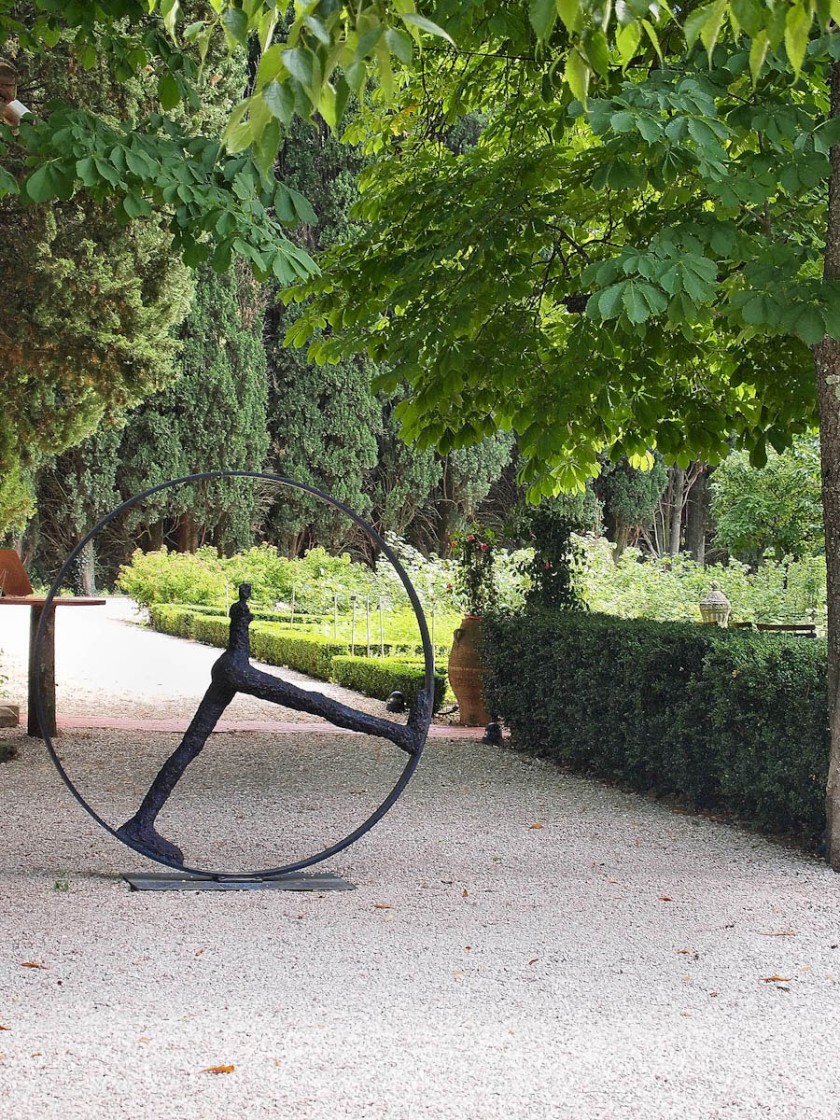 Whiling away the afternoon

As I wrote above, the Hostellerie de l’Abbaye de la Celle is located in the center of the Provence wine region and in the heart of what has come to be known as Green Provence. It is a great base for visiting estates to taste wine and for actively exploring the natural beauty of the area. (Ask the hotel staff to assist you with these excursions–they’ll even prepare a picnic for you!)
The Hostellerie de l’Abbaye de la Celle is also a destination itself.  We could have strolled around the grounds (and looked for the vineyard conservatory where 88 varieties of grapes are planted,or the five fountains, or the chef’s garden, for example), taken a swim, or arranged a massage. There are tennis courts, a golf course, and a boules court not far away. For us,  reveling in the property’s “history and serenity” was our goal for the afternoon.
L’Abbaye de la Celle
The adjacent  Benedictine Abbaye de la Celle, dating from the 11th-century, was our first stop. We were accompanied by the tour director of the abbey, Chantal Doerr, who was a wealth of interesting information from whom we learned a lot (in English).
The abbey was a women’s monastery with roots dating back to the 11th century when a monastery was first built in the same place,** also exclusively for nuns. Next to this women’s monastery was one for men (because, of course, the nuns needed the monks to say mass and administer the sacraments). The original building was destroyed in the early 12th century and replaced with the current abbey.
Around 1225, Garsende de Sabran, a powerful woman who was Countess of Provence and Countess of Forcalquier, came to live in the monastery. Her arrival propelled young women from other aristocratic families to join the monastery —some by choice and some at the persuasion of their families in order to avoid the large dowries entailed in marriages in the middle ages—and donations swelled. The monastery became quite famous during this time and by 1267, La Celle was home to 100 nuns.
Apparently, fame turned to infamy for the monastery as the years passed–a small number of nuns were accused of grievously disobeying the Benedictine rules.  In 1660, the abbey was shut down, leaving around 24 nuns to fend for themselves. Although supported by the villagers, they could not sustain the buildings, which gradually deteriorated. A little over a hundred years later, during the Revolution, the building is sold to a private farmer and in 1816, the monastery’s church is made the parish church of La Celle but condition of other parts of the property continue to decline. In 1886, the abbey is classified as a historic monument.
In 1938, Sylvia Fournier, who owned among other things, the Porquerolles Islands, purchased the property and before long, the Hostellerie is brought to life.  It must have been quite nice because General de Gaulle visited the property three times. Unfortunately, when Fournier dies in 1971, the hotel was not cared for until 1990 when the Conseil Général of the Var bought the entire complex—the Hostellerie, the abbey, and the building which now houses the Maison des Vins—and begins to restore it. In 1999, Alain Ducasse took over the Hostellerie and in 2011, he began renovations to bring it back to a boutique hotel.
Maison des Vins

Our next stop was the Maison des Vins, located on the other side of the Hostellerie.  There, we met Philippe Breban, Director of Syndicat Coteaux Varois en Provence and the Maison des Vins, and Rachel Renault who served as a translator.
It was just over twenty years ago that the Coteaux Varois en Provence appellation was created and those winemakers joined together to create this Maison des Vins. Since then, growth has been tremendous, particularly for rosé. For example, in 1993, there were around 60,000 hectares of rosé and in 2013, there were 110,000 hectares devoted to grapes for rosé production.
The day that we visited, there were about 67 different rosés in stock, according to Breban, and there were still others coming in that had not been bottled yet. This is a great place to get an introduction to the local wines!
I asked Breban about his thoughts as to why the demand for rosé has increased so much.
The reasons are multi-faceted, he believes, and include factors related to viticulture and vinification such as planting grapes (to be used for rosé) that are better adapted to the soil and improved production technology (e.g., introducing pneumatic presses and procedures that enable better control of temperature) as well as socio-cultural factors such as rosé now more likely to be served year-round; rosé being served as an apéritif; more men and more young people drinking rosé; and tougher drunk driving laws encouraging people to switch from hard alcohol to wine.
As for what trends Breban has observed in recent years, it would clearly be an increase in “bio” wines (those made from organically grown grapes). He said that about 20% of the land in Coteaux Varois is bio and one-third to one-half of production is bio. Some of the smaller estates, he said, are not technically bio because they have not yet completed the paperwork.
Finally, Breban reminded us that while the majority of production is rosé, there are some excellent reds and whites are overlooked.

Vineyard tours. There are many wine estates in the area surround the Hostellerie. Hotel staff are happy to arrange visits and transportation for you.  They made arrangements for Pam and me to visit Château Margüi, a completely bio winery that produces all three colors of wine as well as olive oil. The  from this estate have been some of my favorites for several years, so I was thrilled to make this visit and meet the proprietor, Marie Baylet-Guillanton, and to taste her excellent whites and reds, too.

Finally, we visited the boutique, housed in an ancient chapel near the terrace.  There, I focused on the  culinary specialties like honey, risotto, pasta, and olive oil as well as cookbooks and those cool night shirts I mentioned earlier.  I bought a very large soft canvas bag—as if I needed a bigger bag—with loads of pockets.

It was time to pack up that bag—and all the others as well as our boxes and baskets—to return to Lourmarin.  I felt refreshed—and a lot less Clampett-like—after just 24 hours at Hostellerie de l’Abbaye de la Celle.  After lapping up the enormous amount of history, serenity, and good food and wine this destination has to offer—not to mention just plain fun—we have a wealth of memories.  It was “24 hours” that would keep on giving!

Notes:
*There are several Prix Fixe lunch possibilities (available Monday through Friday) that come from the “Menu du Marché” (“Menu from the Market”). The 38€ menu includes a first course (entrée) and a main course (plat) or a main course and a dessert. This menu, also referred to as a “business lunch,” was created to appeal to those who may be in a hurry but still want to receive a perfect meal and service—this menu is usually exactly what I am usually looking for and seemed a remarkably modest price for a restaurant of this caliber. The 48€ menu includes the first course, main course, and dessert. There is also a 65€ menu that includes matching foods and wines with the first course and main course (accord mets & vins) followed by dessert. Finally, there are two other Prix Fixe menus:  Menu de Saison  and Menu de l’Abbaye (for 70€ and 95€, respectively).  À la carte is always an option.

**Like many parts of Provence, the Romans inhabited the area earlier and excavating some of the ruins of a Roman villa under the abbey are part of the current restoration project. The Hostellerie itself, formerly a priory, was built in the 18th century and is also said to stand atop part of the Roman villa and the swimming pool, about 100 yards from the hotel, is thought to rest atop other Roman ruins so plans are in place to move the pool in order to excavate that area.

Full disclosure probably demands that I tell you that the costs associated with the hotel room were absorbed by the Comité Régional du Tourisme and the Comité Interprofessionnel des Vins de Provence (CIVP)  as part of a package I won at a wine tasting, “Provence in the City,” hosted by Wines of Provence (Vins de Provence). I was, however, under no obligation to write about my experiences.  (Lunch and dinner were on my tab!)

Un gran merci to Pamela O’Neill for her photography and to both O’Neill and David Scott Allen for their editorial assistance.

Print
2014-07-20
Previous Post: EYGALIÉRES IS AMONG MY TEN FAVORITE PROVENCE MARKETS
Next Post: LA TOUR-D’AIGUES’ MARKET: A SMALL MARKET WITH A BIG BACKDROP