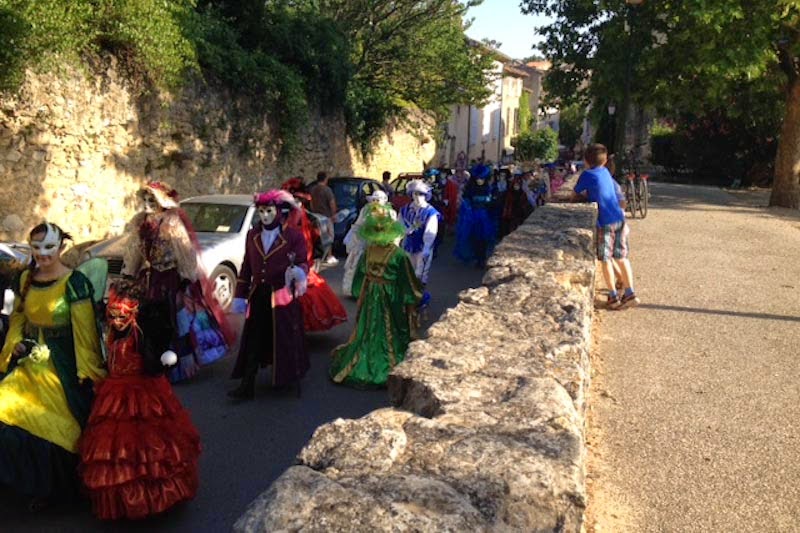 The great part of staying in a maison village–home in the village–is that you are in the thick of things. The downside is that you are in the thick of things. Such is the case for good friend Pamela and me tonight, the first day of summer, June 21. In France–and in over 100 other countries around the world–the summer solstice is celebrated with a Fête de la Musique.
We can hear the music from our living room in Lourmarin, as if the band were practicing in the neighboring home. It’s pretty loud and gives no hint that it will be stopping anytime soon. It’s well after midnight. We’ve just finished dinner–everything runs late in the long hot days of summer in Provence–and walk down Rue du Grand Pré from Le Nid des Hirondelles to Place de l’Ormeau where all the action is.
Earlier in the evening, Pam and I were in the village and saw that Rue Henri de Savornin, the main road that traverses the village, was filled with the tables and chairs from each of the four restaurants that line the street at Place l’Ormeau. People were beginning to take their tables to enjoy the music.
Unlike the typical music festival, the Nationale Fête de la Musique is free. The musicians perform for free and all the concerts are free. The goal of the day, as envisioned by the French Ministry of Culture in 1982, is to bring people of all ages and social backgrounds together to enjoy the longest day of the year (in the northern hemisphere). All genres of music are welcome–rap to classical–and venues range from outdoor public squares to châteaux and train stations and even hospitals and prisons. Performers include professionals as well as amateurs and young students.
At the other end of the village, in Place Henri-Barthélémy, people had already taken their seats, waiting for the parade of Journées Vénitiennes. Mayor Blaise Diagne, per usual, was in the thick of things, carrying tall stacks of chairs to accommodate the overflowing crowd and even dashing into the local Casino (store) to purchase toilet paper to restock the public bathroom. 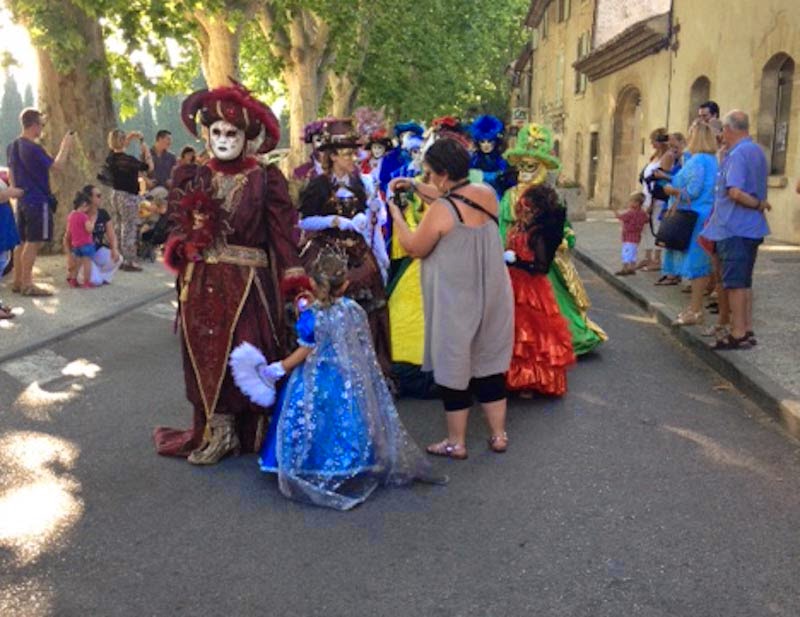 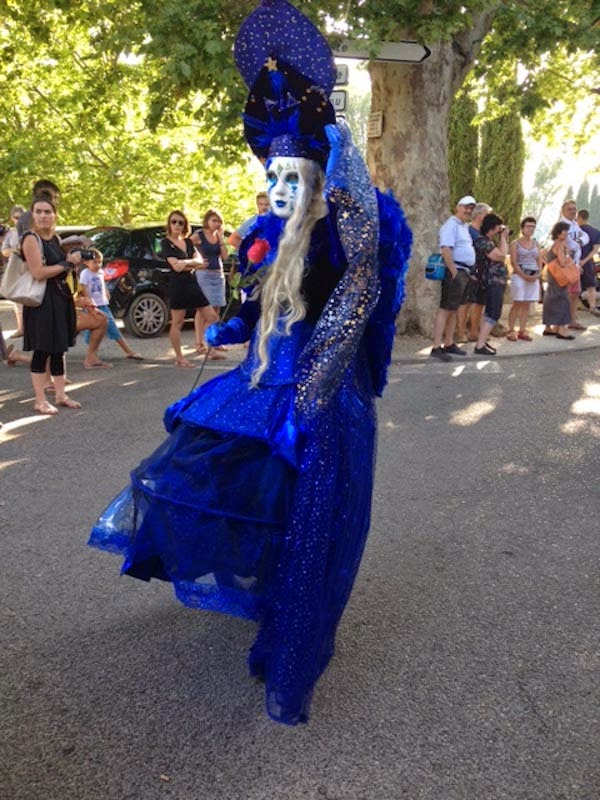 The Journées Vénitiennes are visiting village fêtes throughout the summer. They are a group of about 60 people who seem to be all ages, although it was hard to tell because they wore elaborate costumes and beautiful masks. Among the Venitian carnival characters that walked past us, many stopping to pose for the cameras, we recognized Pinnochio and Geppetto and Mary and her lamb. 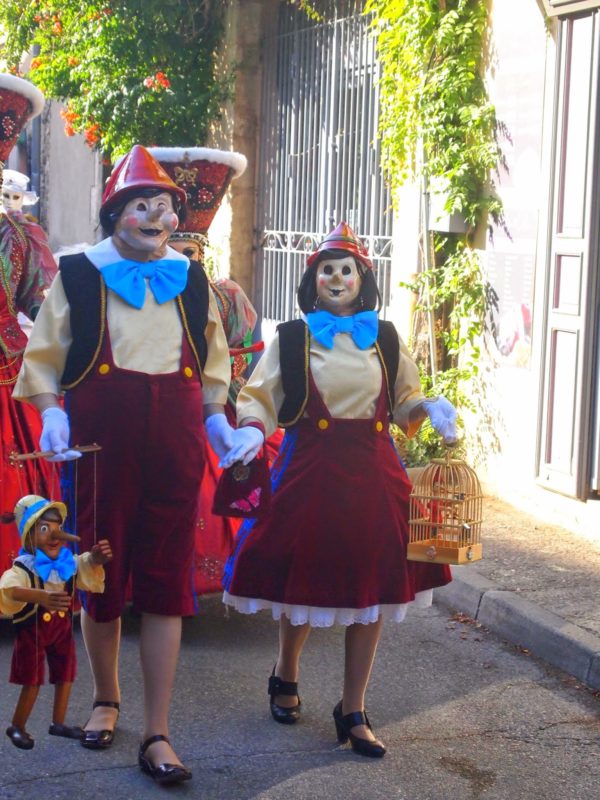 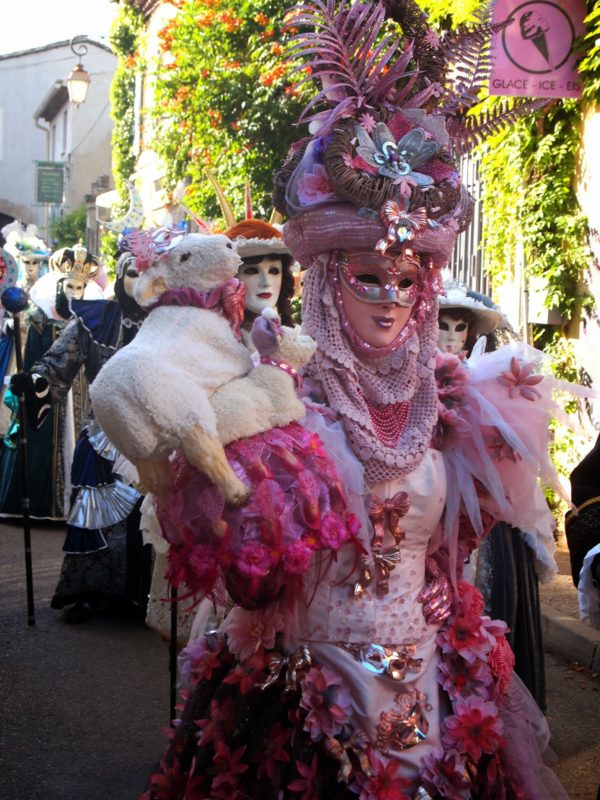 After the parade, an acoustic guitarist was scheduled to take the stage at the Place Henri-Barthélémy locale, followed by an electric guitarist and, finally, a DJ.
Meanwhile, at the Place du Temple, there was more music. Les Filles de l’Air was scheduled for 7:00, too.
As I wrote above, we enjoyed dinner back at the maison village where we are staying. We took our aperitifs on the terrace where there’s an inviting view of Lourmarin’s tile roof tops–okay, there are a lot of satellite dishes, too–with the Luberon mountains in the distance. The sun was shining brightly and warmly; the lighting was lovely; and the local rosés quenched our thirst. We could hear the music in the distance.
By the time we wandered down to Place l’Ormeau and took a table at Café Gaby, there was dancing in the street. No band, just loud recorded music, but it didn’t seem to matter to anyone. I guess we missed the DJ with the “Elvis Presley theme” music (that I had read about somewhere).
We watched as the tables and chairs were stacked and carried away, marking the end of another Nationale Fête de la Musique in Lourmarin and all around France. There will be another one next year on June 21st. 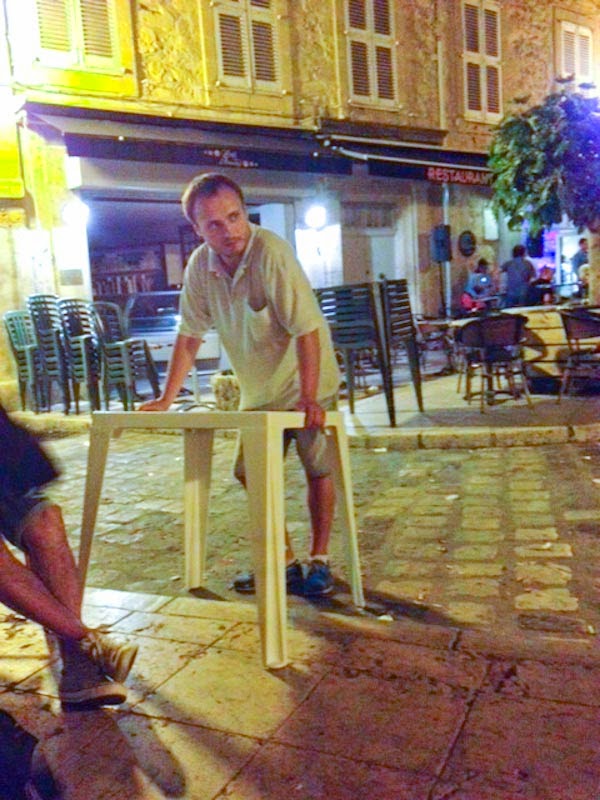 Print
2014-06-22
Previous Post: THERE’S MORE THAN ONE D-DAY
Next Post: SAFFRON: THE OTHER FIELD OF PURPLE IN PROVENCE