WHAT ARE ALL THOSE FRENCH CHILDREN DOING UNDER THE TABLE? 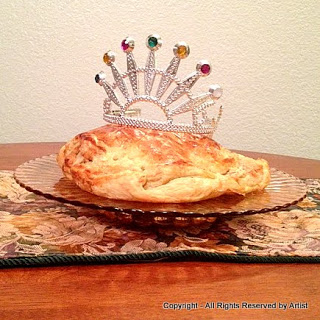 All across France today, on January 6th, parents are asking the youngest member of the family to sit under the table as dessert is being served. Pourquoi? Because it is the Day of the Epiphany and the Galette des Rois (the Cake of Kings) is being served.

In France, the Day of the Epiphany–the end of the Twelve Days of Christmas–marks the day that the Three Kings brought their gifts of gold, frankincense, and myrrh to the manger in Bethlehem where the little Lord Jesus was asleep on the hay.

The word epiphany comes from the Greek word epiphaneia which means “manifestation or striking appearance,” and, in Western Christian churches, came to name the day that commemorates when the Three Wise Men observation of the revelation of God in the form of a human being, Jesus Christ. Once more religiously significant than Christmas, today its observance (outside of some acknowledgement in church services) is largely confined to European countries, especially France, Italy, and Spain.

In France, not surprisingly, the celebration takes place around–and, well, under–the table and it centers around the Galette des Rois. This cake–actually cakes as there are regional variations–holds in it the prospect that someone at the table may become king or queen for the night. Somewhere inside the cake is tucked a trinket that determines who shall wear the crown. If you are lucky enough to be served the piece with the trinket, you will be the subject of the family coronation. (What benefits may come with this elevated status depend on those sitting around the table.)

The cake is traditionally sliced into enough pieces for each person to have one, plus an extra piece, referred to variously as part du Bon Dieu (God’s piece), part de la Vierge (the Virgin Mary’ s piece), or part du pauvres (the poor man’s piece). The idea, of course, is for someone to be crowned–if your dinner party is small, this presents the obvious disappointment that your table may not have a king (or queen).

Back to the child under the table, his or her task is to designate who will receive each piece, thus eliminating the possibility of an ignoble accession to power.

Our daughter happened to be the youngest guest at the first Epiphany celebration to which we were invited. We were traveling from Paris to Lourmarin in 2001 and stopped in Badecon-le-Pin to visit the family of a young man who had spent several weeks in our home the previous summer. This family had a real “Fête des Rois” that culminated in what was, to us at the time, a curious way to serve dessert. But, we quickly fell in love with the custom–and the galettes–and have made our own cakes many times since then. 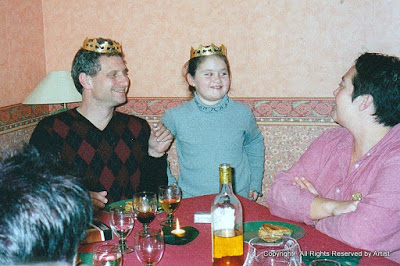 The family we visited also has a lovely collection of trinkets from previous Galettes des Rois (in which the figurine stayed in the family). Tiny porcelain figures of baby Jesus and Mary, as you might expect, but also of cartoon characters such as Astrix and Obelix and Pepe-le-Pew. The original “prize,” dating back hundreds of years, was a fava bean, lending its name, fève, to any trinket that might be hidden in the cake. (We used a very shiny penny, sterilized and wrapped in foil, in this year’s cake.)

The most widely served Galette des Rois is the… Parisian version made with puff pastry and filled with almond frangipane. In Provence, the cake is made with a brioche dough, often flavored with orange-flower water and usually filled (or decorated) with candied fruit. While I like the Provence version, I love the light puff pastry filled with a luscious almond cream.

If you are in France, the galettes are widely available before and after the Epiphany.

This year, I am in Southern California with my family. No galettes in Carlsbad, California. At one of the local bakeries in town–one that calls itself French–the person behind the counter told me that I would have to come back at Easter “because that’s when the Epiphany is celebrated,” (leading me to conclude I might never come back).

So I made the galette. They are easy to make. A package of puff pastry, ground almonds, sugar, butter, vanilla, and eggs– and a trinket–are about all you need. 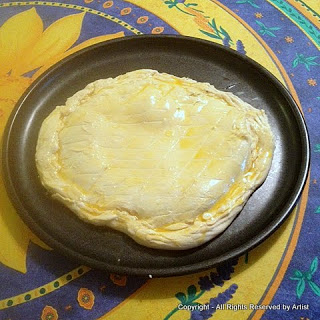 My galette didn’t resemble those I’ve seen in the patisseries in France–in fact, as I looked at the odd shaped blob of pastry resting on my mother’s pink depression glass platter, it made me think of the turkey we spatchcocked, a la Martha Stewart, this past Thanksgiving.  But, I reminded myself, that was the best turkey we’ve ever had. 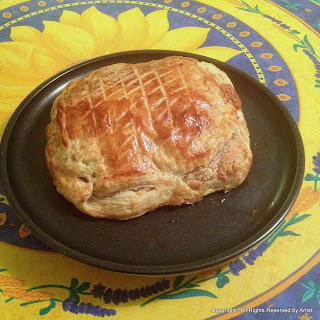 The cake was delicious, fortunately, because, for the sake of the blog, it was incumbent on the four of us to eat nearly the whole galette before the trinket was found. After all, how could I post an article about the Galette des Rois if there were no King or Queen? How could I have asked my sister-in-law to crawl under the table for no reason? 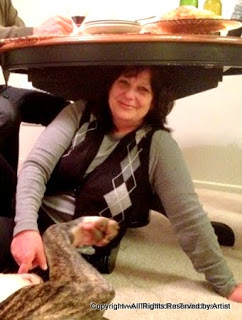 My mother was the lucky one to find the shiny penny wrapped in foil. She wore the crown proudly. As the residential monarch, she didn’t wield her power as she could have but seemed quite content with her elevated status. 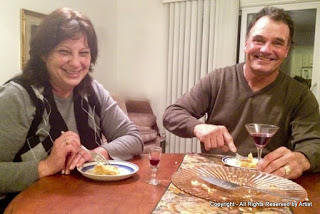 We retold the story of the Three Wise Men, “The Gift of the Magi,” and the meaning of the Epiphany. It may seem like a silly custom to serve a cake with a hidden charm that determines who will be King or Queen for the evening, but, like most traditions, it provoked laughter as well as some conversations we undoubtedly would not have had.

There is still time to make the galette and find a crown! 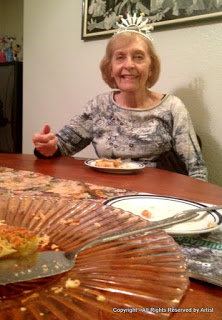