4 DECEMBER STARTS CHRISTMAS SEASON IN PROVENCE: PLANT YOUR WHEAT SEEDS AND GET OUT YOUR SANTONS! 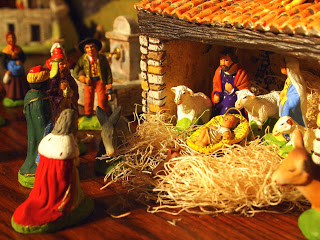 Department stores in the United States ring in the Christmas season the day after Halloween—with the possible exception of those states that mark the Day of the Dead—and the rest of us fall into place when we toss out the turkey carcass at the end of November, depending on where Thanksgiving lands.
In Provence, December 4th marks the start of the Christmas season.  It’s a long season—we all know the French like their holidays and I say that in the most commendable even covetous manner.  But, the holiday season does span over eight weeks, ending on February 2 with Candlemas (or Chandeleur)!
December 4th—today!—is the Feast of Saint Barbara (Sainte Barbe).  It’s a busy day for those who live in Provence and wish to celebrate the season (or at least carry on the tradition!).  Most people we know participate in some way and I feel fortunate to have been included in some wonderful expressions of these traditions.
But, first, who is Sainte Barbe? Yes, she is the patron saint of one of my favorite cities in my native California, christened Santa Barbara in 1602 by Spanish explorer Sebastian Vizcaino after making his way ashore during—note this—a violent electrical storm on December 3, the eve of the day of her feast. In 1786, Father Junipero Serra dedicated his mission—note that it is the best-preserved of the California Missions—to Saint Barbara on the day of her feast.  But, I digress…. 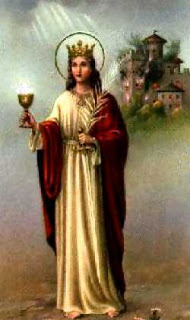 Saint Barbara, daughter of a wealthy pagan, lived in what is now Turkey in the third century.  At that time, that area was called Nicomedia and was part of the Roman Empire, where emperors were more likely to be worshiped than the god of the relatively new Christian religion.  Her father, Dioscorus, confined his apparently beautiful daughter to a tower which he kept guarded.  It is said that he wished to keep her protected from undesirable suitors and Christian proselytizers. Perhaps apocryphal, but the story goes that her father kept her so isolated that food and other supplies were sent up to her in a basket on a rope.  Perhaps due to her keen observations of the predictable patterns of the sun, moon, and tides—or perhaps because Christian writings were placed clandestinely in her basket—Barbara became interested in the new religion and eventually converted.  One time, while her father was traveling, she instructed one of his workers to make a third window in her tower; three windows, the story goes, would symbolize the Holy Trinity.
When her father returned and discovered her conversion, he flew into a rage, demanding that she…
renounce her new religion.  Barbara refused.  Her father turned her over the Roman officials who tortured her and subjected her to the public humiliation of standing naked before the people of her town—but, it is said that God’s angels covered her in a fog. Barbara would not forsake her new faith, so the Romans demanded that her father kill her.  His initial attempts were not successful—Barbara, instead, appeared more luminous after surviving each attempt—until, finally, he took his sword and beheaded her.  Flames are said to have erupted from her body and then lightning struck her father dead.
Although Barbara’s martyrdom is said to have taken place in 267, there is little if any mention of her in early Christian records until the 7th century.  In the 9thcentury, she clearly had a following, but lingering questions about the authenticity of her story led her status to be reduced in 1729 and, in 1969, she was removed from the official Roman Calendar of Saints, the Tridentine Calendar, that determines (as I understand it) which saints the Pope honors.
Nonetheless, Saint Barbe remains the saint to call upon to protect oneself from lightning (remember her father’s death); any accidents relating to explosions from gun powder; and work-related dangers of violent death. She is patron saint of architects, builders, stone masons (remember the third window that she had built in her tower), military engineers, artillerymen, miners, and sailors.  (I can see that this saint has been busy in her namesake in California; but, I have to confess, that her role in growing wheat, an association promoted in Provence on this day, was unclear to me.)
The Wheat of Sainte Barbe is Planted on December 4th.  People all over this region have been busy planting wheat seeds (or lentils) in three small containers, symbolizing the Holy Trinity.  Called le blé de l’espérance or le blé de la Sainte Barbe—the wheat of hope or the wheat of Saint Barbara—these packets of seeds are available everywhere and often the proceeds go to a charity for children.
The seeds are usually planted in three shallow bowls filled with a light soil or a damp cotton fabric which are then placed in sunny windows to germinate.  With a little luck (and perhaps some assistance from Sainte Barbe), the seeds will sprout and grow tall and full, portending a prosperous year.
In Provençal, “Quand lou blad vèn bèn, tout vèn bèn,” or “When the wheat goes well, everything goes well.”
On Christmas Eve, red ribbons are wrapped around what are hopefully luxuriant bundles of greenery and the plants can then adorn the table for the Great Supper (Le Gros Souper).  The plants can also be used to decorate the crèche of Santons and, after the season, planted outside to encourage a good crop.
The Santons are arranged in the Nativity Scene on December 4th.  Santons, the handmade, painted clay figurines that depict the Holy Family and the people who inhabit the 18th and 19th century villages of Provence are arranged in the family crèche —and rearranged as time passes to illustrate the passing of the days (e.g., to mark the progress of the three kings toward Bethlehem).  The etymology of the word, Santon, is not precisely clear; it probably comes from the Provençal word for little saint, “santouon” or perhaps from the Italian word for beautiful saint, “Santi Beli.”
The Santons range in size from itsy-bitsy (half an inch tall) to the comparatively giant size of eighteen inches.  The sizes are used to provide the illusion of distance by placing the smallest Santons in the rear to look farthest away.  They are created from molds and fired in kilns at 900 C (1650 F) for about two days. Some are simply painted and others are elaborately adorned with highly detailed clothing, baskets, hats, scarves, fishing nets, baguettes and the like.

The characters range from the pious to the silly and secular.  Baby Jesus may be surrounded by his immediate family, but in the distance the fish monger and the ravi (the village “simpleton”) may be looking on. There are butchers, bakers, and candlestick makers; painters and musicians; vendors of lavender, fruit, and pies; hunters of assorted animals; and farm and domesticated animals.

Most of the characters are from the 18th and 19thcenturies which has led well known writer Peter Mayle to ponder.  In his book entitled “Provence A – Z,” he writes:
While I have a great respect for tradition, I hope it won’t be long before we see a few figures around the crèche that reflect the more contemporary side of Provence.  The plumber, the postman, the electrician, the man who installs satellite TV dishes, the driver of the UPS van, the local garage mechanic, perhaps even the occasional tourist—surely they deserve to be involved during what is, after all, the season of goodwill to all men. (239-240)
I wonder if Mr. Mayle knows that some santonniersand santonnières will make santons in your own likeness, as a sanglier hunter or a priest or as the ravi, if you prefer (but probably not as the baby Jesus!).
The Santonscame to life in the late 18th century when the churches were closed during the French Revolution.  People were unable to enjoy the church crèches (or the living crèches) and crèche makers (who usually created the carved wooden figures that populated the church nativity scenes) were out of business; so, the craftsmen began making santons for the general public.  The endeavor was a huge hit and a tradition was born.

The first Santon fair was in Marseille.  It wasn’t long before there were Santon fairs in many villages.  Today the Marseille fair is thriving, as are ones in Aubagne, Aix, Arles, Tarascon, Sisteron, and Fontvieille (naming just the few with which I am familiar).

There are also ateliers (studios) that allow visitors; most notably is Santons Fouque in Aix-en-Provence (www.santons-fouque.com).  And there are very interesting Santon museums; most notably are one in Les-Baux-de-Provence and another in nearby Maussane-les-Alpilles.
Santons have become part of our family Christmas tradition and our family continues to grow with each trip to Provence (our family of Santons, that is!)  Now, it is time to go plant the seeds—may they grow so tall that they touch the ceiling and I’m made to feel like Seymour Krelbourn—and dust off my old Santon friends!
Share this post...

Print
2011-12-05
Previous Post: MEET ME AT LES DEUX GARÇONS: A SEQUEL TO “MIDNIGHT IN PARIS”?
Next Post: ‘TIS THE SEASON FOR VERRINES DE NOËL!