One of Lourmarin’s most celebrated residents was French writer-philosopher Albert Camus. But 50 years after his tragic death in a car crash at only 46, questions linger about his still-emerging multiple identities as doomed Resistance hero, compulsive womanizer and consumptive Algiers slum boy turned advocate for the underdog.

Born in French Algeria in 1913, Camus first came to Lourmarin in the wake of his philosophy mentor Jean Grenier, a writer who had taught Camus in Algeria and whose ties to the quaint Provence village (where La Bonbonnière is located) dated back to the 1920s. Captivated by Lourmarin’s “bewildering” beauty and village life, Camus bought a house there in 1958. From its terrace, he could see views of the Luberon mountains that reminded him of his native Algeria. Only two years later, Camus was buried in Lourmarin.

Controversy erupted last year when French president Nicolas Sarkozy announced plans to move Camus’ remains from Lourmarin to the Paris Pantheon, an honor reserved for France’s most illustrious heroes. Pundits and politicians sparred over whether the Nobel prize-winning author of L’Etranger

(usually translated as The Stranger

but sometimes as The Outsider), belongs in– or would even have wanted to lie in– a national shrine to the country’s most revered insiders. One of Camus’ children put an end to the plan– for now– but some commentators say the possibility remains.

A SLUM BOY FROM ALGIERS

Camus was born in French Algeria in 1913 to a family of “pied-noirs” (literal meaning: black feet), a pejorative term then commonly used for Algeria’s white French colonists until their exodus to France after Algeria’s independence in 1962. Camus’ father, a struggling farm laborer, died in World War I when his son was a year old. Raised by his partially-deaf mother, the boy grew up in the slums of Algiers, where he developed an enduring solidarity with the impoverished.

Camus’ intellectual bent won him a spot in the lycée, however, and a ticket out of the slums. He went on to the University of Algiers, and earned the equivalent of a Master’s Degree. He also developed a passion for football (soccer), which he said taught him important life lessons about loyalty, spunk and fair play. But his football career was brutally cut short when he came down with tuberculosis. The French army also rebuffed him because of the disease.

AN ENGAGED WRITER AMID POLITICAL FOMENT

Ever passionate about human rights, Camus was politically engaged as a writer and working journalist. He joined the French communist party in the mid-1930’s, before a falling out over the issue of Algerian independence. He alternately espoused anarchism and socialism.

A pacifist when World War II began, Camus was galvanized to resist after watching the 1941 Nazis execute Gabriel Peri, a prominent communist journalist and anti-fascist, shot for opposing the Nazis.

, a 1942 novel about a disenfranchised man condemned to death for the senseless shooting of an Arab. The man, a remorseless atheist, is ultimately reconciled to his fate in his condemned prisoner’s cell when he accepts the meaninglessness of life.

Camus returned briefly to Algeria, then joined the Resistance in France. He became editor of the underground Resistance newspaper, Combat, and covered the Allied liberation of Paris for the paper in 1945.

A staunch human rights advocate known for his fierce intellectual honesty, Camus denounced Nazi brutality, Franco’s fascism and Soviet totalitarian efforts to crush workers’ protests behind the Iron Curtain. Camus was one of the few French intellectuals to protest the American atom bomb drop on Hiroshima at the end of the war. But many found him uncharacteristically conflicted during the Algerian war (1954-1962), when he identified with Algeria’s French settlers and backed the French government.

Although often linked with existentialism, Camus came to reject the philosophy, espousing instead the absurd– the idea that although people crave meaning, life does not offer real meaning. The world is merely indifferent. He was also a pacifist passionately opposed to capital punishment.

Traveling in the intellectual circles of the period, Camus met the existentialist philosopher Jean-Paul Sartre in the late 1940s. After the war, he hobnobbed with Sartre and other intellectuals in popular Left Bank cafes like the Cafe de Flore on the Boulevard Saint-Germain. Eventually, he fell out with Sartre over his opposition to communism. Camus was also interested in the idea of a united Europe, an idea espoused in the mid-1940s by George Orwell.

Camus’ literary output includes novels, the best-known of which are L’Etranger

, 1938). As a journalist, he also wrote for publications ranging from the anarchist publication Le Libertaire to L’Express.

When Camus won the Nobel Prize for literature in 1957, he became the second-youngest writer to win the honor after Rudyard Kipling. He did not win the Nobel for his most famous novels, but for his human rights writing, including his essay against capital punishment, Reflexions sur la Guillotine

(Reflections on the Guillotine). French left-wing intellectuals heaped scorn on him when, during his acceptance speech, he explained his ambivalence about the Algerian conflict by saying he worried about repercussions against his beloved mother.

Camus was drawn to Lourmarin by his friend and mentor Jean Grenier, a writer who was a profound influence on him. In this “solemn and austere landscape despite its bewildering beauty” (ce pays solennel et austère malgré sa beauté bouleversante), Camus found a refuge ringed with mountains that reminded him of his native Algeria. As he put it, this temporary home (“terre de passage”) quickly became his home base (“terre de patrie”).

In 1958, Camus and his wife Francine bought an ancient silk loft in Lourmarin that had belonged to a surgeon. This converted manse, where silk worms had once been bred, became their new home. Still an avid soccer fan, Camus often watched local athletes play soccer, and had coffee with them later at the Hotel Ollier. In this quaint Provence village, Camus wrote Grenier: “I am following your footsteps.”

Camus died on January 4, 1960 at age 46 in Villeblin near Sens, just south of Paris, when the car he was in, driven by his publisher friend Michel Gallimard (of the famous French publishing house), hit a tree on a slippery road. Gallimard died several days later.

Despite his untimely demise, Camus was far from forgotten by his beloved Lourmarin. He was buried in Lourmarin, where visitors can go on walks entitled “On the footsteps of Albert Camus” (“Sur les pas d’Albert Camus”) past his house, a street named after him (la Rue Albert Camus), and his favorite haunts. The walk is peppered by readings from his best-known works. There are periodic Camus exhibits in the area. Scholars can also visit the Centre Albert Camus in Aix-en-Provence, which houses Camus’ collection of papers.

LOURMARIN’S ADOPTED SON: A MAN OF MANY WOMEN

In recent years, another side of Camus has emerged alongside the intellectually honest literary icon who fought for the have-nots. With his Bogart-like physical appeal (one often-used black-and-white photo shows him jaunty in a trench coat with upturned collar and a cigarette dangling from his lower lip), Camus also lead an active amorous life both in and out of marriage. His ill-fated 1934 first marriage to a morphine addict soon dissolved amid sexual adventures on both sides. Six years later. 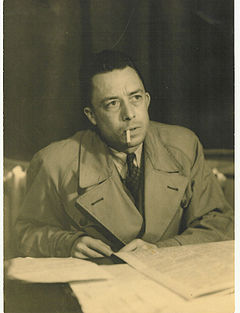 In 1940, Camus married Francine Faure, a mathematician and pianist with whom he had twin children. But Camus was a frenetic ladies’ man. As he tied the knot a second time, he was heard publicly scorning marriage, declaring that the institution was not for him. His multiple affairs are said to have driven his wife to attempt suicide. In 1997, never-before published love letters to his numerous paramours became fodder for a telling biography, Albert Camus: A Life by Olivier Todd. Camus was dining out with one of his many women in 1957, according to Todd, when he got word that he had won the Nobel Prize. His own letters show that he had several clandestine rendez-vous (with different women) lined up when he died abruptly at age 46.

“It would be an extraordinary symbol in my view,” the French national daily Le Monde reported Sarkozy said.
But French intellectuals attacked the proposal as politically opportunistic in a leader who has made much of mocking books. The plan, which Sarkozy said required Camus’ two children to approve, stalled when his son Jean said his libertarian father would not have wanted the honor.

One pundit acidly opined that Camus might find the Pantheon’s marble a bit too chilly after the balmy climes of Provence. “Reinter Camus’ remains in the Pantheon?” the The New Statesman quoted former TV literary host Bernard Pivot as saying, “for a Mediterranean who always celebrated the sun, it would be quite cold there. Everything in the writer’s life and work suggests that he would not have appreciated this kind of honor and official display…”

Print
2010-10-24
Previous Post: IT’S ALL ABOUT FOOD: FRENCH IDIOMS INSPIRED BY FOOD
Next Post: DON’T FORGET PROVENCE IN THE WINTER